In defense of smartphones: the stay-at-home parent's perspective

Well, it's that time again - we're having a big hate on smartphones. First, it was that viral "I Forgot my Phone" video. Now it's Louis C.K. giving voice on Conan to a major millennial concern; apparently our phones have turned us into isolated islands of Facebooking and Tweeting, and apparently we're incapable of setting them down and simply "being human" (by his definition, humanity is judged by our ability to suffer existential crises in quiet moments). Judging by massive FB shares and retweets, it seems people are rushing to their smartphones to agree.

Sigh. Not gonna touch that last bit of irony, but I'm still here to call bullshit.

The central premise of this argument - that a piece of popular technology can alter human nature and even damage our social framework - seems fundamentally flawed. And to suggest such a sea change came about within the past five years or so seems fairly short-sighted. Anecdotal, pathos-begging proofs lace the glowing generalizations of inspirational short films and the snarkasm of superstar comedians; like horoscopes, these bits of wisdom and semi-logic are broad enough for the modern American to apply down to his or her own experience. What ensues is massive numbers of innocent people feeling guilty about their smartphones for - honestly - no good reason.

But I'm not going to feel bad about my iPhone, my busy Twitter feed, or any of that jazz. And I'm not going to take the predictable Luddite tack of thinking convenience or new technology are inherently bad. That's just lazy thinking. 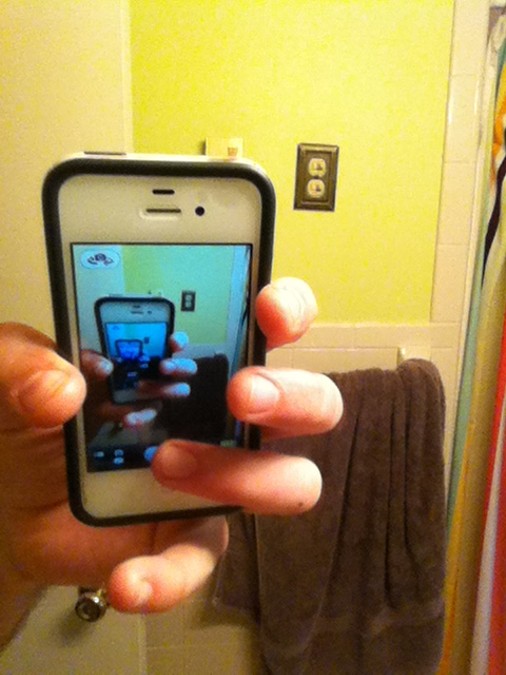 Losing Ronin - and wanting the kids to remember him

This past Friday we had one of our dogs put down. He was old-before-his-time sick and wasn't able to do much of anything anymore, but it still hurt. Ronin was with me 10 years, since he was a puppy small enough to sleep on the pillow by my head. In his last six months, though, he had four or five serious things wrong with him - some of which had been building for years - and it became distractingly obvious that he had simply run out of time.

Our daughters won't remember him, and that's been one of the hardest things to deal with. I guess on some level I knew that would be the case, even if he made it to 11 or 12: Sarah is 3 and Lucy is closing on 1 1/2, and permanent memories don't fully set in until 4. I know he's just a dog, but Ronin was my dog and he was part of the family. 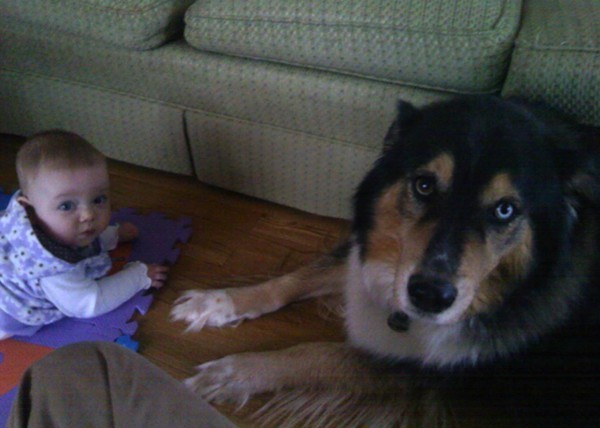 After a recent trip to the park with my mom, Luki came home talking about a boy he'd met there. "He was different," he told to me. "He was a big kid, but he talked like a baby and he didn't know how to play the same games as me."

My mom explained that the boy had a developmental disability; she thinks it was Down 's syndrome. She also told me that, at first, Luki acted afraid of the boy and called him a monster because of the way he looked and spoke. She talked to him about the boy's condition and after some time at the park, Luki relaxed a bit, but he never got comfortable enough to approach the boy and play with him.

My new way to stay connected

If you had asked me five years ago what my plans were for a gorgeous spring afternoon - like the ones we've been having lately - my answer would have undoubtedly involved a nice patio and a cold beer. But these days, with two young boys constantly running around, I enjoy the warm weather in a completely different way.

One of my earliest childhood memories is of participating in peaceful demonstrations against Fidel Castro's regime with my mother. Once, we were even detained by the cops and taken to the police station. My mother was kept in jail for a few days while my younger brother and I were allowed to go home with our dad. (Yes, my mother was, and still is, a total badass.) So, when I found out there'd be a march and rally in Charlotte for immigration reform, I did not think twice about showing up with both my kids.

Sticking to a schedule

Before we had kids, Tony and I lived by the seat of our pants. We'd decide to go to a movie in the middle of the week five minutes before it started; throw house parties for no reason; find last minute flight deals and hop on planes to foreign countries just because we could. We were spontaneous and exciting and I liked it that way. If life got too predictable I became antsy and irritated, I was afraid that we would turn into my biggest fear: an old, boring couple.

Oh, how things have changed. I've realized that the answer to life with two young children is to keep a military-style schedule. If I have to run out at the last minute to buy an ingredient for that night's dinner or the baby skips his nap, we fall into a downward spiral of screaming children, ignored bedtimes, and irritated parents.

These days, there is nothing I find more comforting than routine.

Conversations (not) about race

Last year, during the height of the Trayvon Martin news cycle, I wrote a post in which I wondered if I should talk to my young son, Luki, about racism. Should I explain to him that, because of the color of his skin or his ethnic last name, he would have to tread extra carefully around certain people? Should I tell him that, regardless of his actions or intentions, he would always be perceived by some as a threat?

I wondered these things for a while and then forgot about them as the Trayvon story stopped being front and center news. But on the year anniversary of his death, and then Martin Luther King Day, I was confronted with the issue again.

Bathing with young kids is no big deal

There's a picture posted to Instagram of Chicago bishop Larry Trotter in the bathtub with his 4-year-old granddaughter that's been the subject of a heated debate on social media lately. I first saw it on a blog, and a few days later one of my friends posted it to Facebook - in both instances, the comments were overwhelmingly negative. Trotter was called a pervert and a pedophile, the girl's mother regarded as completely irresponsible, and some even suggested that Child Protective Services become involved. Personally, I think that Trotter's only sin is poor judgement for posting the picture to the Internet.

I can't say I'm surprised about the negative reaction the photo has received. There are a few pictures on my phone of Tony in the bath with our boys that I haven't posted online to avoid potential accusations of impropriety. But - and now I'm the one exhibiting poor judgement by declaring this to the Internet - generally speaking, I don't think it's wrong for a child to take a bath with a trusted adult family member. My kids do it all the time.

Growing up and liking it

I didn't want to say anything before because of Murphy's Law of Children. You know, the law that says: Thou shall not brag about anything your children are doing lest you want them to immediately stop doing it. But it's been over a month now, so I think it's finally safe for me to announce from the bloggity mountaintops that:

MY BABY IS SLEEPING THROUGH THE NIGHT!!

That's right! I am getting eight hours of sleep on the regular. There are no more 2 a.m. nursing sessions in my house. A 28-inch long human is no longer taking up all the space in my bed and relegating me to the furthest corner of my king sized mattress. I can fully enjoy an evening out (or in) without worrying about the baby waking up and cramping my style.

Life as a family of four is starting to fall into place.

Race consultant should come to CMS

A few weeks ago, I entered my son Luki into CMS's magnet lottery. I have been praying ever since, that he gets a spot in a pre-k classrooms at one of the magnet Montessori elementary schools. I want him to get into the program because having him in a public school as a 4 year old will save us tons of money on daycare, but also, and most importantly, because it would guarantee that he won't have to attend our neighborhood school.

You see, I've been doing some research on our neighborhood school, and it ain't pretty. Its students consistently perform below the CMS average in all subjects, and last year only 58 percent performed at or above grade level.

There's also another statistic I looked at that helped shape my opinion about the school. It's something I've struggled coming to terms with. It's even made me feel like a hypocrite.

I looked at the school's racial makeup. When I saw that less than 5 percent of the students are white, I considered it a red flag.