@ Large | Creative Loafing Charlotte
Switch to the mobile version of this page.

• The Mantras with The Werks — free show! — at Neighborhood Theatre

• Christmas in July at Strike City

• 2011 Independence South American party at On The Roxx Southend 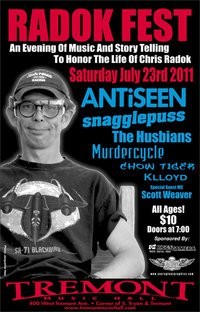 Events The sweetness is at Mez/Kazba

There's no need to sugar-coat. Sweetness is in the air at Mez and Kazba during its special Candy Land Party, presented by dbraun Promotions, Elevate Lifestyle and Charlotte Seen, this Saturday, July 23. Models will be covered in confectionery and edible attire during a fashion show set to stimulate the sweet tooth. Folks attending should dress in their candy-themed best for blending in with the delicious decor, as well as for a chance at winning a $500 VIP table. Let the game begin. 10 p.m.-2 a.m. Mez and Kazba at EpiCentre, 210 E. Trade St. www.mezcharlotte.com. 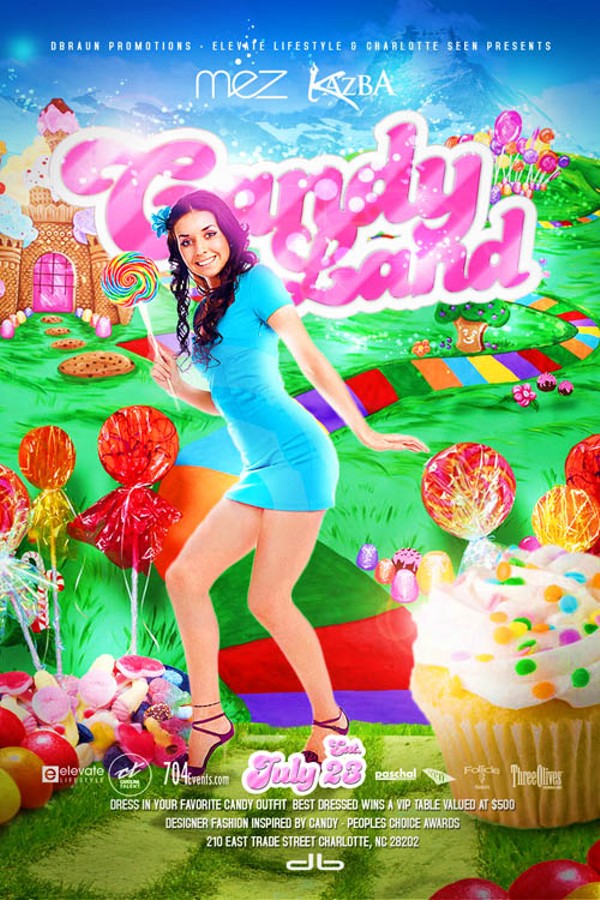 Jumaane Torrence knows the importance of innovating and then sticking to your guns. That’s what he’s done with his entertainment venue/nightclub Tempo, which celebrates its six year anniversary this Friday, July 22 with a show by Rudy Currence and Ida Divine. 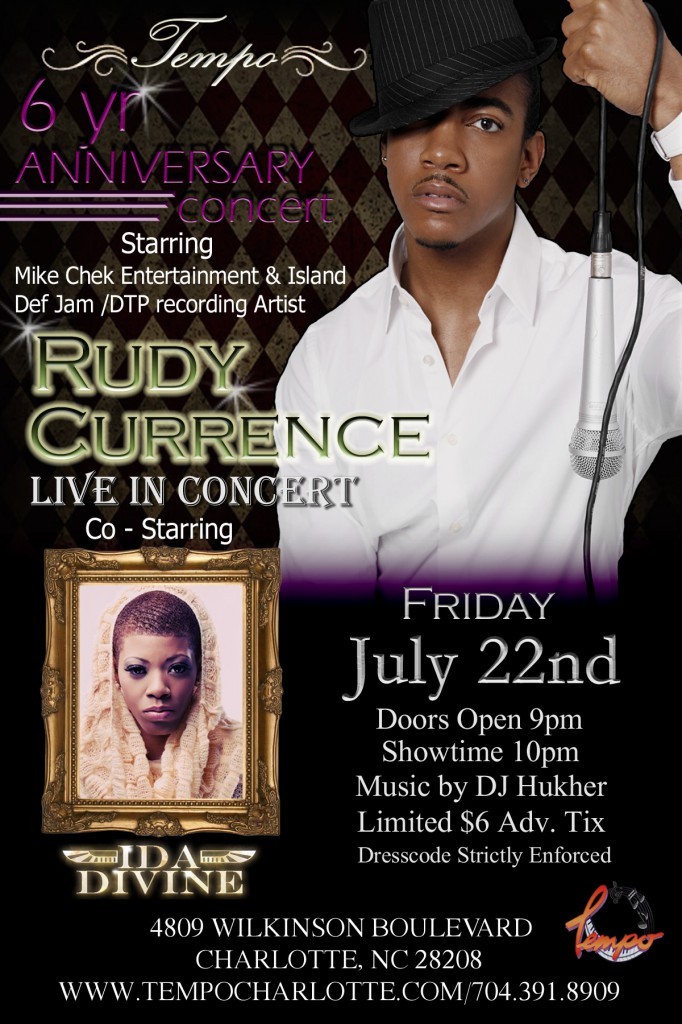 “I think the main thing we can attribute our success to is having a vision beyond the norm,” Torrence explains. “A lot of venues, promoters and establishments kind of piggyback what others are trying to do instead of carving a niche for themselves in the market. My goal here was to just study the market and see what was missing and try to fill a void, and in doing that create your own culture and carve a niche.”

Tempo’s niche is based on their focus to bring in a variety of top performers and artists, instead of just opening the doors and offering drinks and a dance floor.

The club, which is 25 and up, is strict when it comes to the age requirement and their dress code, which prohibits such pieces of apparel as ball caps, jerseys and T-shirts. Torrence points out that it’s important for patrons to know that everyone is held to the same expectations.

Tempo’s success hasn’t been lost on the competition, which at times has tried to copy their formula.

“That’s been our challenge since the day we opened, and that’s why we always try to stay ahead of the pack. There are a lot of venues that have piggybacked our concept, and most of them have failed,” Torrence says. “A lot of venues have opened up saying they’re going to be 25 and up, with dress requirements, and then after the first couple of months they pretty much drop all their standards and pretty much let anyone in just for an extra dollar.”

While Tempo’s success is due in part to staying true to their original concept, Torrence still realizes how important it is to not become stale.

“We don’t want to change our target audience, but instead, to keep them coming back by providing new and fresh ideas for them.”

I have a confession to make: The recent Penguin drama did not have a big impact on my life.

I did not join the Facebook page calling for a boycott. I didn’t participate in very many conversations about the issue, either in person or online. And once I heard about the current, now previous, owners’ plans to open up around the corner at The Diamond, I even secretly thought it might be nice to have the crowd split between the two camps. At least then getting a table on a Friday night wouldn’t be such an ordeal.

In case you don’t already know the story, allow me sum up the situation.

Ten years ago, Brian Rowe and Jimmy King took over ownership of the Penguin, signing two five-year lease agreements. They redid the restaurant, which first opened in 1954. The pair built the Penguin into such a successful restaurant that it was featured on the Food Network’s “Diner’s, Drive-Ins and Dives,” and it was not unusual to wait half an hour or more for a table at 10 o’clock on a Thursday night.

Original owners, the Ballentine family, decided against renewing King and Rowe’s lease, instead offering a deal the two found unacceptable. Since the Ballentines retained ownership of both the building and the name, King and Rowe were left with, in their words, no other option but to leave and begin anew somewhere else. Thus was reborn the Diamond.

As a fan of the old Penguin, I did have some concerns that the new version would be lacking. The Ballentines made clear their plans to redo the place a bit and make it fit for franchising (read: mass consumption). Still, surely they would not tinker too much with a beloved institution.

The first thing I noticed was how much brighter it was in the new Penguin. All the better to see my fellow dining companions, who were much different than I remembered. They had all turned into well-scrubbed families and high school kids with neat haircuts and nice smiles.

I was right about one thing though: It was much easier to get a table. Granted, it was around 8:30 on a Monday night, but that would have meant a full house at the old Penguin.

Congrats go out to Raleigh's DJ Forge, who won the Red Bull's Thre3style DJ competition, held last night at Phoenix. This is the second year in a row he has taken the title. 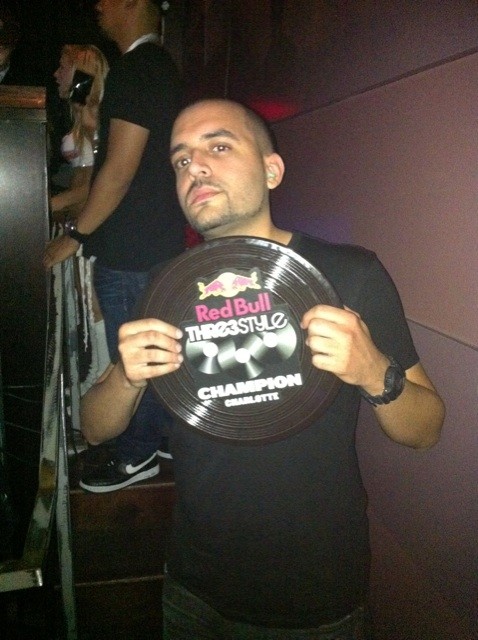 Each DJ had a 15-minute spin session, and judging was based on choice of songs, creativity, skills and of course, the audience’s response.

The vibe at this year's competition was very different from last year's, which was also held in the same venue. Being as Thursday nights are usually Phoenix's college night, the atmosphere was more about the party instead of the music. But that doesn't mean that the battling DJs didn't bring their best (even if a couple of them did look kind of nervous).

I will say, though, that I can definitely go without hearing Petey Pablo's North Carolina-praising song "Raise Up" for a while.

And I was a bit surprised that DJ Forge ended his set with Enrique's song "Hero." When he stood there, his arms crossed over his chest in triumph, as the seconds counted down to zero, I couldn't help but think, "Wow. He's really ending it like this?" It was original, to say the least. But what do I know? The crowd was loving it, and apparently, so did the judges.

• Slam Charlotte's first slam of the season at McGlohon Theatre

• Ink Floyd Presents: God Save The Queen (City) at The Chop Shop

Fans of late-night TV may only know ?uestlove as "the guy from the Roots with the big afro who plays the drums on Jimmy Fallon's show." But real music heads know that he's also a super-skilled producer (banging out tracks for folks like Erykah Badu and other notables) and a renowned crate-digging DJ who spins at clubs all over the world.

Check out this video, courtesy of Rebrand Media.

Events Red Bull wants to know: Who's the best spinner in the Q.C.?

You don't always like the music that you hear in the club. Well, this Thursday is your chance to help decide who THE best spinner in Charlotte really is.

Charlotte is the last stop for Red Bull's Thre3Style DJ competition. This Thursday, July 14, seven of the most wanted and begged for DJs will be spinning all in the same place and for the same reason— to win the title of the City's Best DJ and get the chance to move on to the National Finals.

A 15 minute spin session will include three different types of music. Judging will be based on choice of songs, creativity, skills and of course the audience's response.

Large and in charge DJ Z-Trip will not only be performing but is also one of the three judges for the contest.

The DJ who earns the title of Charlotte's best will advance to the National Finals held in Las Vegas. The overall winner of the Nationals will then move on to compete in Vancouver, British Columbia, for the Red Bull Thre3Style International Final and earn the overall champion title.

This competition isn't about what tricks you can do behind the booth — it's how many hands you raise in the air and how many people get out on the dance floor.

What better place than one of the hottest clubs in Charlotte, Phoenix, to have this event. Doors open at 8 p.m. but the actual competition doesn't start till 9 p.m. $5 cover.

Find out more from watching this video.

The Deal: Dharma Lounge hosted Charlotte's Dirty Mega Party on Friday, July 8, with a high ollie contest and homemade bikini contest and I had to see what was up.

The Good: The skate contest was the first thing to catch my eye. Even though I didn't see many kids succeed at the hurdle, it was pretty entertaining to watch them crash and burn. Inside the room people were grouped together at bar tables like a high school cafeteria. I found myself in a sea of eclectic people from emo, punk, business and preppy. People were dressed grungy in torn clothes with messy uncombed hair, glammed up like a high fashion 80s model and the usual try-hards where they looked like they had stepped out of a GQ magazine. The cozy lounge area in the corner was perfect for my minute escape from the loud crowd and booming sounds coming from the DJ booth. Non-stop electric dance beats filled the room; however, I didn't see anyone actually step out and dance.

The Bad: The main reason I was so excited about going to the club was to see the homemade bikini contest. Unfortunately, it was going to be closer to the end of the night. I wasn't going to stay that long, and it seemed like the crowd agreed because I kept noticing people sneaking out.

The Verdict: Even though I had the major disappointment of not seeing the bikini contest, the bar's atmosphere itself made up for it. It's opposite from the typical Charlotte club scene with rap music — that is nice to get away from sometimes. You don't see the same ol' group of trendy fashionistas and gangsta swag guys grinding to the same top 40 hits we hear all the time.

And here are some photos.

Life in the Night Charlotte: A city of freaks

It took a minute to register.

In fact, it didn’t hit me until my friend stopped to ask, “Did that guy just call me a freak?” Indeed, he had.

To be exact, as he passed us he’d said, “All these freaks around, like this kid.”

We were in Uptown for the second Buskapalooza, an organized busking event put together by April Denée to raise awareness about her upcoming documentary Busk! We’d been on the street less than five minutes.

The man was with his wife. They both looked to be in their mid forties. She didn’t say anything, or at least refrained until we were out of earshot.

My friend, who fronts a local punk band, has blue hair, which was enough to qualify him as a freak in this man’s opinion.

Now, I know this is merely an isolated anecdote and that a middle aged guy walking around Uptown thinking anyone who looks vaguely different is inherently a freak isn’t the most shocking of realizations. Yet, I can’t help but feel that it’s more emblematic than I’d like to believe.