100 Words Film Festival forces filmmakers to get to the point | Cover | Creative Loafing Charlotte
Switch to the mobile version of this page.

100 Words Film Festival forces filmmakers to get to the point 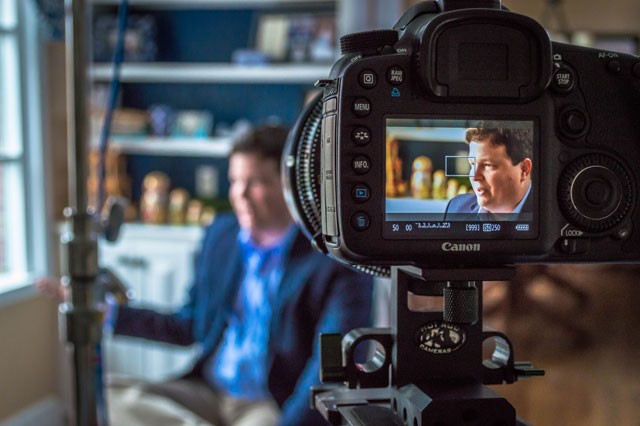 Optics is one of the 30 films to be screened at the festival.

Emmy-winning documentary filmmaker Linda Midgett started with a dozen hours of footage. To meet the challenge set forth by the 100 Words Film Festival — make a movie that contains exactly 100 spoken words — she had to whittle that down to one sound bite.

But that sound bite was longer than 100 words, so she was forced to edit further. One hundred-and-one words would've disqualified her film. So would 99.

"I thought about it a long, long time before deciding on this particular sound bite," she says.

Her not-quite-two-minutes-long movie Optics is about immigration. That's a weighty and controversial topic to be cut down to a few sentences. But people are more likely to pay attention to a pithy message than a long-winded one. And ultimately, all directors, writers (and anyone with something to say) want is for people to listen.

And let's face it, it's easier to pay attention when the message is on point. We live in an age of sound bites, and that's not all bad. Our busyness means we often tune out all but the most compelling messages. Our time is limited, and anyone with a story to tell ought to respect that.

A filmmaker who's worked so hard to limit his story to 100 words is probably worth listening to. (Hell, even if you don't like the story, you won't have invested much time in it.) And if you do like the story? A tight 100 words may leave you wanting more.

The 100 Word Film Festival, coming to McGlohon Theater on Nov. 22, respects our time, honors our short attention spans and promises to give us just enough. No more. Audiences used to getting their messages and stories in brief spurts will appreciate the format. But they should also consider just how tough it was for the writer/director to tell a complete story — and tell it well — under such strict constraints.

Midgett says the 100-word rule was more than a gimmick. It was a lesson in good storytelling. "If you can't distill your message into 100 words, you probably don't know exactly what you're trying to say," she says.

In fact, she says it's a good practice for any film. "I wish I had time to do this with all the films I've ever produced," she says. (Yes, paradoxically, it takes more time to be brief. As Blaise Pascal, Ben Franklin or Mark Twain said — and it's been credited to each of them — "If I'd had more time, I would have written a shorter letter.")

"It's like producing a poem instead of a film," Midgett says. "You are forced to get to the heart of the matter, and that's a valuable exercise when it comes to any form of communication, whether it's writing or film. There is nothing worse than a muddy message."

There's nothing superfluous in a 100-word film.

A good story is essential to a good film. Without it as a foundation, good acting, cinematography, sound and costume don't much matter.

It all starts with the story.

Galloway, a filmmaker himself and founder of Susie Films, a Charlotte-based production company, got the idea for the 100 Words Festival from watching how his own three children watch video content. They want to know how long it'll take to get to the end. (And isn't that true for all of us? We want to know how the story will end and how much time we have left.) One hundred words, he says, leaves you wanting more. A 100-word film doesn't overstay its welcome.

More than 60 entries from all over the country (and some from other countries) were submitted. Galloway and his team culled the field down to 30 films. Student, documentary, comedy, horror, drama are all part of the mix. And the films will play in rapid succession. There's little to no down time. If you don't like one movie, don't worry, Galloway says. Another will be starting in a minute or two.

It's a plus for the audience, but it's not a bad deal for the filmmaker either. Even an audience comprised of smartphone addicts with ADHD can remain rapt for a couple of minutes. The challenge here for the filmmaker isn't in wondering: Will the audience pay attention long enough to get this? The challenge is in the screenplay — or in the editing room, in the case of a documentary. The filmmaker has to be concerned with telling a fully formed story — with build-up, a climax and a denouement — in just 100 words. (That's an average of just 33 words allotted to each phase!)

A $20,400 grant from the Knight Foundation, the event's lead sponsor, gave further credibility to a new festival. The funds went to creating the website, marketing and promotions and creating an infrastructure for directors to submit their films.

The 100 Word Film Festival may be in its first year (and Galloway hopes to make it an annual event), but it has attracted a wide range of talent. Some established filmmakers have entered the contest and plan to attend. Galloway says that's one of the draws for movie lovers — the opportunity to meet and interact with the directors.

THE FREEDOM OF LIMITATION

Anna Christopher is a writer and director in Los Angeles whose 100-word films (she entered three shorts that are related conceptually) will debut at the Charlotte festival. (In fact, every film being screened is a premiere, which Galloway says is rare on the festival circuit.) Christopher directs short films, commercials, branded content for the Internet and also works as a screenwriter in film and television. She's in her second season as a staff writer on the MTV show Awkward.

She says the 100-word constraint may have resulted, for her, in a better finished product. "By having to edit ourselves down to 100 words, we learned that constraints and limitations challenge you to think outside the box and often result in a story or project that is more interesting, unique and inspiring than it would have been if you had all the words or time or budget or actors or equipment ... you wanted," she says.

Christopher's concept, called Lisa's Advice, is a comedy that started, she says, "as a joke over a hangover-fueled breakfast at IHOP" with a filmmaker/actress friend, Regina Taufen.

"The characters and their world kept making us laugh, so we decided to shoot something," she continues. "We pitched each other dozens of scenarios, whittling the list down to what we found to be the funniest and most diverse material."

An audience must be able to believe a film's characters. Perhaps we couldn't relate to Hannibal Lecter, the psychopath from Silence of the Lambs, but we could feel the tension, fear and false bravado Clarice felt. Think about trying to develop a relatable, complex character in 100 words. Make that 50 or so words, since that one character probably won't do all the talking.

If Christopher's and Taufen's characters, not yet fleshed out or even scripted, were already making them laugh, they had to figure they were onto something.

Lisa's Advice is now a total of 14 installments, all under one minute in length, shot in one day on location in Los Angeles.

Coughing Up Blood, another one of Christopher's three festival entries, initially weighed in at a super-economical 58 words. Not enough for her film to qualify. "When we revisited the footage, we found lots of gems we had overlooked when we were in the thick of the edit process," she says. "Time away from the project and the edit room — and the need to find 42 more words — liberated us to see that old footage in new, exciting ways."

Another good lesson for anyone tasked with telling a story: Walk away from it, if you have the time. Come back to it with fresh eyes.

David Johnson is another professional filmmaker whose work will be showcased this weekend. The former school teacher started his company, Silent Images, eight years ago after being part of a trip to photograph the aftermath of the genocide in Darfur, Sudan. Silent Images is a nonprofit that provides professional film and photography services to other nonprofits. Johnson's work has taken him to Cambodia (to tell the story of human trafficking) and Liberia (to tell the story of the spread of Ebola).

His film, Beyond the Skyline, clocks in at about five minutes. It deals with human trafficking, child homelessness, disabilities and refugees in Charlotte.

Johnson says sticking to the 100-word limit was tough. "We started with literally thousands of words and had to dwindle four interviews down to about 15 words each to tell the story of each area," he says.

And yet, the constraint — and resulting brevity — turned out to be an important component of the story. "If done right, it can leave enough quiet space for the viewer to have to fill in the rest of the story and reflect on the message. Sometimes, saying fewer words provides more emotion," he says.

Dialogue, as any writer knows, is tough to master. (Nothing can hinder the forward movement of a story like poorly written dialogue.) It's a challenge to write dialogue that sounds natural. In real life, people don't always speak in complete sentences. We can't always articulate our thoughts. We interrupt and talk over one another. We say things that are devoid of meaning or sense.

But when you are confined to 100 words, you have no words to waste. Your characters had better say what they mean — and say it succinctly.

Linda Midgett says the limit helped her "weed out the standard messages one hears" on immigration. "Every single image, every music choice, every word is so important," she says. "[With 100 words], there is no wasted breath and no wasted moment. It's truly an art to make something compelling within this construct."

In the end, Anna Christopher says the 100-word limit taught her an important lesson. Brevity itself should not always be the goal. "I think brevity in storytelling and filmmaking is important in some cases but not in others. It all depends on the story you are telling. A story told well is often told concisely. However, for some stories, too sharp of a knife in the name of brevity may accidentally mince some of the story's heart and soul. Without those things, you don't have much worth watching.

"The trick," she continues, "is to be concise enough that the fat is gone so that the story can shine."