17 Again: When Zac attacks | Reviews | Creative Loafing Charlotte
Switch to the mobile version of this page. 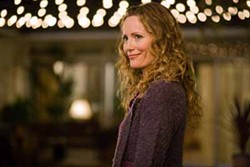 For the better part of a decade, the Disney Channel has been manufacturing squeaky-clean mannequins in the same methodical way that, say, Keebler produces Fudge Shoppe Deluxe Grahams. Like most of these youngsters, Zac Efron, the reigning Ken to Miley Cyrus' Barbie, may not be around for the long haul (for every child actor who successfully makes the transition to adult movie star, like Jodie Foster and Elizabeth Taylor, there are many more that fail), but he's presently making his case for career longevity by headlining the comedy 17 Again. He's appealing within the confines of his limited range, but like the film itself, a severe case of blandness puts a lid on any breakout potential.

The first half-hour of the film is simply atrocious, lazily cobbling together pieces from Back to the Future, Big and all those forgettable '80s body-switch comedies in an effort to jump-start its tale. Efron plays Mike O'Donnell, a high school basketball star who, two decades later, has transformed into a depressed doormat whose teenage children Maggie and Alex (Michelle Trachtenberg and Sterling Knight) hate him and whose wife Scarlett (Leslie Mann) is divorcing him. (The middle-aged Mike/Zac is played by a suitably pudgy Matthew Perry.) In the blink of an eye, Mike is suddenly 17 again, retaining his adult mindset but trolling the halls of his school looking like one of the gang. Armed with this opportunity, Mike hopes to set things right, first by helping out his two children (Maggie's romantically involved with the school bully while Alex is the perpetual target of said thug) and then by convincing Scarlett to give him (or, rather, his older self) a second chance.

Mann (aka Mrs. Judd Apatow) provides 17 Again with its heart, and she proves once again that she deserves a shot or two at more substantial roles. Beyond her, the film is completely disposable, with not enough timeline complications in its scripting and too much footage devoted to the antics of Mike's best friend Ned (Thomas Lennon), a fanboy who never grew up. The bed shaped like a Star Wars landspeeder is a cute visual gag, but by the time Ned started speaking Tolkien's Elvish language, I was ready to check back in with reality.