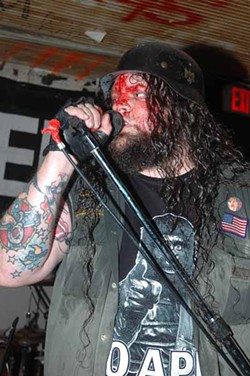 Jeff Clayton is a bloody mess. His face stained crimson from the gash in his forehead, Clayton roars out his pain and anger to a roomful of awestruck onlookers. But there's no need to call 911. For Clayton, it's just business as usual. For the past 25 years, Clayton has bled for his art as the lead singer for Antiseen, Charlotte's premier hell-raising musical rebels.

The singer's bloodletting is a tribute to the old-school "rasslers" he idolizes, who used to cut their foreheads so they'd bleed during a match. Clayton opens his up with a beer bottle, using the indirect method. "I break the bottle over the mike stand, then ram the jagged edge into my forehead," he confesses.

The musical accompaniment is a raw, rough roar that has the attitude of punk, the punch of metal and the stiff backbone of hard rock. "It's painfully obvious that we love the Ramones and Motorhead," Clayton says from his Rock Hill, S.C., home. "But we've never really been concerned with how people would categorize us. We've done something to be imitated more than we imitate."

Add irritation to the list as well. The band didn't make any friends with lyrics like "Fuck, fuck, fuck, the human race," from "Run My World" and titles like "Fuck All Ya'll" from 1996's How to Ruin your Groove. That stuff got them harassed by musical moralists like Al Gore's wife, Tipper, who wanted warning labels slapped on albums.

Even though that type of harassment died out a decade or more ago, the band still gets criticism from within their own music community. "We tend to say things occasionally that no one else will say, and it rubs a lot of people the wrong way," Clayton says. "Basically, we never apologize for anything we ever did. Even though our opinions about some things may change down the road, we just weren't sorry for it when we did it," he chuckles. "And some of the things we say tend to upset big groups of people."

But as many bands have discovered, negative publicity is more often more of a help than a deterrent to success. "Negative reviews of our CDs sell more copies than any of the positive ones ever would," Clayton affirms. "The people that hate you will go into extreme detail to tell why they hate you, and our audience'll read that and go, 'Man! That sounds like something I'd really like to hear.' Positive reviews really don't excite us anymore," he says, laughing.

Negative reviews notwithstanding, Antiseen has persevered for 25 years without major label support. The band always said no to the majors, a decision Clayton doesn't regret. "A lot of the bigger labels that came calling are no longer around," the singer says. "The labels we work with now, TKO, out of Huntington Beach, California and Steel Cage, out of Philadelphia, we got one for each coast, they're doing very well by us right now and we couldn't be happier."

If anybody thought they had the band figured out, 2005's Hell threw all that out the window. Antiseen assembled a head-busting genre stir of covers that had Bachman Turner Overdrive's "Taking Care of Business" rubbing shoulders with Talking Head David Byrne's "Psycho Killer" alongside Hank Sr.'s "I Saw the Light," Dylan's "Positively 4th Street" and the most astounding cover of all, Sun Ra's "Space is the Place."

Although done at a faster pace and rougher than the originals, Clayton says his heart was in the right place. "We don't do covers to be ironic or to poke fun at them. We genuinely love those artists and those tracks." The singer says they tried to bring something to it that would please the original composer. "I did hear that David Byrne liked our version of 'Psycho Killer,'" Clayton says. "That made me really happy."

But another of the band's associations turned out to be what Clayton calls a mixed blessing. Members of Antiseen (Clayton and drummer/brother Greg) teamed up with hardcore punk gross-out artist Kevin Michael "GG" Allin in Charlotte just before he died in 1993 to record a three-song EP, GG Allin and the Carolina Shitkickers. "We [Antiseen] were together for quite awhile before we ever teamed up with GG," Clayton says. "Once we did, that's all anybody wanted to talk about, and we were like, 'Hey -- we did other records besides the one with GG,'" he laughs. "We don't regret it, by no means, because that was one of the most fun periods of the band's existence."

Despite Allin's reputation for anti-social behavior on and off stage, Clayton welcomed him into his house. "He was the perfect house guest," Clayton says. "I was one of the last stops he made before he died. He would leave to do a tour and then want to come down south to mellow out, stay with me anywhere from three or four days to a week and a half."

Clayton remembers Allin as being focused and driven when it came time to record. "Wasn't a lot of partying, a lot of sitting around doing dope and drinking whiskey," Clayton says. "When he was in work mode, he was very professional."

Over the last three years, Antiseen's professional life has suffered as band members have scattered over the state, reducing his touring schedule. But with his new rhythm section, he hopes to hit the road with new product. "When you get some new blood," he says with no discernible trace of irony, "it'll come pouring right out."