42: Here's to you, Mr. Robinson | Reviews | Creative Loafing Charlotte
Switch to the mobile version of this page. 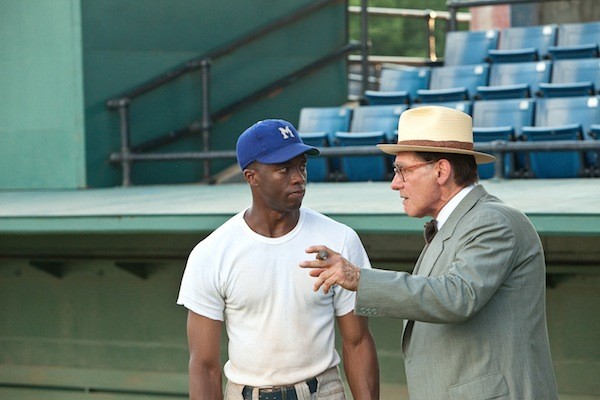 Here's to you, Mr. Robinson: a new motion picture you can call your own. It's been 63 years since the release of The Jackie Robinson Story, in which the baseball legend starred as himself, and now the first African American to play in the major leagues steps back into the spotlight with 42. The subject of this competent biopic is still overdue for a comprehensive, warts-and-all movie (after all, here was a black man who campaigned for Richard Nixon against John F. Kennedy, and who in essence betrayed Paul Robeson for the sake of Joseph McCarthy's witch hunt), but for the time being, this one will pleasantly do.

42 begins not with Robinson but with Branch Rickey (Harrison Ford), the Brooklyn Dodgers general manager who decides that the mid-1940s, right after the close of World War II, is the right time to insert a black man into the lily-white Major League Baseball ranks. Rickey insists his motivation is money — a black and white league means green from both black and white spectators — although it quickly becomes apparent that he has no love for racism. For now, though, he's determined to find the right person to break that color barrier, and he settles on Jackie Robinson (Chadwick Boseman), a terrific player from the Negro leagues. Robinson is fearless in the face of prejudice — during his military stint, he was court-martialed (and acquitted) for refusing to move to the back of a bus — but Rickey insists that the only way for this to work is for the young man to ignore the hatred that will be hurled his way. After Rickey states that "You're a Methodist. I'm a Methodist. God's a Methodist," he urges Robinson to follow Jesus' example and always turn the other cheek. It's a tall order, given that Robinson deals with challenges not only from spectators and other teams' players but also from some fellow Dodgers. Still, with his wife Rachel (Nicole Beharie), Branch Rickey and God all giving him strength (not necessarily in that order), he sets out to make his mark on both the baseball field and in the history books.

Writer-director Brian Helgeland, who won an Oscar for co-scripting L.A. Confidential with Curtis Hanson, does a good job of letting facts rather than flights of fancy steer him through this inspiring story (indeed, many of the movie-friendly lines of dialogue are actually drawn from real life), and he relates the material in a doggedly old-fashioned manner that will appeal to its presumed target audience of seasoned adults. Yet that old-school approach also ends up hindering the film, with its streamlined narration, one-note characterizations (almost everyone is either an open-minded believer or a raving redneck) and wince-inducing simplifications (a little boy is shown using the n-word after hearing his father use it; oh, so that's how racism can pass between generations!) often reducing it to the level of yet more sports saga boilerplate.

Boseman delivers an impressive performance as Robinson, Ford provides gruff humor as the crusty Rickey, and Beharie leads a strong supporting cast that includes Christopher Meloni as the Dodgers' combative manager Leo Durocher and John C. McGinley as iconic sportscaster Red Barber. It's the collective effort of these MVPs that primarily allows 42 to register as more than just by-the-numbers.

42 is not showing in any theaters in the area.