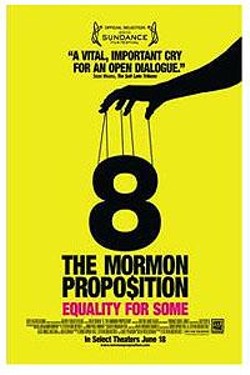 "8: The Mormon Proposition" exposes the Mormon Church's historic involvement in the promotion and passage of California's Proposition 8 and the religion's secretive, decades-long campaign against gay rights. The film takes place in California and Utah as Mormons, following their prophet's call to action, wage spiritual warfare with money and misinformation against gay citizens, doing everything they can to deny them of marriage and the rights that come with it.

8: The Mormon Proposition is not showing in any theaters in the area.