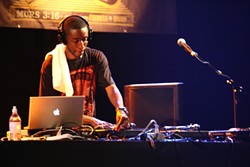 When: Sat., Sept. 29 2012
Price: $15
9TH WONDER Few people understand the Notorious B.I.G.’s sentiment on “Juicy” — “you never thought that hip-hop would take it this far” — like Grammy Award-winning producer 9th Wonder. But the Winston-Salem native has watched his studious love for the culture take him all the way to the Ivy League, where he’s currently in a year-long residency at Harvard. Along with his influential work on North Carolina’s hip-hop scene — as a member of Durham’s Little Brother, founder of It’s A Wonderful World Music Group as well as his indie imprint Jamla Records — he’s continued to perform as a DJ, where his sets take fans on musical journeys through the Golden Era and into present-day hip-hop, building on his encyclopedic knowledge of the music and an ear to flip it on its head. He’s still a very sought-after producer, with legendary MCs like Nas earlier this year naming 9th as one of the people he’d most like to work with. Don’t miss this one.
— Mike McCray