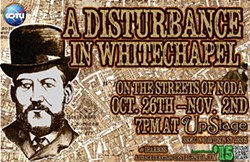 A Disturbance in Whitechapel User Submitted

When: Oct. 26-Nov. 2, 7-9 p.m. 2014
Phone: 704-236-8750
Email: cotu@yahoo.com
Price: Advance $10. suggested donation at door of $15
www.citizensoftheuniverse.org
COTU presents: "A Disturbance in White Chapel." Starting at UpStage (26th at Salud), this world premier murder mystery takes a look at the Jack the Ripper rampage. A killer is on the loose, butchering women of the night and it is up to Detective Fred Abberline to put a stop to the devil before he can finish his bloody spree. With five possible endings, the trail of comedy and blood whisks the audience one block down in NoDa and back. Only one person knows who the murderer is... and Saucy Jack isn't saying!