Analyzing the other man of steel 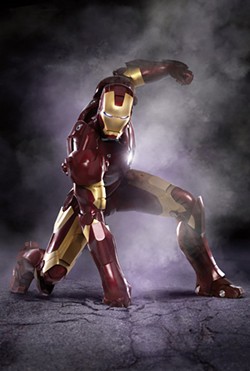 I'll be honest: When I saw the trailer for the big-budget superhero movie Iron Man, I peed my pants.

OK, I didn't actually saturate my nether regions. But after watching the short preview clip -- which shows actor Robert Downey Jr. playing the film's charismatic title character and an ass-load of action scenes -- I nearly sharted from excitement.

Then again, I'm a comic book geek. I've been collecting comics for more than 30 years. (No, I don't live with my mother.) I own more than 10,000 of the things, I write a weekly comic review column (found in this here newspaper), and I even self-published a few comics in the 1990s. Yeah, I'm a comic book geek. And while I don't love all movie adaptations of comic books (I hated Superman 3 and 4, Blade 2 and 3, X-Men 3 and, especially, Catwoman), I am prone to get stoked when a superhero film is done right (such as the first Superman, the first X-Men, the first Blade, the first Spider-Man and Batman Begins).

Plus, I've been reading about the adventures of Iron Man since I was a kid, and I've always imagined how cool it would be to view a movie about the armor-clad hero. So seeing the trailer for the first time was like witnessing the personification of all my childhood dreams. (Yes, I need a girlfriend.)

Granted, I haven't actually seen the film yet. CL's movie critic, Matt Brunson, will present a full review of Iron Man in next week's issue. Until then, I'm just going by my emotional and bodily reaction to the movie's preview. That and Shelton Drum, owner of the popular local comic book store Heroes Aren't Hard To Find, told me over lunch at Zada Jane's that he saw the film and it was the "best superhero movie ever." As a result, I'm convinced that the movie will be a monument to the glories of sequential fiction.

Of course, although I'm excited by the notion of seeing the soon-to-be blockbuster, you -- on the other hand -- could probably give a rat's ass.

And maybe that's because you, like most normal people, aren't a comic book geek. On top of that, you don't know Iron Man from Adam and Steve; he's not exactly a widely recognizable pop culture icon -- à la the Hulk, Batman, Wonder Woman or even Shazam.

I acknowledge those notions ... I really do. But look -- you should be sharting over this movie just like me.

OK, so you're not a comic book geek. But everybody loves superhero movies, right? I mean, you did see Spider-Man, Batman, Superman Returns and all the rest of those flicks starring guys in spandex. And if you didn't see those movies, you knew 10 or more other non-comic-book-reading guys or gals who bought a ticket and loved what they saw. The first Spider-Man film alone grossed $403,706,375 domestically. It's clear then that a lack of comic book geekiness never stopped anyone from seeing a superhero movie.

And if you don't know jack about Iron Man, I can remedy that. Over the decades, I've amassed a wealth of seemingly useless information about the steel-hard superhero (get out of the gutter). Now, at long last, I can share choice bits of knowledge to help folks get up to speed on this high-tech superhero just in time for the film's May 2 premiere. Here goes:

The Origins of Iron Man

Created by writer Larry Lieber, artist Don Heck, and the legendary comic duo of Jack Kirby and Stan Lee for Marvel Comics in 1963 while America fought a war in Vietnam and a Cold War against communism, Iron Man is a superhero who blends the charm and womanizing traits of James Bond with the brain of Batman and the business acumen of Donald Trump. Unlike other super dudes who run around town in their underwear, Iron Man sports a fancy suit of armor (sort of like a modern-day knight), which is filled with all kinds of high-tech weaponry. Underneath the armor, Iron Man is just a regular guy named Tony Stark (well, that is, if you consider being a billionaire "regular") who is plagued by very real flaws such as alcoholism ... and an addiction to naked women. Not that the guy's a sex addict, but let's put it this way: Lee claimed that he patterned the fictional Iron Man's alter ego off the lady-loving ways of Howard Hughes. And like Hughes, Stark is a businessman by day, heading his self-named Stark Enterprises -- a company that made a lot of money building bombs and guns.

So how did Stark come to wear the fancy red-and-gold suit and fight bad guys? To answer that, I'll reference Wikipedia: "While observing the effects of his experimental technologies on the American war effort, Stark is injured by a booby trap and captured by the enemy, who then orders him to design weapons for them. However, Stark's injuries are dire and shrapnel in his chest threatens to pierce his heart. His fellow prisoner, Yin Sen, helps Stark use the workshop to secretly design and construct a suit of powered armor that saves Stark's life by keeping his heart beating. Stark uses the armor to escape, although Yin Sen dies during the attempt. Stark takes revenge on his kidnappers, then heads back to rejoin the American forces. Back home, Stark discovers the shrapnel lodged in his chest cannot be removed without killing him, and he is forced to wear the armor's chest plate beneath his clothes to act as a regulator for his heart. He must also recharge the chest plate every day or else risk the shrapnel killing him. The cover for Iron Man is that he is Stark's bodyguard and corporate mascot."

Eventually, the shrapnel was removed, but Stark retained his Iron Man persona.

When Iron Man was created, he didn't really have superhuman abilities, per se. And unlike other human heroes like Batman, he doesn't even work out on a regular basis ... unless you consider lifting PBR tallboys "working out." The only thing that made Stark "super" back in the day was the high-tech armor he wore. When he was wearing his super suit, he was inhumanly strong, flew with the help of rockets in his boots, fired blasts of pure force (aka "repulsor rays") from his gloves and much more.

A few years ago, writer Warren Ellis concocted a storyline that actually caused Stark to be linked to his armor and gain a few superhuman abilities when he's not suited up. For example, these days Stark can "see through satellites" when he's butt naked. The movie version probably won't present these new powers, but if you pick up any current comic starring Iron Man, you'll see what I'm talking about.

On his first few adventures, Stark sported a suit of bulky gray armor (which was pretty damned ugly). It wasn't long before the character was outfitted with a shiny yellow suit (which was also ugly) and soon settled into his current red-and-gold getup. Over time, Iron Man's costume changes became a standard feature of the series; so, just like Apple releases new iPods every year or so, Stark upgrades the look and functionality of his armor on a regular basis.

Iron Man is linked to a trio of supporting characters who've been a staple of his life since the early days of his creation: Stark's chauffeur Harold "Happy" Hogan, secretary Virginia "Pepper" Potts, and helicopter pilot James "Rhodey" Rhodes.

Rhodes, played in the film by Terrence Howard, actually took on the mantle of Iron Man for a good long while after Stark became a full-fledged alcoholic. Stark eventually got it together and put on the armor again. But Rhodes dug being a hero so much, he kept on fighting evil in his own armor -- using the moniker War Machine. At one point, War Machine started wearing a suit of armor created by extra-terrestrials, but it was ugly and wack. At any rate, Howard has stated in several interviews that the only reason he took the role in the film was because he knew that Rhodey would eventually become a superhero. Anybody smell a sequel?

Iron Man is also a member of the all-star superhero team the Avengers, which he founded with other A-list superheroes like Thor and the Hulk. And in the new Hulk movie, which also hits cinema screens this summer, Downey (SPOILER WARNING!) makes a cameo appearance as Tony Stark. Will this pave the way for an Avengers film in the future? Damn ... I sharted again.

Being a creature of the Cold War, several of Iron Man's early foes were obvious manifestations of communist paranoia. He fought Soviet spies like the Black Widow (who later became a superhero) and the Crimson Dynamo as well as Chinese bad guys like the Mandarin. Most of Stark's enemies used high-tech weapons and wore "Iron-clone" armor. A few of his enemies, however, were pretty lame. One evil dude named Whiplash, for example, had the nerve to attack Iron Man with just an armor-shredding whip. What an idiot. Super-strong, invincible metal armor vs. moron with a whip; who do you think is going home with an armored foot in his ass?

Iron Man has starred in one comic book series or another since the 1960s, but not all of his appearances are worth reading. As much as I love the character, some Iron Man storylines -- such as the one where he was replaced by a teenage version of himself from the future -- were downright wack. Other Iron tales, however, were stellar. Here's a quick list of arcs that were iron-clad:

• Iron Man in Camelot (Iron Man 149-150) -- Iron Man travels back in time to the days of King Arthur with the Fantastic Four's arch foe Dr. Doom.

• Alcoholic Iron Man (Iron Man 167-199) -- Tony Stark finally succumbs to alcoholism and gives up being a superhero. In his stead, his friend Jim Rhodes dons the Iron Man armor and the name.

• Armor Wars (Iron Man 225-231) -- Iron Man discovers that a number of foes -- and a few friends -- have jacked his armor designs. So he sets out to put the copycats out of commission.

• Extremis (Invincible Iron Man 1-6) -- Stark injects himself with a nanotech virus that integrates his armor with his own biological systems.

• Superhero Civil War (Civil War 1-7) -- After a group of reckless superheroes inadvertently cause thousands of civilians to die, Iron Man pushes to get all heroes licensed by the government -- which causes a big rift between former allies.

Most of these tales are available in collected volumes and on sale at most comic book shops and bookstores.

Excited yet? After reading the last thousand or so words, I think you should be. I understand if you're still skeptical about jumping on the Iron bandwagon; at the end of the day, the movie may suck harder than an Oreck. Only time will tell. Until then, I'll play the trailer over and over again ... and invest in a box of Depends.

To find out how you can get free Iron Man comics, check this out.