A peek into the Great American Beer Festival

Although representing Charlotte breweries didn't win, the fest is a must-visit for all beer lovers 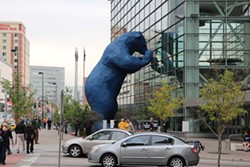 There is a giant statue of a blue bear that stands about two and a half stories high outside the convention center in downtown Denver. It seems to peer into the large glass front of the building, perhaps longing for entrance, or maybe just casually admiring the activities within. That statue became kind of a running joke during the weekend of the Great American Beer Festival (GABF), conjuring silly meme-like remarks like, "Why U not has beer for me?!"

When the weekend was over, though, I saw an interesting parallel in that bear. It may sound a little ridiculous, but it kind of reminded me of myself prior to this year: the conspicuous beer geek on the outside looking in at the biggest beer festival in the United States. You see, prior to a couple weeks ago, I had never been to GABF. I can see now why that bear wants so badly to get in.

GABF is the largest and arguably most important celebration of craft beer in the United States. Almost 50,000 beer fans come from all over the world to attend the event, spanning four sessions over three days in Denver, Colo. This year, 600 breweries were represented in the tasting portion, and more than 700 entered beers to be judged by an elite group of industry professionals, in hopes of bringing home a coveted GABF medal, a prestigious and highly marketable achievement.

Two Charlotte breweries brought home medals from GABF last year: NoDa Brewing Company took silver for its Coco Loco porter in the Robust Porter category, and Olde Mecklenburg Brewery won a silver in the German märzen category for Mecktoberfest, its Oktoberfest-style lager. No city in North Carolina brought home more medals than Charlotte did, including Asheville which, quite rightfully, has been named Beer City USA several times in a popular yearly poll conducted by Charlie Papazian, the head of the national Brewer's Association and the founder of GABF. With dozens and sometimes hundreds of beers entered in each category, this is an awesome achievement that increased both awareness and sales for those beers and the breweries in general over the past year. Naturally, both OMB and NoDa returned this year with hopes of once again returning home with some new hardware.

During each session at GABF, attendees are provided a small taster glass that they can take from booth to booth and sample beers from the participating breweries. The breweries themselves are organized geographically, which allows people to easily ascertain the location of the ones they're looking for and even compare flavor profiles from different areas of the country. Each session is an exercise in pacing, as they last several hours, and with so many outside events taking place throughout the city at bars and breweries, it's easy to overindulge and render yourself painfully useless for the rest of the trip.

As a representative for OMB, I spent a lot of time at our booth talking to people about our beers and how we make them. I love this aspect of my job. As a former teacher, I thrive on engagement, and educating people about our products and practices is one of my favorite parts of working for a brewery. We saw some familiar faces, people who live or had at one point lived in Charlotte, and we picked the brains of hundreds of other industry professionals.

When the judging was all said and done this year, both Charlotte breweries came home empty-handed. It was certainly disappointing, but with so many great beers to compete with, it was hardly surprising. Other N.C. breweries such as Wicked Weed, Mother Earth, Olde Hickory and Carolina Brewery did, however, win medals, and we're certainly proud of their accomplishments.

GABF was an amazing experience, and for those who have never been, I'd highly recommend it. The exposure that it provides for smaller breweries like those in Charlotte is invaluable, and the patrons are treated to a craft beer experience like no other. Aside from feeling completely exhausted, I came home a much better educated and experienced beer drinker and brewery representative. But most importantly, I no longer felt like that giant blue bear, standing outside and staring in through the window.

Cam Heiliger is a freelance writer, homebrewer, educator and overall craft beer geek. He works in marketing and distribution at Olde Mecklenburg Brewery, where he runs social media, gives tours of the brewery and ensures that Charlotte has the cleanest OMB beer lines around.

More Beer and Loathing in the Q.C. »

Latest in Beer and Loathing in the Q.C.