A Quiet Place: Loud and Proud | Reviews | Creative Loafing Charlotte
Switch to the mobile version of this page.

A Quiet Place: Loud and Proud 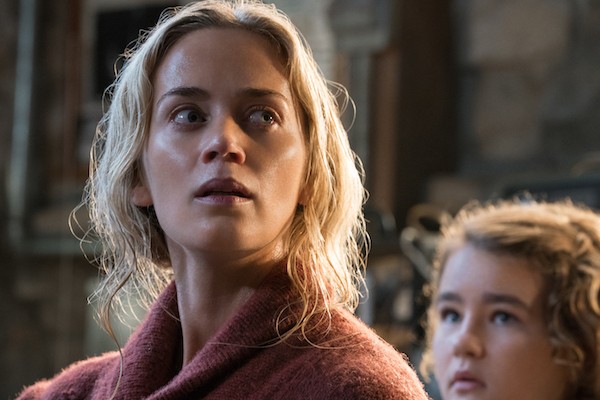 Actor John Krasinski’s previous picture in the director’s seat, 2016’s The Hollars, made minimal noise when it was selected as part of the Sundance slate, but its subsequent wide release led to dismissive reviews, scant box office, and serious flirtation with my own year-end “10 Worst” list (I ultimately determined that the likes of Alice Through the Looking Glass and London Has Fallen were slightly more foul). Conversely, Krasinski’s latest directorial at-bat, A Quiet Place, made ample noise when it debuted at South By Southwest, and its subsequent wide release confirms that the deafening buzz was more than justified. Making the most of its ingenious hook, A Quiet Place is a crackerjack horror film, and while it may not boast the sociopolitical gravitas that informed last year’s Oscar-winning Get Out, it’s nevertheless a treat for anyone who likes movies that go bump in the night.

The world of A Quiet Place has been largely decimated by monsters – fearsome beings who are blind but use their highly developed sense of sound to locate and eviscerate any living creature (not just humans but basically anything that moves and makes noise). After a tense opening sequence that ends in tragedy, the picture examines how the members of the Abbott family – dad Lee (Krasinski), mom Evelyn (Emily Blunt), daughter Regan (Millicent Simmonds) and son Marcus (Noah Jupe) – try to survive in this nightmarish landscape. The answer is obvious: Like Elmer Fudd hunting wabbits, they strive to remain vewy, vewy quiet. It’s a challenge for all concerned, and even more so for Regan. As she’s deaf, she’s unable to know when someone else has made a sound or when, heaven forbid, one of the creatures is lurking in the vicinity.

What’s noteworthy about the script by Krasinski, Bryan Woods and Scott Beck is that it establishes its setting and its premise and then rarely looks back. While ample exposition in a movie is usually a wonderful thing, here it’s only doled out in small, even subtle ways. For example, venture online and you’ll find plenty of filmgoers wondering whether these monsters are extra-terrestrials, man-made experiments gone wrong, subterranean critters from the bowels of the earth, or something else entirely. Yet a quick peek at the newspaper headlines shown early in the film hints at their origins, and it’s really all that’s required.

Krasinski and Blunt are married in real life, so it’s reassuring to note that they share a natural rapport on screen. They’re excellent, although the breakout star here is Simmonds. Deaf in real life, the young actress made her debut last year in Todd Haynes’ underwhelming Wonderstruck. She’s far more vibrant here, positioning her character as a courageous girl who finds herself battling internal as well as external demons.

A Quiet Place runs a brisk 90 minutes, and while this is that rare recent movie that could stand to be longer, the abbreviated length results in a second half that finds the characters leaping cliffhanger style from one harrowing situation to another. One plot strand involving an expectant mom comes off as a needless gilding of the lily – or, in this case, an unnecessary glutting of the story – but even here, Krasinski as director keeps the tensile screws tight.

A Quiet Place isn’t frightening as much as it’s fraught with suspense – cheap gotcha scares are kept to a bare minimum, with Krasinski preferring to build underlying dread rather than elicit audible yelps. In space, no one can hear you scream, but in an auditorium showing A Quiet Place, everyone can see you flinch.