Plus, a new drill for dinner theater and more 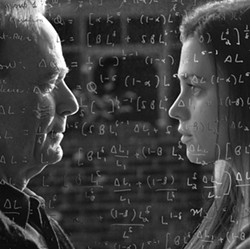 Something very special has been going on up at Exit 30, and it isn't just the Royal Shakespeare Company residency at Davidson College. For a couple of years now, the Davidson Community Players have been overachieving with such productions as I Hate Hamlet and The Spitfire Grill.

Last week's run of Proof at the Knobloch Campus Center was a bit shorter than those two shows but just as sweet. Perhaps sweeter, on second thought, because this was a unique family affair. Joe Gardner and his daughter Beth Gardner Helfrich, both of whom have won multiple Creative Loafing Theater Awards, appeared onstage together for the first time -- perfectly cast as a brilliant college professor and his talented daughter.

Actually, this was more of a stretch for Dad, whose two CL awards have been earned as a set designer. Portraying an insane mathematical genius risen from the dead, Joe looked remarkably at ease in the opening scene. If anyone looked rusty, it was Beth portraying Catherine, the troubled caretaker set to emerge from her chrysalis.

The younger Gardner has so much natural talent that occasionally she veers into slickness. That's how easy it is for her. It wasn't long, however, before David Auburn's Pulitzer Prize-winning script grabbed her, and then she grabbed us.

Her timing is even surer than her empathy. For that reason alone, this little community theater production was on par with Charlotte Rep's 2002 version. But the actress wasn't the whole show. Aside from the elder Gardner's sustained excellence, John Cunningham gave a fine performance as the student disciple of the revered mathematical genius. Over the past couple of seasons, Cunningham has shown an affinity -- in Some Girls and The Heidi Chronicles -- for goofy guys who are cute and charming one minute and detestable scumbags the next. Exactly what Hal should be here.

As for Anne Lambert, she was marvelously irritating as Catherine's humdrum sister. The static electricity between the siblings could knock you down. Director Martin Thompson had his finger on the pulse of this story from beginning to end, but I do wish he had let Professor Gardner design the set.

Pineville Dinner Theater has a new drill for 2008. They are starting their stage shows earlier and following them up with late-night standup comedy. Yes, Chef Cliff Ottinger is further refining his devastating buffet, adding a mean salmon piccatta and a Grecian-style grits that just might persuade you to bypass the alluring smoked-gouda potatoes.

Onstage, a well-coordinated quintet is raveling and unraveling the unlikely complications of Here Lies Jeremy Troy, by dinner theater bard Jack Sharkey. The pity is that these pros, notably Tim Ross and Hank West, don't seem to enjoy the same fine working conditions as the five-star kitchen staff. Protagonist Jeremy Troy, earnestly portrayed by John Bryan, must entertain his power-lawyer boss at a skimpy table flanked by folding chairs.

That was a minor distraction on Saturday night compared with the telephone that kept ringing in the entrance lobby, surely as audible onstage as it was to me. I'd be lying, however, if I said that anyone onstage ever missed a beat -- or that anyone in the audience lost a laugh. Caroline Kapo, as Jeremy's devoted and deceived wife, seems to be a dinner theater natural in her PDT debut.

Alissa Laderer has a blast with all the idiosyncrasies of Tina Winslow, an aspiring actress who specializes in lettuce soup and a Southern Toronto accent. It's fairly difficult to turn Jeremy's blowhard boss into chicken salad, but West gives it his best shot, which is pretty damn good as usual.

One of these nights, West will pick up the phone onstage and let the folks in the lobby have it. Mark my words.

Based on what I saw on stage at ImaginOn last Saturday afternoon, Stephanie S. Tolan's Surviving the Applewhites is a relaxing, apple-cider read very much in the vein of Clyde Edgerton's rusticated yarns. Children's Theatre is presenting a fine stage adaptation, by Tolan and Katherine Paterson, that could stand to be trimmed of its charming self-indulgence.

If you love artsy-craftsy, mystic, life-affirming space cadets as much as I do, you're likely to enjoy every minute. But 120 of those minutes may be too much for the ankle-biter you drag into McColl Family Theatre.

With that caution in mind, do yourself and a non-squirming child a favor and relish the wonderful crazies that Tolan has assembled at Wit's End in Traybridge, North Carolina. There are no weak links in this cast, from Stephen Friedrich as spike-haired incorrigible Jake Semple all the way down to Robert Glahn as Winston the Dog.

Even the normal member of the Applewhite clan is laughable in her anality, particularly with Nikki Adkins wielding E.D.'s clipboard. Barbi VanSchaick as best-selling mystery scribe Sybil Applewhite is every bit as egotistical as her theater director husband Randolph, delivered by Steven Ivey with detachable wig.

The lively hive of creative looniness will remind longtime theatergoers of You Can't Take It with You. Hey, there's one comedy that's longer than this!

For an excruciatingly long show, you need to catch The Wedding Singer the next time it comes to town. The first act alone droned on to nearly an hour and a half.

Now I understood why Robbie Hart's fiancée would leave him at the altar and why Robbie wouldn't want this banshee back. What I never got the hang of was what Glen, the rich guy driving the DeLorean, saw in Julia Sullivan, Robbie's love-at-first-sight soulmate. Scholars of the original Adam Sandler film can e-mail me.