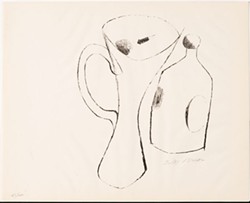 It's everything you could want in a show.

Julius Bissier: Selected Works 1956 to 1963 is an exhibit of 11 works from late in the German artist's career. The Bechtler is paying deserved homage to Bissier by showing these works, all of which capture his investigation into abstraction. Achieving intimacy in ways other shows in the museum's small second floor gallery haven't, this exhibition is tailor-made for the space. The lights are low, there are few works and the accompanying descriptive texts are comprehensive.

Two walls are lined with paintings, egg tempera on cut linen squares, and ink drawings on paper, all mounted in minimalist frames. Another wall features a key matching the artist's abstract symbols to their meanings: Shell, the Rope of Ocnus and Blooming Lotus, to name a few. The key is a reprint from an old exhibition catalogue, with symbols originally drawn by Bissier's wife.

The paintings contain tight shapes of flat color that rarely intersect and are made to look layered like collages, with forms stacked next to or atop one another. One of the strongest pieces on view is "Ascona 4.2.62" (1962), a true exploration of form in two dimensions — multiple shapes in brown, pink, purple and black float in a single plane, very solitary despite their bits of overlapping. In "6.3.56" (1956), the same effect is achieved, though with more saturated color and small, tight forms. The swath of eggplant in "Ronco, 25 April 59 Mi" (1959) is contained within straight lines, but Bissier's color application is so perfectly organic that his gesture is still apparent.

The drawings in the show are less remarkable, but gestural work like the black ink on paper piece "3.3.58" (1958) will help patrons understand Bissier's devotion to remnants of the human presence, sometimes emerging in the paintings. While the Abstract Expressionists, his American contemporaries, were embracing action painting, Bissier was employing his own version in Europe, though his gestures came from a place of zen rather than raw human emotion.

Bissier was born in Germany in 1893 and experienced a provincial childhood and adolescence. After realizing academia was not for him, he began painting as a realist for a while but, throughout his life, defining experiences like relationships with Ernest Grosse and Constantin Brâncusi and a damaging studio fire guided him toward creating the work on view.

Grosse, a Sinologist (specialist in Chinese culture), became a mentor to Bissier and introduced him to Eastern spirituality and art. According to the museum text, Bissier said that Grosse taught him "to open my eyes, in that he taught me to close them ... the power of intuitive understanding, the imaginative faculty as the basis of creative contemplation. Submersion in the essence of things beyond their momentary appearance — this was his spirited teaching."

A 1930 encounter with Brâncusi convinced Bissier of the transcendent possibilities of abstraction, and for the rest of his career he strove to create visual renderings of his own meditative mental state. This is why his forms remain organic and why he renders ideas in symbols.

From 1929-1930, Bissier taught at Frieburg University, and when a large fire there destroyed most of the work he had ever made, he was forced to start from scratch. This, combined with the death of his son and a general pressure on Modern artists by the Nazi regime, meant he rarely exhibited until after the war. However, the more he focused on translating his inner meditative state, the more respect he received from the international arts community.

Bissier gained fame in this style and, in his later years, his work was included in prestigious modern art exhibitions such as Germany's documenta II in 1959 and the Venice Biennale in 1960.

In 1961, Bissier moved to Ascona, Switzerland, where he met Hans and Bessie Bechtler at their summer home. As everyone knows, the Bechtlers were great patrons of fine artists, and Bissier clearly fell into this category. Though the museum has already shown some of his works on view in the recent past, they have never looked better than they do here. This small collection illuminates the brightest part of a good artist's career.