Global cuisine with a flourish 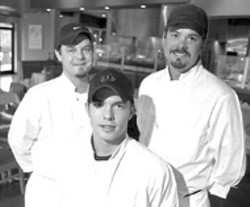 The picture of Norah Jones in a simple black dress holding an armful of Grammys struck me: Here was a simply dressed young woman gathering awards for singing and playing the piano. No gimmicks. No decolletage. No flash. Five Grammys.To me, food is not about glitz, either. I'll leave the visual aspects of food to stylists who pose food for a living. Food is about taste and smell. Textures may also play a part, although "mouth feel" is more important to advertisers and food marketers than food writers. How a chef seduces the senses of taste and smell is the measure of the chef. Easy to say, not so easy to do.

My first experience with Chef Dan Stahlman's food was a few years back when I reviewed Mojo Restaurant & Spirits, which he co-owns with Ted Cannon. Mojo looked like a bar, but had exceptional food. Last November Stahlman, Cannon, and new partner Angela Pitre opened Nectar just around the corner from Mojo's.

Stahlman, who graduated from Johnson & Wales University, Charleston, in 1993, was born to missionary parents who were stationed in Papua, New Guinea. He has lived and traveled throughout the world and literally brings much of this experience to the table. His partner Cannon is a graduate of the CPCC culinary program. Together they ran the concessions at Blockbuster Pavilion for a few years. Today, in addition to Nectar and Mojo, they own Make It Happen Everyday Catering. With the opening of Nectar, Stahlman has "scaled down" the menu at Mojo's to "standard bar fare."

At night, 100-seat Nectar's is lively though the interior hasn't changed dramatically since it was Cabana Jack's. Underfoot is still the rustic, stained concrete floor. The palm trees, patio fountain, and jelly chairs were ditched; however, the wobbly, slated wood booth benches remain. New paintings and crisp tablecloths give an upscale feel. The patio, which overlooks Runnymede (nee Woodlawn), seats an additional 50 diners. The kitchen is open. "That's an adjustment for me," says Stahlman. "I had never worked in an open kitchen before."

The menu is globally diverse: prawn fitters with Thai cucumber salad, four cheese poblano chiles rellenos, filet mignon with horseradish gratin potatoes, and grilled chicken penne with pancetta. Fish entrees are not printed on the menu since Stahlman prefers to buy fish daily and use them as specials.

The appetizers were particularly appealing. Crabmeat teamed with shrimp in superbly realized cakes accompanied by a triad of drizzled sauces. Spring rolls of chicken and shrimp braced with delicate glass noodles and then precisely fried were quickly consumed after being dunked in a heady soy ginger sauce. Caesar Salad with its deep fried croutons, on the other hand, was entirely too garlicky: the flavor of the romaine was completely masked. Desserts brought a high kick to the evening. The chocolate cheesecake erupts with various chocolate formats having confessed its intentions on the menu.

Ten years ago, with thousands of culinary-school trained chefs spreading their talents across the US, a couple of things happened. In some restaurants, entree dishes became three-dimensional shimmering towers. Or entrees were highly energized with multiple components. Everything in the kitchen was on your plate and in your face.

With his entrees, Stahlman hedged a few bets. Teetering architecture plays a role. But forget the shrimp towers delivered to the next table, or the protruding crispy rice noodles in my pork tenderloin entree. Beyond that, the plates were crowded, in all senses. For starters, the kitchen uses paprika around the rim of the plates -- all the plates. Paprika has its own scent and I found that not only was it in conflict with the entrees I tasted, but the aroma overpowered other scents. The entrees reminded me of a beautiful woman out on the town wearing too much makeup and too much perfume. Some restaurants try to make dishes look good because they can't make them taste good. But this is not true in Nectar's kitchen. The food in its individual components succeeds, overall. Wild mushroom risotto can be a soothing winter dish where freshly foraged mushrooms are the stars, but add a heaping portion of shaved parmesan cheese, artichokes, asparagus, roasted red peppers, and then rim the dish with paprika and the dish is on serious sensory overload.

Stahlman expressed excitement at finally having the "correct venue" to showcase his food. At Mojo's I was pleasantly surprised. At Nectar while some of the dishes can knock your socks off, others were too gussied up for their own good. The talent is there. Hopefully, Stahlman will relax and let the food speak for itself and by doing that will allow his natural culinary talent to shine through.

The Eighth Taste of the Nation will be held Tuesday, April 8, in the Wachovia Atrium. Through an all-volunteer staff, Charlotte Taste of the Nation is able to contribute 100 percent of the funds raised through ticket sales to Second Harvest Food Bank of Metrolina, Community Food Rescue, and NC Justice and Community Development Center. Thirty-six local restaurants will be participating in this year's events. Charlotte's event is being sponsored locally by US Foodservice and local businesses. Tickets are $45 if purchased before March 31, $50 after that date or at the door, $75 for a preview ticket. Call 704-376-1785 for tickets or visit the website: www.CharlotteTasteoftheNation.org.

Do you have a restaurant tip, compliment, complaint? Do you know of a restaurant that has opened, closed, or should be reviewed? Does your restaurant or shop have news, menu changes, new additions to staff or building, upcoming cuisine or wine events? You can fax this information, at least 12 days in advance of event date, to Eaters' Digest: 704-944-3605, or leave voice mail: 704-522-8334, ext. 136.