George Clinton knows how to free minds so their asses follow 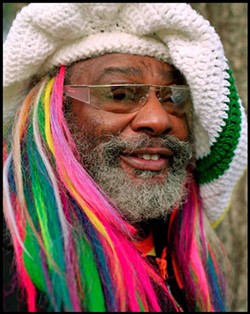 George Clinton, groovemeister extraordinaire, inventor of alterna-funk and one of America's musical greats is from Kannapolis, N.C. Prolific architect of booty shaking funk like "Atomic Dog" and earlier gems like "Maggot Brain" and "One Nation Under a Groove," his longevity and relevance is still going strong after 50 years in music. Few music veterans maintain their cool this long as his comfort zone from doo-wop to hip hop and points in between -- like acid-rock to primal funk -- help explain his stature.

His recent successful court battles where he regained title to much of his original material explain the recent surge of activity of recording, touring and even leading the University of Southern California marching band during half-time, celebrating his 50 years in music.

Speaking with him by phone recently, prior to a recording session, gave me the chance to inquire about his Carolina connection. Hoping for interesting tales about time spent in Kannapolis was, unfortunately, a dead end. "Nope, don't remember anything. Have no memories at all," he said, "But I'm learning about it. I know about Cannon Towels. I got a chance to go back there. They celebrate my birthday there." Explaining further, he said, "I left when I was 1-years old, moved to Virginia -- Chase City, Virginia -- and by 9, I was in Newark, New Jersey." It was in Newark where he was a fan of Frankie Lyman and the Teenagers and eventually, after settling in Detroit, teamed up with his earlier Jersey barbershop friends to record the doo-wopish "I Just Wanna Testify," which was his first hit in 1967.

Through the years, George went from cult hero to a larger iconic legend bearer, along the way creating legendary three-hour performances with whacked out stage antics, large productions featuring the Mothership and creating his own vocabulary, like his Placebo Theory of jivation through logic and it's purveyor Sir Nose D'Voidoffunk, who won't swim, sweat or dance.

In the '70s, his wacky originality was such that he led two powerful bands, The Parliaments (later Parliament) and Funkedelic with each signed to two different labels, though both possessed the same musicians. Eventually, he united them as Parliament Funkedelic or P-Funk. With both combined, he created psychedelic-funk extravaganzas, often with up to 30 musicians wandering around onstage in bizarre costumes.

By the '80's he welcomed hip-hop nation lending his tunes and beats for sampling and also teaming up with Prince. "Atomic Dog" solidified his legendary status and with his newly founded label he expects his soul groove to continue. His new label is The C Kunspyruhzy (conspiracy), which according to George, "That's the three c's; communism, crips and crack".

His most recent recording, the first in 10 years and a double CD, How Late Do U Have 2BB4UR Absent? features the usual regulars, like Bernie Worrell, some all-stars Like Bobby Womack and Prince plus according to George, "My son's on it, he's Tres Lewd, and my granddaughter Sativa. She raps 'Something Stank.'" George adds that on his new label the featured artists on the album, "Are all releasing their own related CDs."

George adds, "I have a techno doo-wop album coming out soon. It's called Won't Take No For An Answer; Doo Wop, Be Bop to Hip Hop." His current album features chestnuts like "Goodnight Sweetheart Goodnight," the 1954 Spaniels doo wop hit, and this new version updates it with synths and breakbeats.

In the Rock Hall of Fame since 1997, both Spin and Rolling Stone claim P-Funk as one of the best live acts of all time. "In Charlotte," says George, "We'll have 25 or 28 people on stage." Though the Mothership may no longer be present, Clinton always adds spectacle, showmanship and humor to his monumental groove. Raspy voiced George knowingly presides over this near free-form mayhem with his credit, tellingly stating: lead vocals, referee.

Some say George is the link between James Brown and Prince while others say he's a cross between Sun Ra and The Grateful Dead. An earlier quote from George says, "Anything that parents don't like, that's the music I like." But the caped crusader is best summed up by his line (and album title), "Free your mind and your ass will follow."

George Clinton and Parliament/Funkadelic will perform on May 20 at the Neighborhood Theatre. Tickets are $35. Doors at 7; show at 8 p.m.