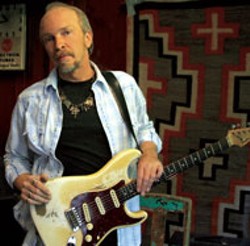 Dave Alvin really doesn't give a damn what they call his music. The way he sees it, he's just been upholding a long-standing tradition, first as a member of the punkabilly happy Blasters, and then as a solo artist over the two decades since their demise."I consider myself basically a blues guy because I'm just writing my blues," Alvin says by phone from his home in Southern California. "But if I want to write a country song, fine, I don't want to be judged. Or if I want to write a song that sounds like a 19th century folk song, fine, just write the damn song, and labels be damned. And the Americana thing allows you a bit of that freedom, so I don't mind that term because it's a pretty wide net, and it goes from one generational end to the other."

Alvin concedes that "alt.country" certainly didn't hurt his career, and may have even introduced a few more people to his music. But for him, like so many others including its alleged 90s' founders, alternative country "probably started with the Byrds." But being pigeonholed doesn't interest Alvin.

"For me, it's a little problematic, because I'm a songwriter, and songwriters have to keep their ears open to every possibility," he says.

And a tour through his recorded past reveals a near compendium of American musical history. Influenced both by the Bakersfield country swing sound and the rhythm & blues of personal mentors like Lee Allen and T-Bone Walker, the Blasters' hybrid also included a healthy dose of X-like punk -- not all that surprising since they shared so many dates in the early 80s. When Alvin left his brother Phil and the other members of the Blasters to pursue his solo career (and after a brief stint in X), he was free to incorporate any song styles he wanted.

"I found that if I felt like writing a polka that morning, I could," he says. "I didn't have to think, "oh, the band won't play it.' Because I threw away a lot of songs that I wrote during the Blasters' era that were probably good songs."

Thankfully, Alvin rebounded, putting out a string of solo records that, while never wildly successful, earned him a diehard following and critical acclaim. He wasn't exactly prolific, but it wasn't for lack of talent. For Alvin, the records have been means to one end -- touring.

"For me, everything is playing live, I mean everything," he says, though the thrill of an itinerant lifestyle is not the draw. "The glamour part of truckstops and gas stations and motel rooms and fast food -- I got over that years ago, but it's still the live gig, so you put up with this other jazz."

He cautions that he's not complaining -- "it's weird, but not rough, because digging a ditch is rough" -- but concedes that life on the road can be wearing.

"What happens to a lot of people who live on the road, whether they're musicians or traveling salesman or whatever, you start to notice that time is different," he says. "You start feeling alienated in some ways, and dislocated."

So Alvin has tried to cut back on the touring in the last year or so. His father succumbed recently after a long illness, and Alvin retreated, in some respects, to take stock. His previous studio recording, 2000's Grammy-winning collection of folk songs, Public Domain, helped him come to grips with his father's illness; his latest, and his first for Yep Roc, Ashgrove, was a means of dealing with his father's passing.

"The death of anyone can lead you into dark places."

On the other hand, the years after his father died have also been a time of renewal and reaffirmation. Coinciding with Rhino's reissue of the entire Blasters' out-of-print Warner Brothers' catalogue, Dave and his brother Phil put aside their differences long enough to put together a brief West coast reunion tour with all of the original band members. To their surprise, the shows were so warmly received that the group decided to add more dates across the country. While he admits to being "stunned" at the positive reaction from fans, there was something even more surprising to Alvin: the quality of music from the reformed Blasters.