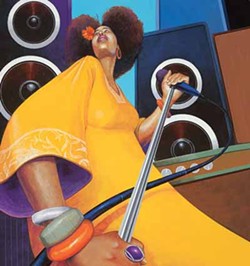 Drawing a crowd of more than 1,600, the urban art exhibition Art, Beats + Lyrics made one hell of a splash when it debuted at CenterStage@NoDa last April. The one-night event -- which was designed to celebrate hip-hop culture through visual and performance art -- packed a multitude of paintings, photographs, dancers, DJs, vocalists and more into the 10,000-square-foot venue and, seemingly, dazzled everyone in attendance.

And then, poof, it was gone.

Of course, that was always the plan. A,B+L was created to be a nomadic happening (the very first one took place in 2004 in Atlanta), and throughout 2008, the show thrilled audiences in St. Louis; Jackson, Miss.; and Baltimore, among several other cities, with the same eye and ear candy that was on display in the Queen City.

"Each city has been a great surprise," says A,B+L founder and co-producer Jabari Graham. "People had fun in Jackson. In St. Louis, it was cold, it was raining but people still came out. In Baltimore, we pulled in people from D.C. and even New York. It's been a good tour."

"Over the last year, I've learned that there are people just like you all over the country looking for an opportunity to get their work showcased in front of an audience," says the illustrator -- and A,B+L co-producer -- known simply as Dubelyoo. "But the biggest lesson I've learned from taking the show on the road is that the only way you can pull something off like this is with the help of really good people and people that are really flexible and people that are pretty smart because moving a show as big as this is from one city to the next is a task within itself."

Indeed, taking A,B+L -- which is produced through a partnership with Gentleman Jack -- on the road was part of the event's grand scheme ... and a return to our fair city was also on tap from jump.

So, come Fri., May 8, expect to see the crew behind the first Charlotte joint in the house once again -- but don't expect to see the same A,B+L. According to Graham and Dubelyoo, the event has changed a lot since last time they were in town.

First off, one big change for the latest edition of A,B+L is the location. Last year, as previously stated, all the fun took place at CenterStage, but this year it's all going down at The Blake Hotel. (As a result, you probably won't have to worry about getting towed because you parked in front of someone's driveway.)

Secondly, remember all those paintings and photographs I mentioned a few paragraphs ago? Well, you won't be seeing any of them this go 'round.

"All the art pieces are switched up," Graham says. "None of the art is the same as last year."

"We've got bigger art. We've got a bigger variety of [artists]. We have a lot more [graffiti] work in the show and a lot more paintings, as you might suspect," adds Dubelyoo.

Among the crop of artists showing new works in this year's event, keep your eyes peeled for out-of-towners such as Tindel, Michi, Mad Clout, Gilbert Young and Charlotte residents like the God City art collective, photographer Jasiatic (who sometimes snaps pics for Creative Loafing) and more.

On top of that, this year, if you really dig some of the art, you may be able to take it home with you.

"There will be things for sale. There'll be things you can take home that are pretty affordable, so you can start your art collection," says Dubelyoo. "Actually, this is a really good time to start an art collection. With the economy the way it is, a lot of the artists' prices have gone down. And with this type of show, you're dealing more with the price the artists set instead of what a gallery sets."

Besides the new art and the new venue, A,B+L is also serving up new musical performances for the 2009 edition. Atlanta-based DJ Rasta Root will be back; he's joined by acclaimed wax spinners like DJ Jamad (the dude behind the Afromentals CD series), Applejac and Princess Cut. And the live Afro-beat band that rocked the house last year, The Common Ground Collective, is back, but that crew will be sharing the stage with the funky jazz-centric group Jaspects -- and more surprise singers, musicians and rappers are sure to pop out at any given moment.

Now, with all these sweeping changes to a program that was pretty damn successful in the first place, one has to ask: "If it ain't broke, why fix it?"

"We're trying to enhance the whole experience," says Dubelyoo. "We've pumped up the entertainment value. We've pumped up the art. Charlotte last year was, like, our first go around, so now we've had a chance to fine-tune a lot of things, polish a lot more parts of the show."

Once the dust settles in the Queen City, what's next for A,B+L? The show -- surprise, surprise -- gets back on the road. "We've got Atlanta in July," says Graham.

Art, Beats + Lyrics hits The Blake Hotel (555 S. McDowell St.) Fri., May 8, from 7 p.m. to midnight. Admission is free, but registration is required at www.jackdaniels.com/abl.