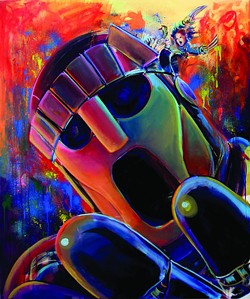 Listening to John Hairston Jr. reminisce about the first time he was introduced to art and illustration, you can hear in his voice that this is his life's work.

The North Carolina native fondly remembers his elementary school field trip to the Mint Museum where an exhibit called That's All Folks!, featuring animation cells and original drawings of Looney Tunes characters, sparked a lifelong passion for the arts.

He grew up watching his grandfather paint but he only decided to pick up a brush 10 years ago. Before that, like most kids that age, he was drawing. Fascinated by Mad Magazine, he hit the book-fair circuit for more publications about drawing. He worked tirelessly to try and mimic famed comic book artist Jim Lee, but he soon realized there were other ways.

"I'm over here breaking my hands trying to do that, and it's like you don't have to be like that, you can do your own thing," says Hairston.

It was a DC Comics imprint, Milestone Media, which really influenced Hairston. The comic book publishing group was only in existence from 1993-1997, but it featured African-American heroes like Static. "They were all very unique, and their style was kinda like hip-hop — it was kinda like graffiti-style superheroes," Hairston says. "I was like, 'You know what? I can apply this to my style. I don't have to be like these other guys, I can be myself and be comfortable with it.' And from there it just went on."

Surrounded by action figures with paint all over the place, stacks of graphic novels and comics, and '90s hip-hop setting the tone, Hairston creates work that's part watercolor, part graffiti and part comic, inspired by a childhood obsession with The X-Men, Spider-Man and Punisher, and people in his life who's own journey parallels those of the famed Marvel characters.

The metal-skinned X-Man Colossus, was a recurring figure in his paintings. "Whenever I think about inner strength, whenever I think about perseverance I think about someone with a rock-hard hat or iron-steel skin, that's impenetrable," he says. "Yeah, they can be hurt emotionally but physically there's nothing tougher than living steel."

Mirroring the close relationship between him and his sister, he pointed out how Colossus sacrificed his life to cure his sister — and all mutants — of disease (although the character was eventually resurrected), and likened that to the lengths he'd go to defend the people close to him in real life.

From that one character, he started to paint a team, much like The X-Men, but based on the people and personalities in his life.

There's his cousins' son, Justin, who Hairston describes as "always there one second, then he's gone." Sounds a lot like the Nightcrawler, so when he painted him, he naturally had Nightcrawler's teleportation powers. There's his girlfriend, who's tough outer exterior but immense loyalty reminded him of Wolverine.

His new show, Children of the Atom, has been three years in the making.

Taking the name from an old X-men-related Sega Saturn game and beginning simply with painting a kid with metal skin, it's been an ongoing process towards creating these works.

"I always try to use encoding in my art to really tell my whole life story without saying too much," says Hairston. "It's always encrypted in like robots, and monsters and females and quirky titles. So this is me furthering what I've been doing forever."

Hairston hopes to prove that Charlotte artists can be more than one thing. "It's something different that just landscapes and portraits of old barns ... this is something different all together, I'm a representation of the modern artist in Charlotte, just like everybody else," he says. "This is my labor of love and that's what it is."