Intriguing exhibit knocks down borders ... ours

"This work's not intended to be political yet the very outline of the shape we know as the USA takes on a stance that resonates beyond the visual. It resonates in the arena of power, history, geography, economics and politics ..." That's what Randy Shull writes in his artist's statement about his new exhibit, Channeling the USA, now on display at the McColl Center for Visual Art.

Maybe he should have called it the arena of fun-loving wickedness, rough slickness and head-spinning grandiosity. That's the American arena I see in the exhibit. Shull has made the United States' universally recognized and geographically mundane national borderline his own playground, and he seems to have had a grand time with it.

A North Carolina artist who maintains a studio in Asheville and also serves on the board of the Asheville Art Museum, Shull has a ying/yang, positive/negative, void and substance thing going on here. Half of his American geographical outlines are empty, the other half filled. The positive, filled-in images all say something about our country, the territory Shull calls home. And the voids? Maybe we're supposed to fill those in with our own imaginings. Or perhaps we come to the exhibit having already filled the space with our own convictions, romantic visions and biases, and we're here to have those visions challenged. Perhaps our national envelope is vacant — perhaps there's no there there.

For the piece "Diver with Shoes," Shull painted directly on a section of the gallery wall about the size of a minivan. He smeared, rolled and brushed the wall with stop-sign red paint, the color used in '50s B movies to illustrate boundless blood. A heaping helping on the right side is blotched with overflow red, enough to cascade dribbles to the gallery floor. He attached a plywood cutout of our country to the wall, implanting the bottom half of a man into the center of the territorial outline. The man's feet are splayed; a drywall screw driven through his nether region fixes what's left of him to the plywood. His top half is gone. He's painted tar black — shoe soles to beltline — and red paint drips from the hole he made going in. (I could swear his legs were still wriggling an instant before I walked up.) He seems to have dived headfirst into America's breadbasket, stoked and giddy, and now he's been reduced by half. Horatio Alger 2012.

A crate the size of a thick plasma TV rotates on a low pedestal. This piece is called "Box 15." The crate's center is a cutout void of the USA; the crate is see-through. A man's bottom half — codpiece to flip flops — projects from one end of the crate and hands project from the other. The legs rotate beyond the sides of the pedestal; it's best to stand clear to avoid getting kicked. Two concrete blocks are stacked atop one end as a counterweight to the cantilevered legs. "Box 15" is stenciled with the dimensions H37 L45 W19, and the word BONSAI is printed below the empty outline of the USA, south of the Rio Grande.

The crate is a coffin. The heart of the coffin is a void: America. A hollow man pokes out of both ends; he's either dead or the subject of a parlor trick. The man is crated for travel, packaged to be shipped and sold elsewhere. The package he travels in is well made, sturdy and modestly attractive — well above average for a crate. A pretty package wrapping a dubious bill of goods.

This piece, like some of the other works in Shull's Channeling the USA, shows great care in craftsmanship. Particularly in the three-dimensional pieces, Shull shows off a precise and talented hand and genuine care for and appreciation of his materials. And he's having fun.

In "Poetic Fix 2012," Shull has wrapped the familiar void, from center to edge, in silver duct tape. The void and her periphery resemble one of those custom-fit, vacuum-sucked Styrofoam packaging inserts designed to protect cargo, but the only cargo is the gallery wall behind the piece. Empty space, a shadow, dust motes. The stretched duct tape is puckered like old lips taking a drag off a cigarette. Dried up and wrinkly. The image is taut, compressed and bound-up — packed with tension. It's a spectacular presentation made from a common material full of emptiness, as alarming, tonic and baffling as a middle-school production of Hamlet. Wrapped in soundless fervor and hollow at its core. 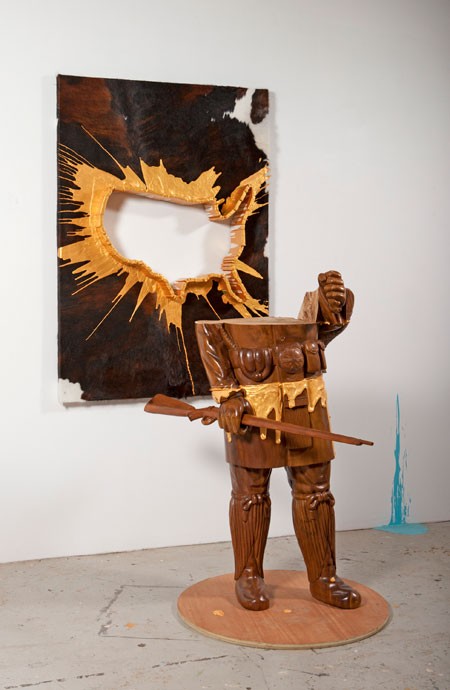 For the piece called "......he was a big man," a carved slab of brown, black and white cowhide the size of a Sub-Zero is wrapped on a canvas stretcher. Wood battens outline the territorial void and jut out 8 inches toward the viewer. The battens are painted bright yellow gold — that tinny gold you find wrapped around crappy chocolates. The gold bursts from the outline with the force of a paint balloon hitting the sidewalk from a rooftop. A fat frontiersman carved from wood stands in front of the rawhide. The man holds a rifle in his toaster-sized hand. Gold paint drips off his stout midsection. He's sanded and polished and shiny from the soles of his size-16 moccasins to his sternum, where he's been severed by a chain saw. An American half-man symbolizing his home land: He's brazen and callow, massive, strong, tinselly and tacky.

Shull likes spin art; I like spin art. At least two pieces here — "Simultaneous Pattern" (black on white spin) and "Blurred Interpretation" (blue and white on battleship gray spin) — boast the tinny and riveting explosiveness of carnival spin art. The empty USA borderline is at the center of each paint burst. I look at these pieces and recall the magical combination of paint and centrifugal force I saw at carnivals in my childhood.

America is at the center of Shull's spin; your land and my land. Our borderline is the core force radiating the spectacular aura of explosive spatters. It's like biting into a big, creamy, beautiful chocolate truffle and finding a cotton candy core. And we keep eating.