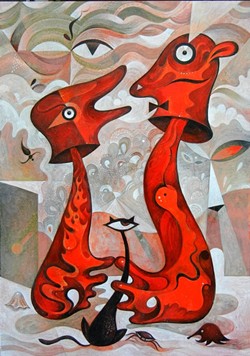 When: Oct. 7-31 2011
Local surreal artist Scott Partridge tries to keep track of his works, but over the years, certain pieces have disappeared. In his musings over where they might have ended up, Partridge came up with the idea for his latest show, Lost x Found. The exhibit at Espada Bicycles features past-time art by Partridge, recreated (and tweaked) from photos of past pieces. A new massive painting with folks from Partridge's Facebook page will also be on display. Take it from someone who's already seen it, it's pretty darn impressive.
— Anita Overcash