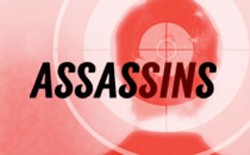 When: Thursdays-Saturdays, 8 p.m. Continues through July 13 2013
Phone: 704-455-8542
Price: $28 adult; $22 senior (60+); $18 student.
CAST presents ASSASSINS, one of Stephen Sondheim’s most interesting and memorable musicals, winner of the Tony Award and Drama Desk Award for Best Revival of a Musical. ASSASSINS opens in a fairground shooting gallery where, amid flashing lights, a collection of misfits is gathered. The proprietor of the game entices the crowd to play, promising that all their problems will be solved by killing a President. Among the infamous crowd is the who’s who of assassins and would-be assassins including John Hinckley Jr., Squeaky Fromme, Sara Jane Moore, John Wilkes Booth and Lee Harvey Oswald!