At Any Price: A matinee at most | Reviews | Creative Loafing Charlotte
Switch to the mobile version of this page.

At Any Price: A matinee at most 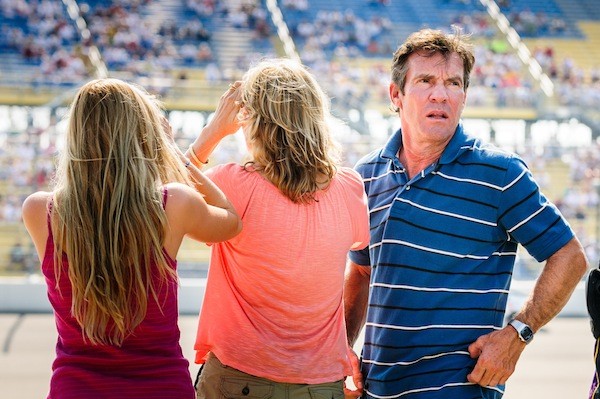 A Winston-Salem native, writer-director Ramin Bahrani has already helmed a series of award-winning indie flicks, including 2009's wonderful Goodbye Solo. Unlike these earlier efforts, At Any Price finds the filmmaker working with a name cast and a larger budget, but it's hardly an example of an indie talent going Hollywood — after all, it's not like he's directing a Transformers sequel or a superhero flick. Yet elements of sloppy scriptwriting — the types of dramatic shortcuts we often associate with multiplex fillers — do make their way into the picture, and they serve to weaken a work that otherwise can feel as earthy as its Iowa farmland setting.

In his finest performance in over a decade, Dennis Quaid plays Henry Whipple, a farmer who's doing whatever it takes to hold onto the land that's been in his family for generations. With his father (Goodbye Solo co-star Red West) constantly accusing him of destroying the legacy that was left to him, Henry hopes that one of his own sons will agree to take over the agriculture business. With the oldest boy off climbing mountains in Argentina, the duty falls on Dean (Zac Efron), but he clearly isn't interested in helping out a father he detests; besides, he'd rather be making out with his girlfriend Cadence (Maika Monroe) and racing cars in hopes of working his way up to a lucrative NASCAR career. Henry's problems don't end with his son: His wife Irene (Kim Dickens) knows he's having an affair with the local floozy (Heather Graham), he's being crushed in the region by a fellow seed salesman (the always welcome Clancy Brown), and a potentially illegal action regarding his seed distribution results in a pair of company agents sniffing around.

With his potent performance, Quaid manages to earn audience sympathy for his often unlikable character, never more than in a scene in which he tries to explain to his dad the differences between the farming business now and decades ago. Efron gives his role his best shot, but the actor's a little too soft around the edges for this part — a kid like the one who played Neckbone (Jacob Lofland) in the current indie hit Mud would have been much more believable — and the result is that Dean comes off less as an understandably angry rebel than as a petulant brat who needs to be put into time-out. But the problems with Dean are created by Bahrani as much as by Efron: While the situations surrounding Quaid's Henry Whipple remain interesting — his scenes with Brown's jovial salesman and with Monroe's sensitive teenager are among the film's best — the plot points focusing on Dean veer drastically off course, starting with the ludicrous reason he balks on his racing career and ending with a third-act twist that feels more like a screenwriter's last-second Hail Mary pass than a natural progression of events. With Bahrani's assured direction squaring off against his ragged script, this proves to be a mixed bag of a movie, maybe worth seeing for reduced admission but not necessarily at any price.