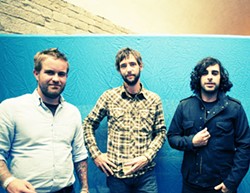 The Pacific Northwest's Blue Mountains are an appropriately impressive backdrop to catch up with Band of Horses' front man and songwriter, Ben Bridwell. After all, the Horses' critically acclaimed debut, Everything All the Time, seems custom-built for the Northwest's majestic scenery, boasting epic rock songs steeped in mile-high reverb.

But for all its transcendent moments, Everything is firmly tethered to earth by an undercurrent of rustic Southern roots. Listen closely and you can hear Bridwell's Irmo, SC, upbringing informing the songs as much as the Seattle home of Band of Horses, who play Tremont Friday night with Sub Pop labelmate Chad VanGaalen.

"There's definitely a regional kinship between the Southeast and Northwest," Bridwell says by cell on his way to a gig in Boise, ID. "They're both inspiring in their own ways, and I certainly tapped into my Southern past quite a bit when writing these songs."

In Irmo, just outside Columbia, Bridwell grew up in a neighborhood where kids "never had to worry about getting murdered," and the boat parties on Lake Murray were usually more popular than school. Bridwell was exposed to country music but weaned on early and mid-90s left-of-the-dial rock, and drawn to songs contrasting fragility and strength. Pavement and Archers of Loaf were influences, he says, but Band of Horses leans more heavily on soft/loud tension -- like Crazy Horse covering Nirvana and recording it in My Morning Jacket's grain silo.

Bridwell remained in Irmo until wanderlust struck at age 16. No longer interested in school, he dropped out and headed west to Arizona to live with his mother. Shortly after, he moved to the Northwest and landed behind the drum kit for a decade-long run with Seattle favorites Carissa's Wierd (sic), a subtle chamber-pop outfit.

The regional blend of influences emerged when Bridwell sat down to write his songs. On Everything, the acoustic ballads "Part One" and "St. Augustine" (co-written by band mate Mat Brooke, who has since left the band) sound sculpted from Southern clay, kin to Iron & Wine's timeless vignettes. At the other end of the sonic spectrum, "The First Song" opens with shimmering glissandos of reverb guitar, sounding like a waterfall of electric harps. "Wicked Gil" and "Weed Party" are arena-rock anthems for the nightclub set: up-tempo minor-key rockers recalling the multi-guitar onslaught of fellow Northwesterners Built to Spill.

The disc's most memorable songs combine both elements. "The Funeral" opens with delicate finger-picked lines and Bridwell's ethereal voice -- at the one-minute mark, the song detonates into an epic guitar-and-cymbal-crash melee, and Bridwell sounds like he's miked in an echo chamber. "The Great Salt Lake" inverts the formula, diving in with layers of thick guitar chords and summer-thunder percussion before easing off in front of each chorus. "Monsters" begins as a leisurely paced reel, with just banjo, tambourine and slide guitar accompanying Bridwell, until the drums and a slew of guitar tracks push the pace forward into one of those rousing crescendos that made you love rock & roll in the first place.

That the 28-year-old Bridwell is writing songs at all -- let alone ones this captivating -- is nearly as unlikely as the across-the-board acclaim the band has received. From Entertainment Weekly and NPR to No Depression and the tough-to-please crowd at Pitchfork, the critics have offered their hosannas. If it leaves Bridwell dumbstruck, you can't blame him: Two years ago, he and Brooke were at loose ends wondering what to do after the demise of Carissa's. At the time, Bridwell had never written a song or considered being a front man.

"There was nothing else to do, really," he sheepishly says now. "I did it out of desperation more than anything."

Desperate times bred desperate songs. In addition to all the reverb, Everything is awash in minor-key melancholy that speaks to hard times thoroughly lived in.

"['The Great Salt Lake'] isn't about the Great Salt Lake at all, it's about Lake Murray," Bridwell laughs. "A lot of the imagery is about South Carolina, combined with some incidents we heard about from some hilarious fuck-ups we knew from Salt Lake City."

An early version of "The Great Salt Lake" was among a set of lo-fi demos that made the rounds in Seattle, earning Bridwell some solo gigs before his Southern roots paid dividends again. A few years earlier, back in Irmo for Christmas vacation, Bridwell met a musician friend of his older brother Michael, another South Carolina native named Sam Beam. Beam had some music he'd recorded on four-track and gave the younger Bridwell copies to take back to Seattle. Bridwell passed them around, and they eventually landed at Sub Pop, who signed Beam straightaway under his nom de plume, Iron & Wine. Fast forward to early 2005: Beam returns the favor and takes the newly-minted Band of Horses on tour with him. After some early jitters, Bridwell proves to be a natural front man with roof-raising pipes. And the Horses generate enough buzz to become label mates with Beam at Sub Pop.

Once signed, Bridwell and Brooke could actually afford a producer and studio time (their demos were made in their practice space). They chose Phil Ek for their debut, whose lengthy resume includes gems from Built to Spill, the Shins and Modest Mouse. Getting Ek on board was fairly straightforward -- one of the perks of a tight-knit Seattle music scene.

"We're lucky to have him in our peer group to just casually ask him if we could work together instead of going through managers and labels and that kind of shit," Bridwell says. "We knew we wanted something big sounding, but Phil made sure it sounded epic -- that's one of the things he's good at."

From the sound of it, so is Bridwell.