If DJ Odi and other EDM vets have anything to do with it, the answer is yes. 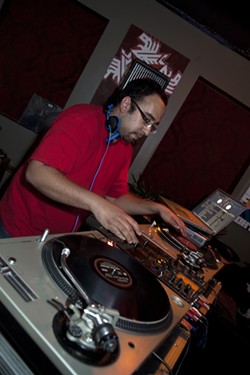 DJ Odi stands behind the turntables at Crown Station Pub in Elizabeth, scratching and mixing, pumping out 175 beats per minute of drum-and-bass, the skittering subgenre of electronic dance music that peaked in popularity during the mid-1990s.

Odi is working the crowd of 150 people hard on this crisp February night, until a couple of overzealous patrons bump into the DJ table. The music halts. "Everyone needs to take a step back," Odi yells, then kicks back in, trying to re-find his rhythm. The momentary lapse generates as much excitement in the crowd as it does frustration. And it is that uneasy dissonance that creates mad frenzies on dance floors the world over.

When Carlos "Odi" Castillo relocated to Charlotte from New York City in January, the pioneering drum-and-bass DJ knew that he was moving into a flourishing EDM scene. "Charlotte is one of the most powerful major-micro markets," he says.

It's the day before his Crown Station gig, and Castillo is having a pint at Jack Beagle's in NoDa. His calm tone mirrors the Southern culture he's had to adapt to since he moved here, although his Mets jersey reveals a still-strong tie to his home state. "There are four colleges within 20 minutes of Charlotte," he continues. "That's an incubator for music." What's more, he adds, Charlotte "is diverse, culturally."

That diversity may be one of the key reasons the EDM scene in this area has exploded so much over the past two years and is now reaching a fever pitch. It wasn't always like that. In the early '90s, the electronic dance scene in Charlotte revolved around one club: Mythos. Artists ranging from Sasha and Digweed to Little Louie Vega, Grandmaster Flash, Doc Martin and Jellybean Benitez all came to town thanks to the efforts of one guy, Andy Kastanas, who has been DJing locally since 1980.

Over the years, clubs changed names, changed styles, and found new audiences and new niches. The idea of one club serving all dance-music fans faded. Two decades later, EDM has expanded into a variety of venues, from traditional dance clubs like Halo (which presents Rave Wednesdays) to rock-oriented spaces such as the Neighborhood Theatre and Fillmore (both of which have hosted Mindelixir's Bass Church events). There's also Le Bang at Dharma, ID Saturdays at Phoenix, EDM Wednesdays at Marigny and Wednesday Humps You at the Chop Shop.

"In the '90s, there was a lifestyle around EDM," Kastanas says. "It created fashion and a vibe. That's what's missing now. Hopefully, as time goes on, the [new scenes] will come together more and be more united and cohesive. There's a lot of great local DJs and a lot of great national names that have settled down in the area."

Indeed, DJ Odi isn't the only dance-music innovator who's relocated to Charlotte to plug into the energy. The producer and DJ David Heartbreak, a leader in the D.C.-spawned EDM subgenre moombahton, moved from Brooklyn to the University area four years ago. And house DJ Peter Presta, who has produced or remixed hundreds of tracks, most notably the Queer as Folk title track, "Proud," moved from Long Island to the northwestern outskirts of Charlotte five months ago.

"I'm here to give people something different — I'm big into tough, pumping, filtered disco tracks and party tribal," says Presta, who is now a part-owner of Marigny and has worked with DJs from Moby to Victor Calderone, and remixed nondance acts ranging from Sade to (get this) David Hasselhoff. "There are clubs here that are playing underground music, and it made me realize that I can definitely do something and be a part of it here," Presta says.

Heartbreak moved here to help give Charlotte an "identity," but he says the people "have to want one." He notes that there are a lot of DJs in Charlotte, such as Kevin Focus, who don't get the credit they deserve. "It's hard to build a foundation for people who come and go," Heartbreak says.

Charlotte's longest-running regular EDM event is Mindelixir's Bass Church. Started at the Neighborhood Theatre in 2010, the show has become a showcase for local and national DJs from a variety of genres. Bill "Mindelixir" Schimel uses the monthly event as a sort of education tool for EDM fans to learn about what's new, hot and happening on the EDM scene. "It's not just Charlotte that's coming together for this," he told CL last year. "It's kind of the whole Southeast, which I love to see."

In December, Odi started Konkrete Jungle, his monthly gig at Crown Station Pub, along with a friend, the Charlotte DJ Spencer Sapien. It's an offshoot of the popular New York City event of the same name — the longest-running weekly drum-and-bass throwdown in the world. The February Konkrete Jungle event at Crown Station was Odi and Sapien's biggest yet, and Odi says part of the reason is that his sets appeal to older dance music fans who loved drum-and-bass during the genre's heyday and want to revisit the sound, but with newer and fresher textures.