I can't remember a memoir this good 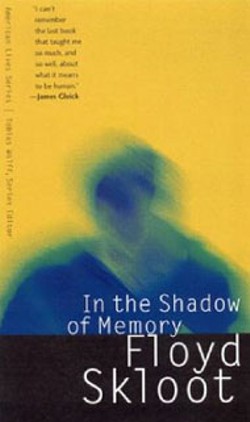 On December 7, 1988, Floyd Skloot settled into his hotel room after an exhausting cross-country flight from Oregon to DC and gratefully went to bed. He awakened the next day for his morning run to find that the simple act of dressing himself had become a baffling spatial conundrum.He pulled his blue wristband over his head like a sweatband (wondering at how it had shrunk during the trip), tried to open his hotel room door by pressing on the hinges, and somehow made it to the elevator, trying to get on it before the doors parted. Fifteen years later, having never recovered normal function, he would at last find a diagnosis: while on the plane, he had contracted a rare and freakish disease that had ravaged his brain, a "viral predator" that had destroyed pieces of his mind overnight as he slept.

Amazingly, if the subject of the book weren't Skloot's ongoing journey with the legacy of brain injury, nothing in it would clue the reader in to the author's disability. How can a man who has found himself trying to cut celery with a carrot, a man who forgets phone numbers in the act of dialing them, create essays that resonate with wisdom and emotional sagacity?

Perhaps because, as so often happens in life, after loss come strange and compensatory gifts. No longer at ease in his craft (he was a writer before his injury, and remains a writer still), Skloot now spends excruciating hours in acts of focus and recall, conducting the grueling ceremonies of memory he now requires simply to create a logical narrative. The resulting essays -- on fighting to stay qualified for disability, his bizarre Brooklyn childhood, his cruel and histrionic mother, his doomed and damaged brother -- shine with the distilled brilliance that is the tricky blessing of Skloot's new self and new style of craftsmanship.

Skloot's life is one of excruciating polarities, and he's clearly a man still in awe at his lot. On one hand, he has lost forever his former identity as a wage earner, athlete, and capably functioning human -- and that only after having been scarred both by severe brain damage and a mother who was a master of emotional abuse. On the other hand, fate has also handed him a loving wife and a marriage of moving intimacy, a peaceable relationship with his mother, continuing literary success, and a life of quiet and deep satisfaction in a humble house in the woods.

If this all sounds very Movie of the Week to you, let me tell you right now that it's not. Such is the book's profundity that it vaults such an easy and obvious classification with the grace of an Olympian. In the Shadow of Memory is neither wry nor humorous; these are qualities Skloot probably now has trouble producing in his work. It's not a "testament to the power to the human spirit." It is, rather, a rich, startling and profound meditation on one imbalanced and emotionally crippled human life thrown into balance by a fierce, transformative, never-ending battle with the betrayal of both mind and body.

Technically, In the Shadow of Memory is a book of essays on dealing with a faulty body and mind. But the essays are also, and are almost more so, stories not of living with injury or illness but of humbling transformation. They tell not only of the loss of the author's memory and motor function, but of the loss of one Floyd Skloot and the creation of another, of making do with what we are dealt, poor though the hand may be. It's not so much a look inside the addled head of a brain-injury survivor as it is a magnificently wise, book-length reminder that even a bad hand, if played right, may make us happy in ways a former self could not have even conceived of. Like all great works of art, the book's lessons can apply to almost anyone's life, not just the author's tortuous, hardscrabble, strangely glorious slice of it.