No room for an out gay man in King's circle 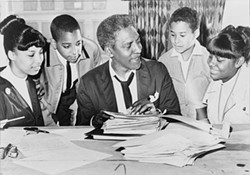 Numerous celebrations this week will honor the legacy of fallen civil rights leader Dr. Martin Luther King, Jr. This year is especially poignant: It marks the 50th anniversary of King's "I Have A Dream" speech, which he delivered during the historic March on Washington in 1963. But I would like to spend a moment celebrating an unsung hero of the civil rights movement, Bayard Rustin.

Rustin was a true Renaissance man who shined as an educator, artist, activist, visionary and organizer. He was also pacifist who studied the nonviolent protest techniques of Gandhi. Many are not aware that Rustin was the genius behind organizing the March on Washington, one of the most ambitious and historical peace rallies of that era.

In February 1956, Rustin arrived in Alabama to assist King with the Montgomery Bus Boycott and found armed guards and guns in the young preacher's home. King was far from a pacifist. It was through Rustin's guidance that King eventually adopted his nonviolent philosophy of protest. For a while, Rustin served as a close adviser and would help mold King into the globally recognized symbol of nonviolence.

But if Rustin played such an important role, why do so few people know about him?

Rustin was an openly gay man, which didn't sit well with many leaders in the civil rights movement. (We have to remember that those were very different times.) Rustin was a man of great character but also an out gay man who proudly walked in his own truth. He refused to live in the closet, so King's advisers asked him to quietly step back from the spotlight.

I am an African-American gay man. Though I was older once the civil rights laws had been passed, in many areas of the South, where I grew up, it took awhile to change the culture and mindset of most folks, white and black. I remember separate rest rooms and even a "whites only" laundromat in my grandparents' small town.

I am also the product of a historically black college and have been an educator at two historically black institutions. Not even in environments committed to the black experience was I ever introduced to Rustin. I discovered him and his monumental contribution to the civil rights movement years into my tenure. As excited as I was to find this unknown black gay hero, I could not shake the anger I felt for being denied such an important role model. I still don't understand how a marginalized group can marginalize one of its own.

I studied film in graduate school and believe part of the responsibility of storytellers is to sometimes re-address history. Boycott is the only contemporary film I have seen that acknowledges Rustin and includes him in the historical narrative. Rustin's meeting with King plays out beautifully in the movie.

There is also a wonderful award-winning documentary, Brother Outsider, that chronicles Rustin's contributions and complex life. (You can find more information on the documentary at www.rustin.org.) The documentary's interviews, some featuring Rustin, show how challenging it was — and, sadly, still is — for a gay African American to negotiate and reconcile his or her ethnicity and sexuality within the black community.

As I reflect on the "I Have A Dream" speech today, I feel there cannot be a more appropriate example of King's expectations that a man like Rustin can finally take his rightful place in history. A place Rustin earned regardless of his sexuality, but because of the strength of his character and fearless commitment to peacefully serving his community.

Charles Easley is an educator with a background in communications and media. He often writes on race, class, gender and sexuality.