Baywatch barely earns its place in the sun | Reviews | Creative Loafing Charlotte
Switch to the mobile version of this page.

Baywatch barely earns its place in the sun 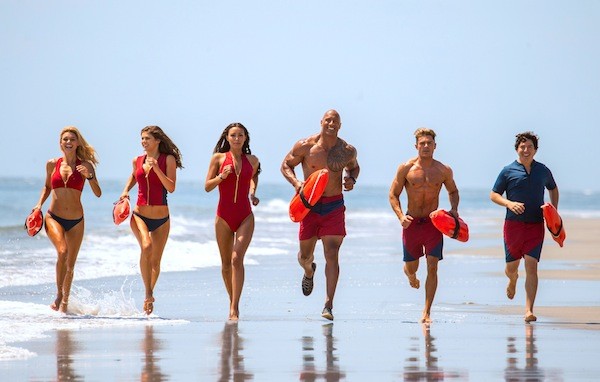 The big-screen version of the imbecilic TV series that ruled ‘90s television, Baywatch is pretty much indefensible. Nevertheless, like my cousin Vinny bucking the odds in the courtroom, allow me to defend at least parts of it. Those would be the parts involving a charismatic leading man and no small measure of knowing laughs.

A movie based on a show about brain-baked lifeguards isn’t going to stir memories of, say, A Man for All Seasons or The King’s Speech or even Guardians of the Galaxy Vol. 2, but within its own parameters, Baywatch knows the territory. The plot is flimsy but enough to get the movie from point A to point B (if not much beyond): Stalwart lifeguards defend their stretch of the beach against criminals hoping to seize it for their own nefarious purposes. On second thought, flimsy might be too strong a word.

The MVP is, of course, the impossibly appealing Dwayne Johnson, cast as head lifeguard Mitch. The film has fun playing off the actor’s image as everyone’s best – and best-built – buddy, and he’s equally ingratiating whether receiving or (more often) delivering the cutting zingers. Mitch’s favorite target is a narcissistic Olympian named Matt Brody, and Zac Efron surely deserves some sort of Good Sport award for allowing himself to be the movie’s version of Lou Costello.

That Baywatch was written entirely by men can be deduced by simple math. There are four beautiful women in the primary cast (Alexandra Daddario, Kelly Rohrbach and Ilfenesh Hadera as lifeguards and Priyanka Chopra as the villain) but only two beautiful men (Johnson and Efron). The inequality is partly because the other male lifeguard is the audience surrogate, a shlub who looks like Josh-Gad-with-training-wheels. The character of Ronnie (played by Jon Bass) is there for the same reason that Ron Jeremy has prevailed in porn, so that ordinary, uncool guys can excitedly point and breathlessly intone, “If he can make it with the ladies, then, by God, so can I!” This Josh Gad Jr. isn’t particularly funny or endearing, but he of course gets the girl (well, one of the girls) — this bit of wish fulfillment should add an extra five or so million to the domestic box office. On the other hand, the only nudity in the film comes not from the four beautiful women or the two beautiful men but from this guy, so maybe subtract a mil due to the expected gay panic on the part of the intended audience.

Speaking of the male writers, it took three separate teams of two guys – six total writers! – to produce this script. It was probably worth the piling-on, considering one team was previously responsible for Norbit, one for Freddy vs. Jason, and one for those inane Night at the Museum flicks. Perhaps these gents were able to weed out much of each other’s rancid material, allowing several amusing bits to float to the top. On the other hand, the juvenile antics that do drag down the picture – moments like Mini-Me Josh Gad unable to conceal his erection or Efron fondling a corpse’s testicles – clearly reveal the fingerprints of man-children who have previously toiled for the likes of Kevin James, Jimmy Fallon and The Smurfs. It’s too bad a skilled comic writer like Tina Fey wasn’t tapped to drop the boys-will-be-boys drivel and beef up the potent bits that were already in place. Or how about Aaron Sorkin? I imagine Aaron Sorkin writing a Baywatch movie would pretty much be on bucket lists left and right.

But I digress. Bottom line: Baywatch ain’t great, but after such duds as that King Arthur clunker and the latest Jack Sparrow droppings, you could do worse than a day at the beach.