Barbecue and beyond at Mac's 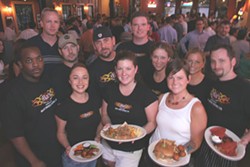 Beer, bikes, and barbecue. Blue jeans, baked beans, bar stools, bankers, and other B words are found in abundance at Mac's Speed Shop & Barbecue on South Boulevard in SouthEnd/Dilworth. Named for the building's original business, Mac's Alternator Shop, this venture is the third for veteran restaurateur and Harley-owner JD Duncan who also owns Bonterra Dining and Wine Room in Dilworth, and the Ratcliffe on the Green downtown.

Mac's is anything but pretentious. During the first month, when patrons signed their names and wrote messages on the bar stools, this raucous spot instantly became a gathering place for Charlotte's motorcycle aficionados. The parking lot could be a Harley-Davidson sales lot.

But the patrons of Mac's are not the burly macho guys stereotyped on television detective shows -- well, maybe a few are. Some are former Easy Rider hippies who now make big bucks in the banks. Others come from varied backgrounds, but guessing from their jean brands and T-shirt collections, I'd put money on those bikes being garaged in zips ending in 3, 7, and 11.

Barbecue is one of the foods we take quite seriously here in Carolina -- and so does Mac's. This is the "come together" food of the masses and folks argue about dips versus sauces, sweet versus acid, gas versus wood. To me, the best barbecue comes from the open pit, prepared over the glowing coals that only hickory wood can produce. I am well aware of the various restrictions on restaurants having open pits, as well as the dangers of cooking over an open fire. We all know the stories of the old barbecue place that burned to the ground. Don't get me wrong: gas and smoke can produce some mighty fine 'cue. However, gas just can't get the meat to the "outside brown" that slow-cooked over wood can. Think of the difference between the taste of pizzas and chickens cooked in wood burning ovens or rotating gas ovens. Wood imparts a distinct flavor that cannot be replicated over gas.

That being said, the barbecue at Mac's, which is smoked in gas chambers, is quite good. The pulled pork is flavorful and the customer has an additional selection of sauces housed in a six-pack beer carton on each table. Most of the sauces and dishes are from the family of Chef Dan Boone and are not regionally oriented. In other words, these are not the Eastern, Lexington, Memphis, and South Carolina sauces typically found in barbecue joints. The St. Louis-styled ribs, although meaty, were not the falling off the bone ribs I expected.

The one standout side is "Sis Gibson's Barbecue Baked Beans" with locally made Neese's sausage. I guess this is one food that's eminently suitable for bikers (ahem). The Brunswick Stew, on the other hand, lacked smoke and the melding of flavors. Typically, the rustic stews found at side of the road 'cue joints dotting Carolina back roads simmer for a long time -- probably until the batch sells out. To some, thickeners such as bread or rice are added. Mac's stew tasted more like a soup. The freshly chopped cole slaw and densely flavored mac and cheese, however, benefited from the hand of a trained chef. For desserts, the delicious blueberry and peach cobbler was sweet but not over-the-top heavy.

The servers seem overwhelmed at times, but the kitchen has it going on. The food comes quickly, if and when the server picks it up. For those of you who able to carry on a conversation with a passenger on your hog, you'll have no problem at Mac's. Anyone else should probably sit outside if you want to chat.

The menu also includes Texas beef brisket, salads, and burgers and is sprinkled with humor: Joe's Vespa Veggie Burger" and "The Side Car...Babe not included." The ever-changing beer roster includes 160 bottles of beer and six more on draft.

Bikers and barbecue have much in common since they both cross socio-economic lines. And Mac's is a hip place, a Charlotte kind of place with its dry-cleaned grunge appearance, good food, and a fun be-seen atmosphere.

Many of the 2004 Charlotte Wine & Food Weekend series of Vintner Dinners were sold out by October 2003. Some of you were upset not to have the chance to buy tickets. So heads up: tickets go on sale Saturday, Oct. 15, for these events scheduled for April 20 through 22, 2006. Events include the popular Seventeen Vintner Dinners ($125) at area restaurants; a tasting featuring Food & Wine Magazine's Winemaker of the Year, Philippe Melka, showing 10 consecutive vintages (1995-2004) of his wines, including cult favorites such as Bryant Family and Hundred Acre ($250); The 1000 Point Tasting, showcasing 10 international wines that have achieved 100 point perfection moderated by Kevin Zraly; Big Bottles & Blues, a casual outdoor celebration featuring vintners, auctions, and entertainment by the Purple Feet Band AKA Bob Foley's band ($85); the Johnson & Wales Culinary Experience, where attendees will participate in small hands-on workshops by JWU's instructors ($200); a series of three Enthusiast Tastings, featuring some of the weekend's special guests including winemaker Bob Foley; the Marchesi di Frescobaldi of Frescobaldi in Tuscany, Italy; and Pinot Noir specialist, Allen Meadows; a Champagne Brunch & Fashion Show; the Vintner Tasting ($30); and the Grand Live Auction & Gala ($125). Reservations will open on the Charlotte Wine & Food Weekend Web site Saturday, Oct. 15: www.charlottewineandfood.com.

Have a restaurant tip, compliment, complaint? Do you know of a restaurant that has opened, closed or should be reviewed? Does your restaurant or shop have news, menu changes, new additions to staff or building, upcoming cuisine or wine events? Note: We need events at least 12 days in advance. Fax information to Eaters' Digest: 704-944-3605, or leave voice mail: 704-522-8334, ext. 136. To contact Tricia via e-mail: tricia.childress@creativeloafing.com.

Hours 11am until 2am daily. Sunday hours may be earlier