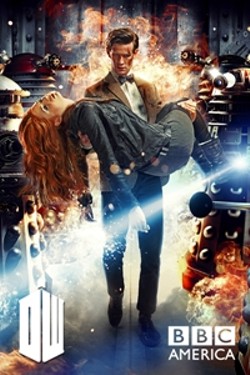 BBC America presents the U.S. Premiere Screening of the New Season of DOCTOR WHO. Immediately followed by a live Q&A with the Cast & Executive Producer. Don't miss your first chance to see "Asylum of the Daleks," the season premiere of the all new series, before the premiere on BBC America's Supernatural Saturday, coming this Fall. The new season will see the last days of the Ponds, with Karen Gillan and Arthur Darvill making their final rollercoaster voyage with The Doctor. Amy and Rory have been at the Doctor's side for more than two seasons but what will he do after their heartbreaking departure? Prepare yourselves for thrills, adventures and dramatic surprises as the show builds towards its enormous, climactic 50th anniversary year.

BBC America Presents: U.S. Premiere Screening of Doctor Who New Season + Q&A is not showing in any theaters in the area.