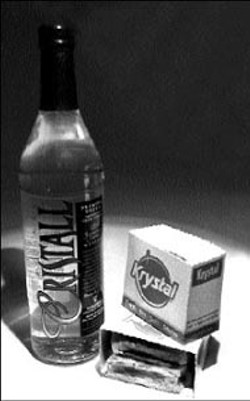 Food experts have recently been fixating on a so-called "new" category of food called "comfort foods" which have been spawned by the dramatic events of 9/11. These are newly respectable foods which we are told we eat to make us feel better in tough karmic times. They include rich desserts, childhood favorites, and greasy fried finger foods -- all the same stuff that pre-9/11 we were told would have caused us to pound the scarlet 'XXXL' on our clammy chests in a Chris Farley-like self-fibrillation spasm.

In truth, these "comfort foods" are really nothing more than good old-fashioned junk food destigmatized and repackaged in a more socially acceptable wrapper. You're damn straight they make us feel better, but there's really nothing new about them. They have always been a staple of the American diet, even if the more "respectable" among us (present company excluded) would only eat them with equal parts of denial and shame, cowering and picking off crumbs with the blinds drawn in a dark corner of the basement lest Richard Simmons accuse us of being naughty boys in need of punishment. Hey, if Emeril and Martha Stewart doing TV specials on "comfort foods" removes the stigma of eating a Ring Ding in public, I say, "Bam! That's a good thing."

Along these lines, this week's column concerns a sub-category of comfort or junk foods which I like to call "drunk foods." These are items which you've just got to have at about 2am after pounding down a yeoman's share of Milwaukee's (or Munich's) finest.

White Castle Hamburgers: White Castle burgers are 2.5" square beef patties with five holes in them. They're steam grilled on a bed of onions 30 at a time and served on a steamed bun with a single slice of dill pickle. (The five holes were added in 1949 to eliminate the need to flip the burgers.) The buns are placed on the top of the burgers and onions while cooking to absorb the wafting onion flavor -- and grease. Usually served with ketchup, the White Castle experience is a marriage of the flavors of its composite ingredients, creating a new flavor sensation in your mouth.

Pros: The ultimate drunk food. These little Belly Bombers are to grease what hot Krispey Kremes are to sugar. Fish sandwiches are available at most stores which will allow the true connoisseur to enjoy the off-menu Surf'nTurf sandwich. Regular or Jalapeno cheese is available. The Ohio outlets (see Cons below) feature Barq's Red Soda, almost worth the trip by itself.

Cons: It's not the same coming from your grocer's freezer, so getting the real deal is not easy. The closest retail outlet is about 480 miles straight up I-77 at exit 120 just outside Akron, Ohio. The Slyder Experience will therefore require an incredibly accommodating designated driver after a night of heavy drinking.

Fun Facts to Know and Tell: The first White Castle opened in 1921 in Wichita, Kansas. There are no franchises, all restaurants are company owned.

Krystal Hamburgers: Krystal burgers are also 2.5" square beef patties but they have no holes. They're grill-fried with diced onions and served on a yeasty roll with a thinly sliced pickle. They are usually served with mustard. The Krystal taste experience is one where each of the composite flavors remains distinct as you eat the burger.

Pros: The Southeastern version of the ultimate drunk food. Relatively easy to find with two Charlotte locations. You can also get chili cheese fries and Cheerwine soda. Go-cups for fries fit nicely into cup holders.

Cons: No Surf'nTurf or thick shakes available. Not bad but just not the same, sort of like kissing your sister, which might be due to Kristal's backwoods Tennessee heritage.

Pros: Drinking these shots by the sack will make you witty, smart, and urbane (as far as you know). Consumed in quantity, you will find yourself if not in the sack, at least half in the bag.

Price per serving: Depending on your pouring hand, between about 80¢ and 95¢ a shot (wholesale).

Fun Facts to Know and Tell: Formerly sold as Stolichnaya Cristall, it is also available in a Lemon Twist flavor. Made from glacier water twice filtered through Russian Native Birch carbon granules. Based on my experience, it will convince you that you are Rasputin. *