Blockers misses some moves | Reviews | Creative Loafing Charlotte
Switch to the mobile version of this page. 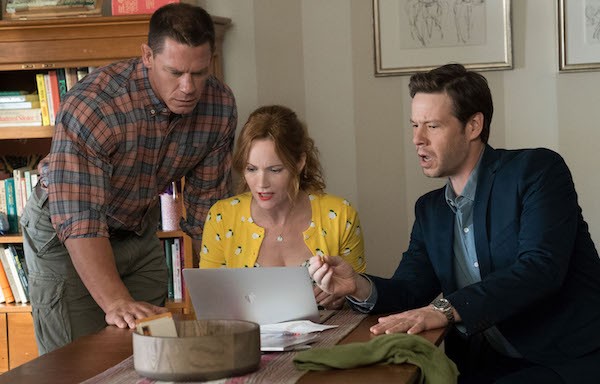 It all starts going downhill around the time Jon Cena drinks beer through his butt. Until then, Blockers is a rather savvy and – if you squint really hard — even subversive comedy about three high school seniors who make a group pledge to all lose their virginity on prom night.

The twist here is that it isn’t the usual horndog bros seeking that epic lay – there’s nary a Stifler nor Shermanator in sight — but rather three smart and sensible girls opting to go all the way. Mainstream movies centering around the sexual agency of teenage girls are so rare that Blockers is being greeted with the same degree of hushed awe usually reserved for long-lost Orson Welles projects. Alas, that speaks less about the shaky quality of this movie than the painfully slow progression of this country.

Julie (Kathryn Decker) initiates the pact, by announcing that she plans to make love to her boyfriend Austin (Graham Phillips) immediately after prom. Her best friends Kayla (Geraldine Viswanathan) and Sam (Gideon Adlon) quickly agree, with Kayla planning to score with her lab partner Connor (Miles Robbins) and Sam settling on the jovial Chad (Jimmy Bellinger) even though she’s a closet lesbian and would rather spend time with classmate Angelica (Ramona Young).

When the three girls’ parents learn of their plans, they set out to stop them. Lisa (Leslie Mann), Julie’s single mom, feels her daughter will make a mistake that could ruin her life. Mitchell (Jon Cena), Kayla’s dad, doesn’t share his wife’s (Sarayu Blue) views on female independence and plays the overprotective pop to the hilt. And since Hunter (Ike Barinholtz), Sam’s divorced dad, intuits that his daughter is gay, he doesn’t want peer pressure to force her into a compromising position with a guy.

The vast majority of the sizable laughs are packed, not unlike sardines, into the first half of the film, and there’s ample mileage found in the various generational conflicts – the ones that reveal that even the coolest of parents will still appear as anything but hip to their easily embarrassed offspring. But the freshness of the initial hour eventually gives way to a more pat second half that unspools in predictable fashion, with everyone learning the types of life lessons generally found in Disney animated features. And while the digs at sexist double standards remain on view throughout the picture, they get harder to spot in the second half, obscured by slapstick sequences and raunchy gags that do little more than block the film’s salient points from reaching full fruition.