Bloodkin gets its second wind 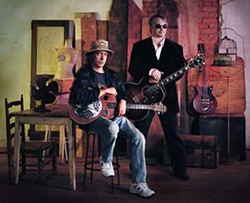 After 20 years, it's no surprise the co-founders of the band Bloodkin have been through their share of ups and downs. Daniel Hutchens and Eric Carter first started playing music together when they were in elementary school. Though the duo has had different bandmates over the years, they've released eight albums and are currently fueled by a new-found sobriety that has sparked new life into a band that was just about written off by its primary players.

When Hutchens was working on 2005's Last Night Out, he pretty much assumed it would be the band's last because he or Carter were likely to be dead soon after. However, instead of going into a deeper darkness, Hutchens instead moved to Colorado and found sobriety and a new lease on life. Carter followed with a stint in rehab soon after Hutchens returned from Colorado.

"Last Night Out was a personal rock bottom for me," Hutchens says by phone from his Athens, Ga., home. "It was alcohol and drugs -- at different times, it was different things. There was a lot of cocaine going on a certain time and there was a whole lot of drinking going on for several years. Eric's right at one year sober at this point; it's pretty incredible.

"For whatever reason, I pulled out of it. I started to play music again and in the process of that, I brought in guys from Bloodkin and it all clicked so well that we started playing shows for fun. It took off and was the genesis of the new record. I think that was what shook Eric, because he liked it and wanted to be a part of it."

Hutchens' first album after returning was a solo release, Love Songs for Losers. He says his solo albums helped fill a void while Bloodkin had taken some time off. The band is currently touring in support of the recently released Baby, They Told Us We Would Rise Again, which came out in February of this year. He says the band has pride and clarity now and can also literally "stand up on stage."

"We came so close to completely falling off the edge, that we're really appreciative of what's going on now," Hutchens says. "This new album and Creeper Weed are probably my two favorite albums. I'm not the most objective guy, but it has a lot to do with my associations of making those records. There was a lot of camaraderie and enthusiasm of making them."

Baby's music takes the listener on a journey from a dark place to redemption in the course of 10 tracks. It wasn't planned that way, but Hutchens says it all came together in the writing process. "We had a batch of about 30 songs and it was a matter of picking out what we wanted on the record," he says. "I don't plot it out, but just have to see what I have when I'm done writing and what fits."

As far as the band's sound, a list of their influences and friends can clue you in quickly -- Drive-By Truckers, Son Volt, Bob Dylan, The Beatles, Widespread Panic. The Truckers' Patterson Hood wrote the album's liner notes after numerous run-ins at the recording studio. The opening track on the new album, "The Viper," is a Southern rocker that looks at a hard life of drugs and hangovers.

It's been a long road for the duo, who first met because they lived on the same street when they were around 8 years old. What started out as drawing comic books together, eventually developed into a band. They started playing music together around age 12 or 13. Hutchens says most of his life experiences are relatable to when an album came out even though the band hasn't really changed that much over the years.

"I think a few years before that first album came out, Eric and I kind of mapped out the sound we were looking for," Hutchens says. "We wanted a Rolling Stones-y, little bit sloppy, revved-up rock 'n' roll thing. One of the records may be more acoustic-flavored, but I don't think there's been a drastic change in styles."

The only thing that has changed are the band members. The current lineup -- David Nickel, Aaron Phillips, Eric Martinez, Williams Tonks -- has been intact for roughly two or three years. Phillips was a former member of the band that is back on his third "tour of duty." Tonks has also been with the band "on and off for 20 years."

Hutchens is aware his path wasn't the usual one -- knowing someone outside of their blood relations since they were eight years old. That also happens to be one of the ideas, and the irony, behind the band's name.

"I've definitely spent more time with Eric than anybody in the world," Hutchens says. "Our manager is pushing for our next record pretty hard already. We're in the songwriting stage right now. We'll do it like the last one and write a bunch of songs and see what bubbles to the surface."

Bloodkin will perform at the Double Door Inn on April 2 with George McConnell. Tickets are $8. Doors open at 7:30 p.m. and the show starts at 9 p.m.