Bob Hope, Elvis collections among DVD reviews | View from the Couch | Creative Loafing Charlotte
Switch to the mobile version of this page. 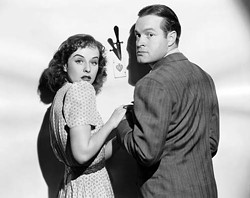 BOB HOPE: THANKS FOR THE MEMORIES COLLECTION (1938-1948). Regarded in many camps as the greatest all-around entertainer of the 20th century (and he has the record-setting number of awards to back that claim), Bob Hope found success in virtually every field, including radio, television and, of course, motion pictures. This box set brings together six films from his earlier years on the big screen.

Hope made his feature film debut in The Big Broadcast of 1938, a commercial hit that introduced his signature song, the Oscar-winning "Thanks for the Memory." Hoping to quickly cash in on its success, the studio was back nine months later with Thanks for the Memory (1938), which reunited Hope with his Broadcast co-star Shirley Ross in a stilted comedy about a couple who try to stop their partying ways long enough for him to finish his novel. The humor is often more grating than funny, though the badly dated material (the stay-at-home author finds his masculinity threatened by his working wife) may draw some chuckles from modern audiences.

Hope became a consistent audience draw with The Cat and the Canary (1939), a box office smash in which a group of relatives is gathered at an isolated house for the reading of a will. It proves to be a bumpy night: The sole benefactor (Paulette Goddard) will lose everything if she's declared insane, so strange things begin happening to her that force the others to doubt her sanity. Only one person (Hope) believes in her, but like the others, he's often distracted by the news that a homicidal maniac nicknamed The Cat has escaped from an asylum and is lurking in the area. Hope established the wisecracking, cowardly persona that would serve him well throughout his career (as well as influence countless other comics, Woody Allen among them), and the film offers a nice mix of humor and haunted-house thrills.

Hope and Goddard proved to be so popular together that they were paired again the following year for another horror-comedy blockbuster. The Ghost Breakers (1940) finds Goddard's Mary Carter inheriting a house in Cuba that's reportedly haunted; Hope co-stars as radio personality Lawrence Lawrence, who, falsely suspected of murder, hightails it to Havana with Mary. An even better mix of terror and titters than The Cat and the Canary – there's even a real zombie shuffling around the appropriately atmospheric sets – this not only finds Hope and Goddard pleasingly mixing it up but also gives Hope a fine sparring partner in Willie Best as his personal assistant. The racist aspects of the role can be unsettling (thankfully, Best is never forced to say, "Feets, do yo' stuff!"), but there's no denying the actor's natural thespian talent and impeccable comedic timing.

Hope, Goddard and Best were all brought back for Nothing But the Truth (1941), by far the least known film in this set but in my (presumably minority) opinion the one that offers the most belly laughs per minute. Hope plays a stockbroker who bets his associates that he can tell the truth for 24 straight hours; naturally, they do their best to make him lose the wager by asking him embarrassing questions and placing him in impossible situations. A great hook for a comedy is beautifully handled by the cast and crew – compared to this, Jim Carrey's similar Liar Liar seems as downbeat as Requiem for a Dream.

The "Road" movies starring Hope and Bing Crosby were so beloved that the duo made seven of them stretching from 1940 to 1962. If you're a fan of both entertainers, raise my rating for Road to Morocco (1942) considerably; unfortunately, I've always found Crosby to be such a monotonous actor (The Country Girl arguably excepted) that I could never enjoy these romps to their fullest. Here, the boys find themselves alternately begging for food on the Moroccan streets, lost in the desert, and wooing a beautiful princess (Dorothy Lamour). Hope is in fine form, and his final gag is a keeper.

Hope had another sizable hit on his hands with The Paleface (1948), an amusing Western comedy in which he stars as "Painless" Peter Potter, an inept dentist who unwittingly assists Calamity Jane (Jane Russell) in her undercover work for the U.S. government. Hope milks his cowardly routine for maximum impact; he and Russell are both terrific. This earned an Oscar for Best Original Song ("Buttons and Bows").

Thanks for the Memory: **

CADDYSHACK (1980). A classic only in the eyes of those who use the term loosely, Caddyshack is far from the best SNL-flavored comedy but offers enough in the way of laughs to earn it a respectable recommendation. Michael O'Keefe, Oscar-nominated for his dramatic performance as Robert Duvall's sensitive son in the same year's The Great Santini, here plays Danny Noonan, a caddy at a posh country club lorded over by the stuffy and corrupt Judge Smails (Ted Knight). Danny's hoping to win the judge's favor in order to secure a scholarship; for his part, Smails is distracted by the presence of the vulgar, nouveau-riche Al Czervik (Rodney Dangerfield). SNL vets Chevy Chase and Bill Murray are also on hand, the former as a laid-back golfer, the latter as the slovenly assistant groundskeeper at war with a pesky gopher. Murray's fine when he's ad-libbing monologues, less amusing when the script requires him to chase after the animatronic critter. Regardless, it's Dangerfield who rules this show: His delivery of some truly hilarious one-liners is spot-on ("This is your wife?" he asks Smails. "A lovely lady. Hey, baby, you're all right. You must have been something before electricity, huh?"), and his supporting turn served as the launching pad for his starring roles in 1983's Easy Money and 1986's peerless Back to School.