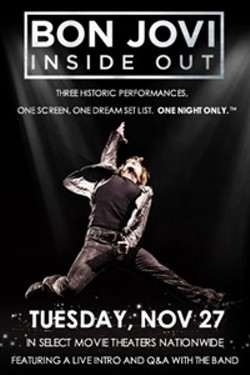 Featuring a hand-selected set list from their catalog of hits, BON JOVI includes the iconic band's best performances from their sold-out, 12-night stand in London's O2, the inaugural multi-night run at New Meadowlands Stadium and their celebratory shows at the famed Madison Square Garden. Split-screen footage will provide a unique view of the band performing this dream set list, creating a unique concert experience.

In addition, this not-to-be-missed event will feature band members Jon Bon Jovi, Richie Sambora, David Bryan and Tico Torres in a LIVE broadcast from Times Square, in which they will answer fan questions and discuss their upcoming 2013 Tour and highly anticipated new studio album to be released this spring.

BON JOVI is not showing in any theaters in the area.