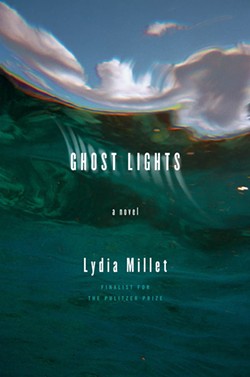 Author and UNC graduate Lydia Millet's reputation has deservedly been on the rise the past couple of years, and her beguiling new novel, Ghost Lights, should boost her farther up the totem pole. An acquired taste for some, and a brilliant, hilarious, generous free thinker to others, Millet isn't a typical contemporary American literary writer. In other words, she doesn't flog overly precious prose to closely examine every nuance of otherwise mundane relationships. (OK, that's this month's slam of most U.S. literary fiction.)

Ghost Lights follows Hal Lindley, a drab IRS employee who, in his own words, is "a typical domestic drone, a man wrapped up in the details of his own life and only his own." Hal is married to Susan, whom he believes is having an affair with a co-worker; Hal and Susan have a grown daughter, Casey, who is wheelchair-bound due to a terrible accident. For Hal, Casey's situation is so awful (although she's managing pretty well), his own sadness becomes more than he can handle. He's desperate and hardly knows why — which leads him, at the first opportunity, to "run screaming into the forest." That's a phrase Millet uses to describes the protagonists in her trilogy-in-progress, of which Ghost Lights is the second part.

In the trilogy's first novel, How the Dead Dream, T., a young real estate developer, realizes his chosen life is too detached and lonely, and soon starts breaking into various American zoos, where he somehow finds comfort in the presence of animals on the brink of extinction. Finally, T. tromps off to the jungle in Belize (or, in Millet's words, runs screaming into the forest) to be with nature. Things get shaky at home, however, when he isn't heard from again. Now back to Ghost Lights. Hal's wife Susan worked for T. Now she's worried sick about T.'s disappearance, and Hal impulsively volunteers to go to Belize to find T., thus also running screaming into, etc.

Once ensconced in a swank hotel in Belize, Hal meets some German tourists who take a great interest in his quest to find T. They also give him new reasons to reconnect with life, its enthusiasms and new experiences. Much of the book relates Hal's inner life and thoughts, as he takes a serious inventory of his life for the first time, doesn't like what he finds, but keeps plugging away in the search for T., or at least T.'s fate. Both good and bad can come from self-discovery, of course. When a conventional, albeit well-meaning dullard like Hal dives into his own psyche, while he's also going through radically new, unfamiliar experiences, it can make for pretty rough sailing, as Hal finds out.

Millet is as enthralled by the natural world as always. The Boston-born author earned an M.A. in Environmental Policy from Duke, and then worked for years as a fundraiser for the Natural Resources Defense Council. It's no surprise, then, that much of her fiction touches on humanity's relationship with the natural world. That was the case with the book that finally garnered her more public notice, the 2009 short story collection Love In Infant Monkeys, which was a finalist for the Pulitzer Prize for fiction.

Millet's writing here is in a more clipped, or streamlined, style than she's shown before. Her usual lyricism only pops up occasionally, which is fitting for the tense feel of mystery that grows throughout Ghost Lights — and helps her clever storytelling flow more effectively. Her wonderful, absurd sense of humor and off-center view of life remain as delightful, and unsettling, as ever, as does her vivid fascination with animals (dogs of various sorts play significant roles in this novel).

In the end, Ghost Lights starts piling up clues about T.'s disappearance, and the tension builds, but whether any of this will help Hal break out of the dull, ridiculous mess his life has become remains to be seen — or at least to be discovered by other readers, as this reviewer doesn't do spoilers.

Some critics say that Millet too often seems detached from her characters and her writing lacks emotional punch. Maybe they're confusing some of her characters' detachment from life, which is, of course, her point. Her emphasis on nature is a given, but she never stoops to self-righteous preaching. At the very least, Millet, I feel, is always really smart and really funny, and her vivid writing is obviously the product of a fascinating mind. And that's not something you can say about many popular writers today.