Wicked a wonderful whizbang of a show 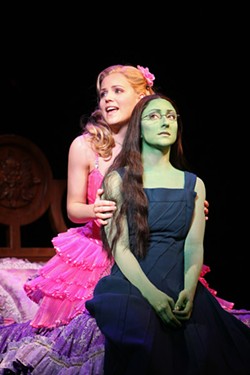 So often, when a hit Broadway show reaches Charlotte, we need to dampen legendary expectations – enflamed by stupendous hype – to realistic proportions. When the likes of Les Miz, Phantom, or Miss Saigon go out on tour, they often leave a significant portion of their technical dazzle behind. Or the cast doesn't possess the electricity that enables a big glitzy show to connect with an audience. Or the legendary hit wasn't all that good to begin with. Or -- to single out the special case of Cats -- all of the above.

Well, if you're one of the lucky few who have snagged a Wicked ticket, let your expectations run wild. While we can quibble over ranking this Broadway import over the lordly Lion King for technical dazzle and polish, I can positively say that this is best show I've ever seen at Ovens Auditorium.

Music by Stephen Schwartz exceeds the dismissive reviews that greeted the score in New York, with a couple of sensational duets deep in Act 2 pairing Elphaba, better known as The Wicked Witch of the West, with her dashing admirer Fiyero and her rival/best friend Glinda, the erstwhile Good Witch. And Winnie Holzman's book, radically different from the Gregory Maguire novel that served as her source, does an admirable job of telling a complex story -- and developing a colorful gallery of characters -- while sustaining our involvement for a full 144 minutes.

Visually, set design by Eugene Lee and lighting by Kenneth Posner are consistently spectacular, perfectly complemented by Susan Hilferty's costumes and Tom Watson's wigs. This fresh Oz derives amazingly little from MGM until we reach the Emerald City and the Wizard's sanctum. Glinda, who turns out to be something of a suck-up in her younger days, tends to waft in on a quaint bubble that echoes the large askew clock that looms in the background. Flying effects by ZFX are reserved exclusively for Elphaba and used sparingly.

Does it all work? Believe it. At the end of Act 1, with Elphaba "Defying Gravity" for the first time, the opening night crowd let out a spontaneous roar of shocking magnitude, far louder than anything I've heard indoors since the glory days of the Charlotte Hornets and the Charlotte Coliseum.

You aren't likely to be disappointed with any of the performers, no matter how precious the slippers they're called on to fill. Carmen Cusack nails the deadpan honesty of Elphaba without losing our empathy -- she really tugs at our heartstrings in "No Good Deed" when she resolves to cross over to wickedness forever -- and the fervor of her singing will rattle your spine.

If you have your heart set on a Tinkerbell for Glinda, then Katie Rose Clarke will not match Kristin Chenoweth for cute, diminutive perkiness. But Clarke, under the able direction of Joe Mantello, gets all the comedy, and she hits all the stratospheric notes that Chenoweth is famous for with absolute purity and confidence. Physically, she may be better suited for the dumb blonde aspects of Glinda.

You'll find the same level of excellence in the key supporting roles: Cliffton Hall as the narcissistic Fiyero, Lee Wilkof as the Wizard, Alma Cuervo as sorcery teacher Miss Morrible, and Deedee Magno Hall as Elphaba's tedious sister Nessarose. While it often helps to remember the original Oz screen classic, we're tacitly asked to blur our memories when the timeframes of Wicked and The Wizard overlap.

Not to worry. This new Oz and Emerald City are quite wonderful in their own way. What a world, as Margaret Hamilton once said.

OVER THE PAST 21 YEARS, I can point to a handful of local theater productions that totally eclipsed their Broadway counterparts. Charlotte Rep's productions of Noises Off and Angels in America: Part 1 are in that special circle of presentations that had a surer grasp of the playwright's intent and inspiration than the versions I saw in New York. More recently, the Actor's Theatre version of I Am My Own Wife starring Scott Ripley.

Now with a smartly managed production of Douglas Carter Beane's The Little Dog Laughed, another title climbs onto my short list. Director Dennis Delamar -- he also steered Ripley in My Own Wife -- takes us beyond the slick comedy veneer of the Broadway version so that we care whether lesbian Hollywood agent Diane closes her movie deal. That helps us stay invested with Diane's gay client Mitchell and his efforts to find happiness in or out of the closet.

Yes, I'm saying Kim Cozort gives more dimension to Diane than Julie White's sharp, wildly praised portrayal on Broadway -- without sacrificing any of the comedy. On the contrary, by the time I saw White, she seemed to be on cruise control, far exceeding the speed limit on line delivery while emotionally across the bridge in Jersey. After revealing her sexual preferences, White never acted upon them.

Delamar makes sure Cozort doesn't neglect that delicate point during the climactic confrontation where Diane shows her manipulative mettle. Here's the tangle: Mitch has met a high-dollar callboy whom, he slowly realizes, he'd like to have a relationship with. Even if it means coming out of the closet.

As it happens, the hireling has some sexual uncertainties of his own. Until meeting Mitch, Alex has only done men for the money, and he's living semi-intimately with Ellen. So there are complications and jealousies among the four characters that intricately straddle their professional and personal lives.

Two-time CL Actor of the Year Brian Robinson is certainly exploring fresh frontiers as this gay Left Coast hunk and conquers Mitch on charm -- and intensity where required. The real finds here are Ian Bond as Alex and Glynnis O'Donoghue as Ellen, both out of the Davidson College theater program. O'Donoghue's comedy bravura, in particular, brings Ellen to the forefront. On Broadway, she receded to the background as troublesome baggage. You'll like her -- almost as much as Diane does.