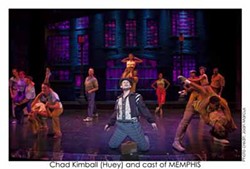 Until the 2008 election, race was the crucible of American life -- the original sin of the US Constitution, the wedge issue of the Civil War, the seething resentment that continued to boil over into riots, marches, and assassinations. Then in November 2008, Barack Obama was elected president. We were now beyond our racial hangups and divisions.

So in 2009, the floodgates have opened up in New York City, and Broadway is having the conversation in earnest.

Not that talking about race was banned before. Sue and I saw The Color Purple during our 2006 pilgrimage to the Great White Way. A year earlier, we braved the frigid winter cold to marvel at August Wilson's Gem of the Ocean. Those two shows, by revered African American writers, were certainly powerful, but white folk played only peripheral roles in the drama.

The 2009-10 Broadway season boasts more racially-conscious -- and confrontational -- musicals and plays than ever before. Nor can any of these shows be accused of addressing the issue obliquely. In David Mamet's Race, a team of lawyers, one black and one white, brainstorms how they will defend a high-profile white client accused of raping a black woman. Tracy Letts's Superior Donuts explores the mutual suspicions of an aging white hippy shop owner who hires a young black writer as his assistant.

Musicals stretching back to Show Boat have been part of the ongoing symposium -- but only intermittently. This season, we've already seen Memphis, loosely based on the life of 50s deejay Dewey Philips. Huey, as he's now called, not only plays black music on a white radio station, he has the temerity to kiss his black girlfriend while she's singing on his TV show. Ten days after Memphis rocked New York, a reshaped Finian's Rainbow was revived, where a bigoted U.S. Senator from the Deep South suffers the humiliation of becoming black.

With In the Heights and the revival of West Side Story opening earlier in 2009 -- and the 2008 revival of South Pacific still going strong -- America as melting pot is very much on Broadway's front burner as the new decade begins. Question is, are audiences eager to taste the gumbo? We have a split decision there: while Race and Memphis seem to be building audience despite lukewarm reviews, Superior Donuts closed on January 3, and Finian's Rainbow -- in spite of glowing reviews -- closed on January 17.

Here's how I saw those shows, plus four others on and off-Broadway, during our annual winter getaway:

• Superior Donuts (***3/4 out of 4) -- Lacking the epic length and sweep of August: Osage County, Tracy Letts's compact new drama has been unfairly belittled. It's a tightly woven Chicago tapestry with people as precisely drawn as those who converged on Osage and finely nuanced relationships between them. Besides the white and black protagonists, there are a white and black cop, two Russian immigrants, two Uptown hoodlums, and a daffy old woman named Lady Boyle.

Letts expertly stirs all these urbanites into his storyline, strewing suspense and violence along the way that counterpoise the sharp comedy and budding romance. Michael McKean brings a grizzled Willie Nelson charm to Arthur, the taciturn Polish hippie who owns Superior Donuts, while Jon Michael Hill is bursting with ideas, energy, and eagerness to learn as Franco, his new assistant.

There's more to both of them than meets the eye. Franco has written what he hopes is the Great American Novel, and Arthur is eager to read it. But Franco won't show Arthur his manuscript unless the boss can name ten black poets. The outcome of this friendly wager deftly foreshadows the horrors to come.

Kate Buddeke is delightful as Officer Randy, the female cop who yearns for Arthur. While applying pointers on how to properly make doughnuts, Franco schools Arthur on the fact that Randy is "ready to go" if he'll only ask. That Arthur picks and chooses from the advice Franco offers on courtship is just one of the delights to be found in Letts's sensitively calibrated realism.

With its colorful offbeat characters -- and more modest production demands -- Superior Donuts could wind up attracting far more interest than August: Osage from community and regional theaters. It may not be superior to the Pulitzer Prize winner, but it's very, very good.