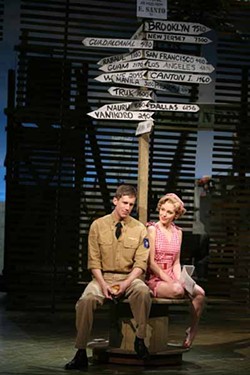 During the second full week of my current stay in New York, TV meteorologists announced "the first official heat wave of 2009" had finally hit the Big Apple. In Charlotte, we have a different terminology for a stretch of three or more consecutive days when the high temperature hits 90 degrees or above. We call it May.

Broadway is also unseasonably cool this summer. Teeming with dramas for the past two seasons, the Great White Way has shed all its non-musicals except for The 39 Steps. The latest departure, August: Osage County, occurred late in June after a healthy run, and the 2009 Tony Award winner, God of Carnage, is on hiatus through September 6, outlasting all its competitors.

Among musicals looking to make it through the long, cool summer, The Little Mermaid sent out its closing notice around the time I began booking reviews with Broadway press agents, and 9 to 5 followed suit after I'd done. Aside from Jersey Boys and West Side Story, all of the new musicals in this roundup are boosting sales with discount tickets, welcome relief for vacationing theatergoers who might otherwise balk at the $116-$125 they would have to shell out for the seats we got.

Discounts for Next to Normal ranged from 20 percent to 40 percent, and In the Heights discounts were routinely 40 percent. Others we found on the new TKTS toteboard -- South Pacific, Hair, and 9 to 5 -- were consistently 50 percent off on the day of the performance.

But if the population of Broadway musicals and plays has dipped below 20, there is no sparseness of tourist humanity in Times Square. The avenues have been permanently transformed into pedestrian malls, and a new apple-red rise of stadium seats slopes toward the TKTS booth and looks out on the downtown lights, inviting picnicking, picture-taking, and people-watching.

Culturally, summer in New York remains rife with festivals, even with the demise of the JVC Jazz Festival. When we arrived in New York in early August for the Music Critics Association of North America meeting at Lincoln Center, the Mostly Mozart Festival was in full swing. At the end of the month, we were dipping into the free Charlie Parker Jazz Festival in Marcus Garvey Park, with the likes of Frank Wess and Gary Bartz, and the closing weekend of the FringeNYC theater festival -- 18 venues running over 200 shows in 17 days.

So even with the new baseball stadiums in the Bronx and Queens, I stuck with the culture beat in Manhattan. Let's lead off with theater this week and follow up next time with the music.

South Pacific (**** out of 4) -- We'll be getting the touring version of this Lincoln Center production at Belk Theater in November, very likely with the same exhilarating restoration of the original Richard Rodgers 30-player orchestration. But there's no way to fully replicate the experience of seeing this gem at the Vivian Beaumont's thrust stage, which recedes during the overture to reveal the musicians.

This is likely the best version of the best American musical because director Bartlett Sher deftly rehabilitates the Oscar Hammerstein book, boldly asserting that racism thrives in characters who are otherwise charming, heroic, or charismatic. These are darker, spot-on portraits of Navy nurse Nellie Forbush and Marine Lieutenant Joseph Cable, and though neither Laura Osnes nor Andrew Samonsky was a member of the original cast, their performances are definitive.

The other major roles are being held down by original cast members, including Tony Award winner Paulo Szot, still proving that an under-40 Emile de Becque can be rather compelling, while Danny Burstein gives the comical Luther Billis a sharper, more opportunistic edge. More fascinating is Loretta Ables Sayre's mercenary take on Bloody Mary and her frank pimping of her daughter.

As a result, the Lt. Cable tryst with the delicate Liat on Bali Ha'i no longer has the glow of an idyllic island honeymoon. Cable is a man at war, seizing an opportunity. Over and over, Sher's production emphasizes the premium that wartime places on acting quickly -- and closing a deal.

In the Heights (***3/4) -- If we are a nation of immigrants, then this pepperpot, developed by comedy hip-hop composer Lin-Manuel Miranda and playwright Quiara AlegrÌa Hudes at the Eugene O'Neill Theater Center, may be the most American musical you can see. It's the story of two families and their struggles to achieve their American dreams -- in business and in love. And it's the gritty story of the Washington Heights community, nestled near the majestic George Washington Bridge: the sprawling colors, the daunting squalor, and the desperate competition. All layered above a fierce ethnic pride and solidarity.

The faults in the piece are glaring. Plot twists, until the nifty ending, can be clumsily contrived or visible from afar. The lovingly detailed set by Anna Louizos forces indoor scenes to be staged outside the crumbling tenements. But take the five most explosive and emotional musicals you've ever seen and stack them high: They still won't reach the levels of energy and heart that pulse through In the Heights.

Miranda fuses the urgency of hip-hop with the brass of salsa to create his nuclear score. On the night we saw Heights, understudy Jon Rua was sensational as stop-and-shop owner Usnavi, the hip-hop soul of the neighborhood (and the role Miranda himself originally performed). Mandy Gonzalez is still the great hope -- and heart -- of the 'hood as Nina, the daughter of a businessman who comes back East after dropping out of Stanford.

Eleven days after seeing it, Heights is still tugging at my heartstrings.

Too Much Light Makes the Baby Go Blind (**)

Victoria and Frederick for President (***1/4)