The Avett Brothers catch a buzz 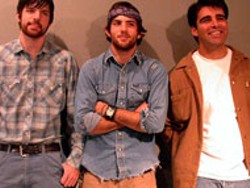 Some bands, after playing out for a while, begin to get something of a buzz going. "No kidding," you're probably saying. "I was just out at a show last night, and every one of them boys was putting back the brew!"

Achieving "buzz" isn't something you can really plan for, however. You can try your best, of course. You can tour relentlessly and get your music to the people. You can hire all the best promotional agencies and manager types. You can make radio appearances aplenty.

All of which matters diddly if the music doesn't reach people, doesn't grab them by the collar, whether blue or white, and alter them.

Reaching people is what The Avett Brothers do for a living. They don't have a choice in the matter, really. Brothers Scott and Seth Avett, along with bassist pal Bob Crawford, recently quit their jobs to focus on playing their stomp-happy, gloriously unhinged acoustic music full-time. If playing music is inevitable, the brothers thought, why not see if we can make an honest living out of it?

Homespun is an overused word, suggesting at the same time both pity and envy: "Aw, he's good country folk." "Well bless your heart!" Scott Avett, like the rest of the band, is a mess of seeming contradictions. Sure, they've dabbled in hobby farming, and prefer western shirts and old boots. However, both brothers are also the possessors of four-year degrees and uncanny business acumen.

It's that sort of combination that has brought the band sellout shows up and down the East Coast, a Merlefest invite (as well as a spot on the festival's new Fresh Faces CD), and more rabid fans than any local band in recent memory. Creative Loafing recently sat down for a chat with Scott Avett on the eve of their upcoming show at the Neighborhood Theatre, which will be videotaped and recorded for an upcoming live album, the aptly titled Live At The Neighborhood Theatre.

Creative Loafing: At what point did you decide to quit your day jobs and pursue music as a living?

Scott Avett: Since May, none of us have done anything except this. I think we decided that if we always had something else to lean on -- some sort of backup plan -- well, not only does it take time from our songwriting, but it leaves you an out. Nowadays, we have to depend upon the income we make from the band. We have to work. Which makes us spread the word farther and farther. It's a must now. With another job, it's not a must. With another job, you can go out and play on the weekend, and come back and work during the week. Now our work is writing songs, and the more we write, the more we have to work with. If we're not at home writing songs, we're traveling.

What's the reception been like in the more Northern states? You've hit a few of those places multiple times by now.

What we're finding is that the North has been really, really receptive. Northern Virginia, the DC area...New York City has been awesome. We've only gone up twice, but both times we've had packed houses. It's just a great thing. As for the South, that's a little different. (laughs) We've had a few run-ins with traditionalists, like in Louisville. They didn't approve of our music, and were pretty vocal about it -- not traditional enough. As soon as they see a banjo, they start assuming things. But we're not a bluegrass band! If anything, we're a rock band. At the Bluegrass Music Awards we had two direct run-ins with older fellows. One just told us we were flat-out pathetic. It stirred people up. We had a lot of real positive reaction, too. People told us they hadn't seen anybody do what we're doing.

Your shows do attract an audience that's hard to pigeonhole...

I think it comes down to the fact that it goes over well with lots of different types of people. It was a surprising thing, and probably a lucky thing. With Nemo (Seth and Scott's previous band), we didn't get a lot of clean-cut people...visually. (laughs) We're not really clean-cut people either, unless we're playing. We have clean-cut guys and not-so-clean-cut guys who like to listen to us in their cars, whether it be a BMW or a '67 Chevelle. It's great, because it's not condemned to either one. That's awesome. That feels really good. When we go to Athens, Ohio, it's a group of beatnik-type, grungy people, and when we go to a college town somewhere, it's fraternity kids. As long as they're enjoying it, I don't care what they do or wear, if they're good people.

It's all we can do. It's hard for an artist to be that way, to try and bring people into what you do, offstage. It's hard to promote yourself without looking silly or pretentious. If they think it's narcissistic or whatever that you give them a CD, hopefully that's overshadowed by the good they get out of the music. You hope that happens. That the art you give them is good enough that you don't come off as narcissistic. (laughs)

Speaking of which...I hear you guys have a PlayStation set up in your touring van?

Why in the world would someone tell you that? Why would that ever come up? (laughs) Yeah, sure, we do. This past week we were in the van for eight hours a day, five days straight. We read and we write and we talk, but sometimes you need a good distraction.

It's just a conversion van, though, and we don't use a trailer, so we're pretty stuffed up in there. I bought a TV that we just sat in there -- it's not installed or anything. (laughs) I wish!

The Avett Brothers, along with NYC's Langhorn Slim, will appear at the Neighborhood Theatre on Saturday, November 22. Seat-guaranteed tickets are $12; student & senior (65+) tickets are $10, show night only, ID required. Showtime is 8pm. Charge via phone 704-358-9298, or buy for cash only at the CD Warehouse (Kings Dr. location only) and Smelly Cat Coffeehouse (directly across the street from the Neighborhood Theatre).