Mexican restaurants are a family affair 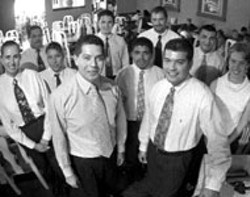 Owning and operating a restaurant is a 24/7 job notorious for taking a toll on the owner's family. But what happens when the owners are all part of the same family? Sergio, Ramon, Fernando, and Alfredo Gomez, four brothers, own both locations of Salsa's Mexican Restaurant. The newest location, located in the Galleria Village Shopping Center in southeast Charlotte, opened in May.

"When you're in a business," explained Alfredo Gomez, "you have to take care of the business. When our mother visits us she says that we don't spend enough time with her, that we are always so busy. But I believe that when you work hard, people are going to support you. The best thing we want to concentrate on is our customers."

Thus far the four brothers have divided the work between both restaurants. Sergio and Ramon run the first location in the Carmel Commons Shopping Center while Alfredo and Fernando opened the newest store.

Alfredo Gomez continues, "We (the four brothers) know where we come from, and we know we must work very hard in order to succeed."

The Gomez brothers are from Tampico, a Mexican city near the Texas border. They came to the US during the 1980s and first worked in restaurants in Tennessee and Georgia.

Located in this new shopping center, the brothers designed their restaurant to draw families. Salsa's is welcoming. Upbeat music and a baseball game emanated from the televisions around the dining room and bar. Vivid colors engage those who enter. The walls cut large swaths of orange, blue, yellow, and mint green. From the painted black exposed ductwork hang perches equipped with colorful parrots. A large fountain is located in the center of the room. The handmade tables and chairs were created for the restaurant by a Mexican furniture maker who normally does not make commercial furniture. However, he made an exception for the Gomez brothers.

Make no mistake though -- Salsa's does not attempt to replicate an authentic Mexican homecooked meal. This is by design. Alfredo Gomez says, "We have a mix. This is not Tex-Mex, but the food is meant to attract more Americans. Hispanic people cook in a different way. But we didn't want to go this style." And who can fault him for wanting to be a success? One of my favorite lines from the definitive restaurant movie Big Night was this paraphrased advice given the protagonist, "First you cook the food your customers want, then after you are a success, you cook the food you want to make."

Thus the menu, as conceived by the Gomez brothers, is a mix of standard dishes (chimichangas, enchiladas, burritos, fajitas) with a smattering of homemade tastes. In the kitchen are people from the Gomez brothers' region of Mexico.

The best entree was the steak fajita that emerged from the kitchen still sizzling from the grill. Fajitas are good for those who prefer the option of breaking off a piece of tortilla, scooping up some sauteed onions, green peppers, tomatoes and bite size slices of beef and rolling this into a mouthful size bite. Other dishes were laden with sauce. The El Presidente, one of the specialties of the house, is an avalanche of food. This combo plate -- actually two plates -- has a chalupa, soft taco, chile relleno, tamales and an earthy enchilada plus a hefty portion of refried beans and a scoop of rice. The best flavors though were the contrast between the tomato sauce, the corn tortillas and the raucous guacamole. The breaded chile, on the other hand, was curiously tepid.

The brother's rendition of the complimentary salsas, brought with a flourish to the table with a basket of chips, are a fresh snap. One has a bite while the other is a pleasant blend of tomatoes, spices and cilantro. The sauteed spinach, cheese and white mushroom quesadilla, served on a plate-sized flour tortilla, was bland even when ambushed with a spoonful of pico de gallo.

Not that any of these issues seemed to faze anyone dining at Salsa's. On the contrary, the place was packed with singles in the bar area and families in the dining area. Kids are made to feel welcome. A menu with a crayon taped to it is also a game sheet.

There are few surprises buried deep in Salsa's overstuffed menu. Occasionally the menu reports the recipe is that of "Mama Carmela," such as the Tamales Toreados. Salsa also offers vegetarian selections, a quarter pound burger, and taco salads.

Desserts are for those with a sweet tooth. Fried tortillas are drenched in a pool of honey and melting vanilla ice cream. Others may prefer the empanadas stuffed with strawberries and served with vanilla ice cream or the flan. Children at neighboring tables dived into banana splits.

The Gomez brothers' congenial attentiveness is what makes their restaurant work. Diners are made to feel welcomed which, oddly enough, I don't find everywhere.

Tasty Tidbits Bistro 100 is hosting the annual Fete Nationale for Bastille Day, July 14, although the special menu is available through July 14. On the menu are Grilled Quail over corn pudding with a balsamic vinaigrette, Pan-seared Foie Gras with a blueberry compote, Wood-oven Seared Lamb Rib-eye, Black Grouper and fresh Figs in Papillote, and Lavender Creme Brulee. Prix-fixe and a la carte. For information, call 704-344-0515.

Do you have a restaurant tip, compliment, or complaint? Do you know of a restaurant which has opened, closed, or should be reviewed? Does your restaurant or shop have news, menu changes, new additions to staff or building, upcoming cuisine or wine events? You can fax this information, at least 12 days in advance of event date, to Tasty Tidbits: 704-944-3605, or leave voice mail: 704-522-8334, ext. 136.