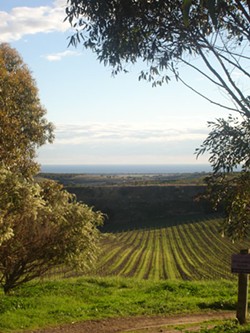 To understand Australia, you need to inhale it. The air is so crisp and clear that you can smell the oil scent from the eucalyptus (gum) trees and also the salt from the earth. At night this clarity allows the Milky Way to arc across the center of the sky of the southern hemisphere, right above the Southern Cross.

It's a place so old that the ocean is still evaporating from the interior desert in a series of thousands of salt lakes (which produces pink salt), yet so new that Aussies are buzzing about the road being finished to Darwin, the port city in the Northern Terrority -- which, in US terms, would be like finally connecting Houston to the rest of the nation.

Australia's ocean waters are so clean that the oysters taste unlike other oysters you've ever had. Coffin Bay in South Australia is reputed to have the cleanest ocean waters on the planet and produces succulent and intensely flavored oysters.

This is a country that has grape vines more than 150 years old. Australia is one of the only countries in the world to be relatively free of phylloxera, that nasty sap-sucking insect that destroyed vineyards from California to Bordeaux. What does this mean? While the Europeans and Americans had to replace all their old grape vines with a resistant root, the Australian vines kept growing and producing. At Kalleske, an organic vineyard in the Barossa, some of their vines date back to the 1800's. In fact, its opulent Johann Georg shiraz is made from a dry-grown vineyard planted in 1875 while its Old Vine grenache is from a small dry-grown vineyard planted in 1935.

Some of the oldest vines in Australia are known as bush vines because they are not trellised. These vines, like wizened hands, stretch out of the red-toned earth. Recently, more wineries are trellising these bush vines because of the cost-savings of the mechanical pickers.

The last 10 percent is made up by Australia's other 1,700 producers. Many of these produce the boutique wines that many Americans, including me, prefer.

The main challenge to Australia's winemakers is high alcohol content. Sunshine (which is abundant in Australia) increases sugar in grapes, which is then fermented into more alcohol. The trick is to balance the hang time needed for flavor and to prevent too much sugar from occurring within the grape.

A second challenge is terrior -- establishing a taste of place. Many winemakers, especially the largest companies, blend grapes from different vineyards, even different regions. However, some wineries deliver that sense of place. Colin Kay, winemaker and owner of Kay Brothers in McLaren Vale, said that people always ask him about the soil in his famed Block 6 shiraz. He noted that he has four distinct soil types in that one area, since the glacier that formed the valley dropped various sentiments as it settled. Kay finds this an asset since he can use grapes from across his property to achieve the taste he desires. (Note: the enormous wooden vats used at Kay Brothers are made from giant California Sequoias circa 1901.)

But as is true for all wineries, the true heart is not just place, but the style of the winemaker. Many Aussie winemakers, such as the highly acclaimed Kim Johnston of Shirvington and Henry's Drive and the brilliant Justin McNamee of Samuel's Gorge, have gone through the oenology curriculum at the Roseworthy campus of the University of Adelaide, the UC-Davis of Australia. Others have apprenticed with the legendary Robert O'Callaghan of Rockford Wines. His Barossa wines are renowned for their quality and tradition. Most of the best Australian boutique winemakers have done a stint at Rockford. With O'Callaghan is renowned winemaker Chris Ringland, who additionally has his own labels.

Some Americans assume shiraz (in Aussie, it rhymes with pizzazz) is the major player of Australia. But then you discover Burge Family Winemakers Olive Hill sémillon, or old vine grenache (pronounced "gren ash"). Australian winemakers have a knack for blending varietals. Noon Winery's legendary Eclipse is a blend of grenache and shiraz. Semillon/sauvignon is a common white blend while the red/white shiraz and viognier combo has been used more recently.

But this is Australia and there are charming endearments: In some smaller vineyards, sheep are used to keep the weeds low between the vines (alpacas are used to monitor the sheep). At larger vineyards, such as the 900-acre vineyard at David Hickinbotham's Paringa, kangaroos chow down on the weeds. On Kangaroo Island, off the southern coast of Australia, surrounded by great white sharks and having a population of 9000 koalas and 4000 humans, the Cape d'Estaing winery uses electric fences and netting to keep marsupials and birds, like the glossy black cockatoos, out of the vineyards. They keep out of their vineyards the same animals and birds American zoos would give anything to have.

This is also Australia with its degrees of earthy realness. No pseudo upscale la-dee-dah wine snobbery here. To give you the impression, just imagine speeding through the bush of the Coonawarra at night in an Ut (truck) driven one handed by Tony Lynn, owner of Majella (in the other hand a beer), to spotlight (just illuminate, not harm) kangaroos. But ultimately, the lights were turned out and we watched shooting stars fly though the Milky Way. You just have to breathe it in.