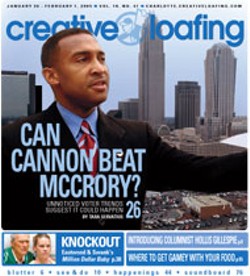 It's the biggest untold political story in Charlotte, and until last week, Charlotte Mayor Pro Tem Patrick Cannon was probably the only one who fully grasped its implications - or even noticed it at all.

That is, until Creative Loafing began showing a Charlotte voter registration spreadsheet to the city's political strategists. The county Board of Elections tracks voter data largely by county, of course, and the city of Charlotte contains a confusing tangle of shifting precincts split between the city and the county. Because of that, what had happened over the last decade was hard to track and went largely unnoticed by both Democratic and Republican campaign managers and strategists.

Their reactions to the spreadsheet included gasps, a few "wows" and "can I have a copy of that?"

What drew their attention wasn't the ratio of Democrats to Republicans, which has stayed largely the same over the past decade, but the columns that contained white and black voter registration numbers.

Just a decade ago, African-Americans made up a quarter of Charlotte's electorate. Now they make up a third. To political number crunchers, these numbers are huge. So is the trend; if it continues, in a little over a decade, the city will be close to evenly divided between white and minority voters. And with each year that passes, it will become harder and harder for Republicans to win the mayor's race and citywide offices.

At the moment, no one is better equipped to take advantage of this trend than Cannon, the city's highest-ranking African-American politician. With numbers like these, the question for Cannon isn't if he'll run for mayor, but when. And the more he thinks about it, the more attractive the mayor's race this fall looks.

"I would say from all the support that seems to be coming our way, I'm somewhat inclined to make a move to run for the mayor's office," says Cannon. Nothing definite, obviously, but his campaign will announce its final decision in the coming weeks.

Because black voters typically show up to vote in much smaller numbers than their white counterparts in non-presidential elections, it wasn't until fall of 2004 that the full power of the new black electorate in Charlotte reverberated up and down the ballot. Until November, the city and county's moderate white voters usually split their tickets between the parties, producing a ballot of winners from both parties. This time, Democrats in competitive county and statewide races swept every office they sought. Democrats won all three at-large seats on the County Commission and John Kerry won the county as well.

The new bottom line in Charlotte is that when black voters show up in full force at the polls, adding their votes to those of white Democrats who sometimes split their tickets, they decide who wins. And because black voters are so overwhelmingly Democratic, it means that Democrats win.

Can Dems repeat their Fall '04 success?
If Patrick Cannon runs, winning won't be easy. Sure, Cannon is young, successful, attractive and popular with voters of both races, but he has also never done better than second in the four-way at-large race for City Council, although Republican Pat Mumford, the first place winner in 2003, only beat Cannon by two votes.

Meanwhile Pat McCrory, a Republican who has held the office for a record-breaking five terms, has nearly $200,000 sitting in a campaign account, can raise more money easily and is better known than Cannon.

Just five years ago, a mayoral challenge by Cannon against a popular Republican like McCrory would have been unthinkable. Though even Cannon admits that it would be tough to beat McCrory, the city's changing racial reality places it in the realm of the possible. And it's not just Democrats who say so.

Even McCrory's longtime campaign manager, Victoria Smith, whose initial response to the statistics above was "Wow," acknowledges that even though she's certain McCrory would beat Cannon if the two ran this fall, things here are changing.

"What's so great about Pat McCrory over these last five elections is that he does cross over and get bipartisan support, but I don't know," Smith said. "It is getting harder and I think, if anything, it is quite justified for Pat (McCrory) to run again given what happened with the County Commission. We need to keep a Republican mayor in this town."