She's more on her own than ever 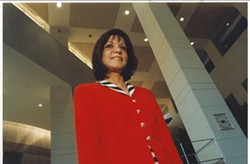 When she was at the height of her power, former City Council member Lynn Wheeler's campaign committee met at the Bank of America building. Executives and other influential people dialed for dollars and backed Wheeler's fundraisers, and the campaign contributions rolled in.

After her perennial first place finish in the four-person at-large race, Wheeler would get down to business, pulling votes together for everything from sports arenas to city budgets, a talent that arguably made her the council's biggest power broker.

It went on like that, term after term, until a thousand conservative Republicans took their arena-related angst out on Wheeler in a fluky, low-turnout Republican primary. She finished fifth in a race for four slots.

Two years after her stunning fall, Wheeler is trying to get it all back. But this time, say some on the political scene, it appears she's on her own -- or at least more so than she's ever been. Bank of America executive Jim Palermo, the last of her big backers at the bank, has retired. The new generation of bank executives isn't as interested in dabbling in local political races.

Until Wheeler proves she can win again in November, say insiders, it won't be as easy to get money from the big wigs who shovel dollars at candidates who haven't suffered a recent, devastating loss.

Meanwhile, Wachovia execs -- in particular Wachovia CEO Ken Thompson -- have been publicly grooming Republican at-large council member Pat Mumford for the mayor's office, which Wheeler once coveted. With Thompson as Mumford's campaign co-chair, the candidate, who also works for Wachovia, came in first in the 2003 at-large race. Mumford is the only council member who now has the kind of bank support Wheeler used to have, political insiders say.

"Ken Thompson has his own water boy now, and you can't have two water boys," said one Republican activist.

After carrying water for years for the uptown crowd and slaving away on virtually every pet project of theirs from the trolley to the arena, Wheeler seems to have found herself on the outs, at least for the moment.

Politicos from both sides of the aisle have been speculating about her campaign report, which more than one campaign worker has slunk down to the board of elections and studied.

Wheeler, who typically raises and spends well over $100,000 on council races, still has $70,000 left from her last campaign. But so far, she hasn't reported raising any new money for the race, a fact that rocketed through political circles last week.

"That was the first red flag for me," said one Republican political operative.

Wheeler says she hasn't raised money because after the death of her mother in May, she wasn't sure if she planned to run and she filed for office late. Wheeler says she raised $16,000 in a fundraiser held last week, after the reporting period, and hopes to rake in $14,000 more in another fundraiser this week.

For the record, Wheeler says, she only held one campaign meeting at Bank of America. It felt awkward, so the group moved its meetings to Wheeler's den. What's more, she said, any of her past campaign donors -- while typically well-known players -- weren't directly associated with the bank.

When asked point-blank if those long-term financial supporters were still backing her, Wheeler said she couldn't comment at this point and wouldn't be able to comment on it for another month.

After her defeat in 2003, Wheeler renounced the arena, light rail and uptown booster projects in general -- uptown has all it needs, she says -- and demanded the city get back to basics. All were stances that would have helped her get conservative Republicans off her back in the Republican primary. Then, as luck would have it, there was no Republican primary, because one candidate dropped out after his white supremacist leanings came to light. By then, it was too late. Wheeler had already staked herself out on the right.

"One of her problems is that by now saying that she thinks the arena was a mistake, the very people who contributed to her in the past because she did support those things won't give," said UNCC professor Ted Arrington, a sometime political confidant of Wheeler's. "She's probably dependant on the money she already has."

All of which has people on both sides of the aisle wondering whether Wheeler can win her old seat back. Will the moderate Democrat and Republican voters she's always been popular with forgive her for flip-flopping? Will Republicans buy her repentance?

Democrat campaign consultant Dan McCorkle thinks Wheeler's flip-flopping has done irreparable damage to her public image, and he calls her a "joke." Kevin Geddings, a Democratic pollster and consultant, says the whole Republican slate for City Council could prove to be formidable because all four candidates, including Wheeler, have high name recognition with Charlotte voters. Republican campaign consultant Brian Francis says that to win, Wheeler will have to find a way to define herself.

"There are a number of other candidates in this race who have very clear records over the last two years on where they stand," said Francis.

Susan Russell, Wheeler's former campaign manager, thinks Wheeler could turn her image around with a good campaign. "She should be able, because of her background with people, to turn it around and come in third," said Russell.