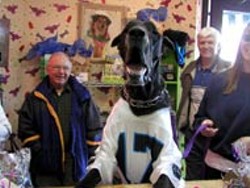 No matter how many cats they chase, rugs they soil or crotches they sniff, we'll always love our dogs. With their unconditional affection and indefatigable "Yahoo, You're Home!" enthusiasm, it's impossible not to develop a real, heartfelt bond with our canine buddies. Lucky for us, Charlotte has plenty of doggie-friendly services for owners and pets, including several parks, a gourmet café, and a self-serve dog spa. For a lot of pet owners, these kinds of activities serve as social mixers and a chance, particularly for newcomers, to meet fellow dog lovers. First, before you take your dog on a romp at one of Charlotte's dog parks, you may want to take him or her to Barbara's Canine Café in Pineville. For seven years now, Barbara's Canine Café has been serving wholesome, all-natural dog treats including biscuits, cakes, muffins, and pizza, all baked on-site. "We serve everything you can imagine, and some things you probably can't," said Meredith Greer, who co-owns the doggie café with founder Barbara Burg.

In addition to offering a variety of treats, the café schedules regular parties throughout the year, including "Howl-oween," "Mardi Paw" and the "Santa Paw Soiree." Proceeds from the parties help fund Project Halo, an animal rescue group. Every Saturday between 12 and 2 is "Yappy Hour," where they serve complimentary cakes and doggie daiquiris. "It's a cool place for people to come with their dogs and socialize," says Greer.

After a good meal (well, at least for the dog), you and Fido can head to one of Charlotte's dog parks. They're all fenced-in "off-leash" facilities, and have become an increasingly popular place to socialize. According to Mike Cozza, public information coordinator for Mecklenburg Parks and Recreation, about 1,800 people have purchased annual pooch passes to use the dog parks. "Dog parks draw a lot of people on sunny weekend afternoons," Cozza says. "I'd bet that many romances for both species sometimes start in dog parks." Indeed, nothing works quite like a dog as a chick magnet. Dudes who ordinarily repulse the ladies can usually at least get a conversation going with the fairer sex when they're in the company of a cute, scruffy dog. And vice versa, of course.

There are three dog parks in Charlotte. Swaney Pointe K-9 Park at Ramsey Creek Park in Cornelius is a three-acre facility with two separate fenced-in areas, one for large dogs and another for small ones. Near the University Area sits the four-acre Barkingham Park at Reedy Creek Park, and finally there's Ray's Fetching Meadow at McAlpine Creek Park on Monroe Road. Ray's Fetching Meadow will be the site of this weekend's "Bark in the Park" festival, where hundreds of dog lovers and their furry friends are expected to attend. The festival will feature contests like Best Dog Trick, Best Tail Wag, Best Pet/Owner Look Alike, and the Top Dog Photo Contest, the winner of which will receive a commissioned portrait by local artist Mark Durham and act as grand marshal of the Pooch Parade.

Finally, after a day of frolicking in the park and countless bouts of spirited crotch and butt sniffing — the dog, not you, at least let's hope — your pooch may need a bath. In that case, head over to Bark Street on Park Road, which offers self-serve dog wash stations and supplies everything needed to wash and dry your dog. There's no appointment needed, no clean-up, and no time limit. They also offer full-service pet styling, as well as massages, tooth brushing and exfoliating skin treatments.

Doggie Trivia: The phrase "Dog Days" is usually used to describe the period between early July and early September when the weather is particularly hot and sultry. Wanna know where the term originated? It turns out the ancient Romans noticed that the hottest days of the year coincided with the Dog Star (aka Sirius, aka The Great Dog) being in the same part of the sky as the Sun. They thought the star contributed to the heat of the day, hence "Dog Days."

Barbara's Canine Café is moving in June to 1447 South Tryon Street in the SouthEnd area.

The Harris Teeter/Purina "Bark in the Park" dog festival is April 9 at Ray's Fetching Meadow in McAlpine Creek Park, 8711 Monroe Road. The festival runs from 10am-4pm. It's free to the public and to pooches with proof of current vaccination. Proceeds help fund more off-leash dog parks. Details available at www.parkndrec.com. "Pooch Passes" for Mecklenburg County dog parks are $35/year for Mecklenburg residents and $50/year for non-residents. For more information, go to www.parkandrec.com and hit "dog parks."

If you have an idea for the Urban Explorer column, please send it to: sam.boykin@cln.com.