Plus, the Charlotte Film Society 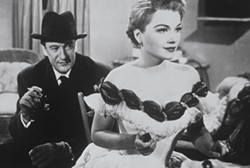 ALL ABOUT EVE The Charlotte Film Society graciously wraps up its winter/spring program with screenings of my all-time favorite motion picture. All About Eve (1950) is writer-director Joseph L. Mankiewicz's masterpiece set in the world of theater, with ingenue Eve Harrington (Anne Baxter) attempting to professionally and personally snatch the spotlight from established (and aging) star Margo Channing (Bette Davis). Among its many attributes, this features Davis' career-best performance ("Fasten your seat belts, it's going to be a bumpy night!"), a knockout script packed with astounding (and often hilarious) dialogue, an early role for Marilyn Monroe, and George Sanders' indelible turn as cynical critic Addison DeWitt. Nominated for a still-record 14 Academy Awards (since tied by Titanic), this nabbed six statues, including Best Picture, Best Supporting Actor for Sanders, and Best Director and Best Adapted Screenplay for Mankiewicz. Only a death in the family qualifies as a reasonable excuse to miss this one while it's in town. (All About Eve will be shown at 4 p.m. and 7 p.m. Friday, May 9, through Monday, May 12, at Park Terrace Cinemas. For more information, go to www.charlottefilmsociety.org.) ****

BABY MAMA With Will Ferrell, Adam Sandler and other comedians routinely hoarding the screens in our nation's multiplexes, here come Tina Fey and Amy Poehler to remind audiences that girls just want to have fun. Indeed, the Cyndi Lauper hit of that name is granted its own karaoke-set scene, and its inclusion is fitting in a movie that's similarly pointed, joyous, and light on its feet. This stars Fey as Kate Holbrook, a successful businesswoman who, upon finding out that she only has a one-in-a-million chance of getting pregnant, turns to an agency to provide her with a surrogate mom; she ends up getting Angie Ostrowiski (Poehler), who clearly resides several rungs down the social ladder. The plot complications arrive with clockwork precision, and it's this rigid formula (along with a ludicrous happy ending) that prevents a fine movie from being even better. Yet judging it strictly on its comic merit, Baby Mama delivers (pun not intended, I assure you). Scripter Michael McCullers (who also directed) serves up several killer quips guaranteed to remain among the year's freshest, and the two perfectly cast leading ladies are backed by an engaging mix of emerging talents. Yet it's the old pros who really shine: Sigourney Weaver is suitably smug as the head of the surrogate center, gamely being shellacked by some of the script's best zingers, while Steven Martin is perfect as the owner of an organic health food chain. Martin's ponytailed character is a real piece of P.C. work, and with this portrayal, the actor emerges as Baby Mama's mack daddy. ***

88 MINUTES 88 Minutes actually runs 108 minutes, a cruel trick to play on moviegoers who check their watches at the 80-minute mark and erroneously believe they're on the verge of being set free. A film so moldy that it was released on DVD in some countries as far back as February 2007, this risible thriller stars Al Pacino as Dr. Jack Gramm, a college professor and forensic psychiatrist whose expertise has helped the FBI in nailing down serial killers. One such murderer is Jon Forster (Neal McDonough), whose claim of innocence – even on the day of his execution – is taken seriously once a new rash of similarly styled killings begins. But are these murders the work of a copycat? Is Forster innocent, and the real killer has never been caught? Is he masterminding the proceedings from his front-row seat on Death Row, with an accomplice on the outside doing his dirty deeds? Or is it possible that the killer is Gramm himself? Director Jon Avnet tries to ratchet up the suspense by presenting every character, right down to bit players, as the possible assassin, but it's an approach that only garners laughs. It's usually fun when a murder-mystery offers several suspects, but this goes beyond serving up some red herrings; here, we get trout, tilapia and mahi mahi as well. Scripter Gary Scott Thompson wrote The Fast and the Furious, so that probably explains why Gramm spends a good amount of time driving a taxi (don't ask) across the city looking for clues. But Thompson also wrote the straight-to-DVD sequels to K-9 – K-911 and K-9: P.I. – so he's also quite familiar with dogs. Rest assured, 88 Minutes joins the pack of movie mongrels. *1/2

FLAWLESS At a time when banks are being bailed out by Bush's "for rich people only" government while ordinary citizens are left to flounder, perhaps it's possible to employ the current string of heist flicks as a mildly cathartic tonic. On the heels of Mad Money, The Bank Job and 21 comes Flawless, in which a pair of hard workers team up to rip off the evil diamond company that takes their services for granted. Set in 1960 London, this stars Demi Moore as Laura Quinn, an executive who's repeatedly overlooked when it comes time to promote from within. Despite years of dedicated service (and more than her share of innovative ideas), Laura learns from Mr. Hobbs (Michael Caine), the company janitor whose lowly status allows him access to valuable info, that she's about to be fired. Appealing to her anger, Hobbs asks Laura to assist him in what he deems a foolproof robbery; she accepts, only to discover the scheme is more elaborate than she imagined. For the first hour, the film plays as we'd expect – the planning of the heist, the handling of unexpected complications and the job itself. This part is entertaining enough, further fueled by the subtext of watching this ambitious woman try to compete in an all-male world determined to shut her out. But the movie really takes off during its second half, and even some lapses in logic can't overtake the satisfying twists. The modern-day framing device is worthless – it opens with Moore in terrible old-age makeup and ends with a heavy-handed "Carpe Diem" cheer – but the period pic between these bookends is, if not worth its weight in gold (or diamonds), at least worth the price of a movie ticket. ***