Capsule reviews of films playing the week of Dec. 14 | Film Clips | Creative Loafing Charlotte
Switch to the mobile version of this page.

Capsule reviews of films playing the week of Dec. 14 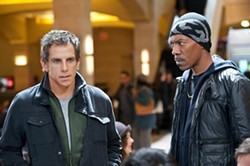 ANONYMOUS Call it the anti-Shakespeare in Love. Call it the more cultured cousin to Inglourious Basterds. Just don't call Anonymous a fact-based story. There have been many speculations advanced that William Shakespeare actually did not write the countless classic works attributed to him, but the conspiracy theorists can't quite agree on the true identity of the genius behind such works as Hamlet and Macbeth. Among the suspects are Christopher Marlowe, Francis Bacon and Stephen King (well, OK, maybe not), but perhaps the most popular alternative is Edward de Vere, the Earl of Oxford. Anonymous, directed by disaster-flick specialist Roland Emmerich (2012) and written by John Orloff, takes that ball and sprints with it. In this picture, the Earl (Rhys Ifans) yearns to take pen to paper, but his high standing prevents him from doing so. He asks accomplished playwright Ben Jonson (Sebastian Armesto) to front for him, but when Jonson balks, an obnoxious and illiterate actor named William Shakespeare (Rafe Spall) jumps at the chance to take credit. More than simply focusing on these writers guild disputes, Anonymous also moves through the years to chart court intrigues, particularly the Earl's dealings with a lusty Queen Elizabeth who seemingly has more (illegitimate) children than Kate Gosselin and Octomom put together (Joely Richardson plays the young queen while her real-life mother Vanessa Redgrave plays the elderly Elizabeth). Lively in most spots, draggy in others, Anonymous seeks to make a name for itself with its controversial stance but will most likely end up getting buried in a pauper's grave by the season's more high-profile titles. **1/2

ARTHUR CHRISTMAS Folks who worship at the altar of Aardman Animations as much as they do at the temple of Pixar (raising my hand here) will quickly realize — say, 20 minutes into the movie — that Arthur Christmas won't come close to matching the giddy heights of the British studio's Chicken Run or Wallace & Gromit films. Its characters are more commonplace, its plotline is more conventional, its sentiments are more predictable. What this means, though, is that instead of blazing its own path, the film instead manages to beat the other studios' efforts at their own game, effortlessly rising above the filmic fray involving Gnomeo & Juliet, Puss in Boots and other 2011 'toon disappointments. Most of the major laughs come toward the beginning of this clever contraption in which the present Santa Claus (voiced by Jim Broadbent) might finally be ready to retire, set to pass along the reindeer reins to his technically savvy son Steve (Hugh Laurie). The doddering Santa doesn't even consider his other son Arthur (James McAvoy) for the position, since the gangly youth is obviously too clumsy and awkward for such a responsibility. Yet when a wayward present means that a little girl in Cornwall won't be receiving a gift this year, it's Arthur, not his dad or sibling, who does everything in his power to insure that she receives the present. The idea of a Santa with a non-American accent will probably irk the same stateside folks who bristle at the thought of a non-Caucasian Jesus, but the mostly British cast has been carefully selected, with an unusually animated (in both senses of the word) Bill Nighy especially enjoying himself as the long-retired Grandsanta. There are sharp sight gags galore — I especially like the handheld device that gauges a child's naughty-or-nice ratio and fills the stocking accordingly — and while this all leads to a predestined ending, at least said conclusion goes down as smoothly as marshmallow-endowed hot chocolate on Christmas Eve. ***