Capsule reviews of films playing the week of Oct. 7 | Film Clips | Creative Loafing Charlotte
Switch to the mobile version of this page.

Capsule reviews of films playing the week of Oct. 7 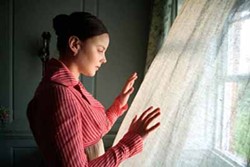 BRIGHT STAR Commencing in 1818 London, the story of Bright Star, with its key events based in fact but its smaller ones colored in by writer-director Jane Campion's poetic license, takes place over the course of a couple of years, as the forward and fashion-conscious Fanny (Abbie Cornish) makes the acquaintance of two English poets trying to build names for themselves. One is Charles Brown (Asheville native Paul Schneider), who views Fanny as no more than a bubble-headed flirt and frequently engages her in vicious verbal combat (she holds her own quite nicely, thank you). The other is John Keats (Ben Whishaw), who's initially preoccupied with tending to his dying brother but in time falls for the lovely Fanny. She's equally smitten, but since he's penniless and since the women of the day were expected to set their sights on men with money, their love seems doomed – even before he develops that bothersome cough. Bringing the creative process to life on screen is always an uphill battle – how does one turn thoughts into something tangible? – but Campion uses the characters' dialogue to provide reasonably sturdy stepping stones into often abstract territory. Fanny's strong desire to learn about poetry – to understand it, to appreciate it – stirs our own interest (perhaps buried since college!), and Keats responds with an absolutely lovely speech comparing poetry to a dive in the lake. A similar respect for the craft remains on view throughout the picture, thereby never reducing the art to a mere plot device but rather constantly working it into the very fabric of the film. Campion has made several films over the past 16 years, but all have been disappointments in the wake of her 1993 masterpiece The Piano. Bright Star isn't in the same ballpark as The Piano – heck, it's not even in the same time zone – but it's the first Campion movie since then to warrant 10 Best consideration. It's that special. ***1/2

CLOUDY WITH A CHANCE OF MEATBALLS Although it's based on a children's book (by Judi and Ron Barrett), this animated charmer is one of those equal-opportunity exercises that provides as much merriment for adults as for kids. After all, it's the grownups who are sure to get a chuckle out of a voice cast diverse enough to include Bruce Campbell, James Caan and Mr. T, and it's the grownups who will pick up on the movie's gentle ecological themes. As for the rest, the adults will feel like kids when bombarded by the film's freewheeling innovations and bright color schemes – all made even more irresistible in 3-D. The film's central character is Flint Lockwood (Bill Hader), a gangly inventor whose latest contraption – a device that turns water into food – seems to be a winner. After its unceremonious launch into the heavens, the machine pours down all sorts of cuisine – hamburgers, pancakes, pasta, you name it – on a regular basis. Flint becomes the town's savior, but stormy weather lies ahead. The visual design of Cloudy is wondrous: There's something inherently amusing in seeing a castle built out of gelatin or a street lined with ice cream rather than snow, and the movie repeatedly offers up these gastronomical delights. Yet underlying the frivolity is a warning about our nation's gluttonous and wasteful ways, a message certainly to be lost on children (who'll wish they had their own candy-dispensing machine hovering above their homes) but relevant to environmentally aware adults. Cloudy with a Chance of Meatballs is an entertaining ride, but it doesn't possess the lasting power of, say, this summer's Up or any of the other top-tier animated features that stick with us for the long haul. It's more comfortable in the company of Kung Fu Panda and Monster House: Like those worthy animated features, this one shows up, gets the job done, and leaves us feeling satisfactorily full. ***