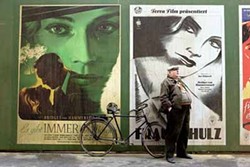 TRANSFORMERS: REVENGE OF THE FALLEN To my surprise, I somewhat dug 2007's Transformers, crediting the input of executive producer Steven Spielberg, who was described in the press notes as a "hands-on producer." Well, Spielberg must have been on an extended vacation during the making of this perfectly dreadful sequel that's the filmic equivalent of a 150-minute waterboarding session. As before, two warring factions of intergalactic robots – the noble Autobots and the evil Decepticons – are waging their battle on our planet, with youngsters Sam (Shia LaBeouf) and Mikaela (Megan Fox) offering their support to the good 'bots. Yet while the running time is almost identical to that of its predecessor, the priorities have been shifted. The slugfests between the Autobots and the Decepticons – the dullest portions of the first flick – have been elongated, and by including more fights and more explosions and more military hardware (Bay must fantasize about fondling missiles the way teenage boys fantasize about fondling Fox), that leaves less room for any meaningful human interaction. Then again, given that most of the characters are rather insufferable this time around, maybe the less seen of them, the better. Unfortunately, the Transformers themselves are no more interesting, with the most offensive being two "black" Transformers who sport buck teeth (one gold), admit to not being able to read, and cuss a lot. Forget Jar Jar Binks, who comes across like Paul Robeson when compared to these stooges: You'd have to go back to the days of Stepin Fetchit and Sleep 'n' Eat (nee Willie Best) to find such a jolting comparison. Bay doesn't believe in stooping too low, so he also treats us to not one but two shots of dogs screwing, as well as a mini-Transformer humping Mikaela's leg, a Transformer with flatulence problems and a close-up of John Turturro's thong-clad buttocks. And did I mention the swinging metallic testicles on one of the Decepticons? That last-named bit of idiocy thus allows me to segue into my own phallic quip: This movie sucks. *

THE UGLY TRUTH Look, it's only fair. If impressionable frat boys can enjoy The Hangover this summer and impressionable teenagers can enjoy Transformers: Revenge of the Fallen, then why not give impressionable women their own imbecillic film? An abhorrent romantic comedy, The Ugly Truth is so inept and ill-conceived on so many levels that mandatory sterilization seems to be the only punishment suitable for everyone involved in this mess. We wouldn't want these folks breeding like rabbits. In a typically bad performance consisting primarily of exaggerated reaction shots, Katherine Heigl (also serving as executive producer) plays Abby, a TV news producer who's also a frigid control freak loved only by her cat. Into her world enters Mike (Gerard Butler), a chauvinist whose cable access show (The Ugly Truth) gets absorbed into Abby's news program in an effort to boost ratings. Mike's segment, in which he claims that men can't be taught anything once they pass toilet training and that there's no such thing as a romantic male, offends Abby, but eventually she finds herself turning to Mike for help on how to land her hottie neighbor, Colin (Eric Winter). He's only too happy to assist her, until he begins to fall for this pill himself. It's inconceivable that a movie with such an unsympathetic female lead was written by three women. The male characters don't come off much better, but they do come off better. While Abby is painted as a repugnant caricature to her very core, Mike is revealed to only be a misogynist when the script calls for it; the rest of the time, he's nursing a broken heart caused by past relationships or lovingly hanging out with his sister and his nephew. Ignore this in favor of (500) Days of Summer, a romantic comedy that's as smart, perceptive and charming as this one is stupid, clueless and, well, ugly. *

UP Pixar's Up proves to be merely one more winner for an outfit that refuses to compromise its high level of quality, to say nothing of its artistic integrity. It tells the story of Carl Fredricksen (voiced by Ed Asner), a 78-year-old balloon salesman who, after the passing of his beloved wife, decides to hook his house to thousands of helium-filled balloons and drift off to an uninhabited part of South America. The launch goes smoothly enough, until he discovers that he has an unwanted passenger in the form of 8-year-old Wilderness Explorer member Russell (Jordan Nagai), whose boundless energy wears out the curmudgeonly Carl. Nevertheless, the senior citizen pushes upward and onward, only to encounter a plethora of unexpected developments once they reach their destination. In addition to providing the requisite thrills (those afraid of heights will tense up during the exhilarating climax), Up is as emotionally involving as we've come to expect from our Pixar pics, with themes of longing, loneliness and self-sacrifice coursing through its running time. In fact, its PG rating alone hints that this is one of those toon tales that will resonate more powerfully with adults than with kids, and never more so than in the early sequences between Carl and his wife Ellie (did we really just witness a miscarriage in an animated film?). Of course, this wouldn't be a family film without some colorful sidekicks to provide added entertainment value, and the picture provides one keeper in Dug, a happy-go-lucky dog who, along with several other (fiercer) canines, has been equipped with a device that allows him to speak (he's voiced by co-director Bob Peterson). Thus, here's a movie that ultimately goes to the dogs – literally – and it still deserves enthusiastic thumbs up. ***1/2