Capsule reviews of films playing the week of Sept. 30 | Film Clips | Creative Loafing Charlotte
Switch to the mobile version of this page.

Capsule reviews of films playing the week of Sept. 30 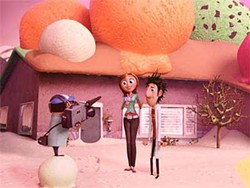 CLOUDY WITH A CHANCE OF MEATBALLS Although it's based on a children's book (by Judi and Ron Barrett), this animated charmer is one of those equal-opportunity exercises that provides as much merriment for adults as for kids. After all, it's the grownups who are sure to get a chuckle out of a voice cast diverse enough to include Bruce Campbell, James Caan and Mr. T, and it's the grownups who will pick up on the movie's gentle ecological themes. As for the rest, the adults will feel like kids when bombarded by the film's freewheeling innovations and bright color schemes – all made even more irresistible in 3-D. The film's central character is Flint Lockwood (Bill Hader), a gangly inventor whose latest contraption – a device that turns water into food – seems to be a winner. After its unceremonious launch into the heavens, the machine pours down all sorts of cuisine – hamburgers, pancakes, pasta, you name it – on a regular basis. Flint becomes the town's savior, but stormy weather lies ahead. The visual design of Cloudy is wondrous: There's something inherently amusing in seeing a castle built out of gelatin or a street lined with ice cream rather than snow, and the movie repeatedly offers up these gastronomical delights. Yet underlying the frivolity is a warning about our nation's gluttonous and wasteful ways, a message certainly to be lost on children (who'll wish they had their own candy-dispensing machine hovering above their homes) but relevant to environmentally aware adults. Cloudy with a Chance of Meatballs is an entertaining ride, but it doesn't possess the lasting power of, say, this summer's Up or any of the other top-tier animated features that stick with us for the long haul. It's more comfortable in the company of Kung Fu Panda and Monster House: Like those worthy animated features, this one shows up, gets the job done, and leaves us feeling satisfactorily full. ***

(500) DAYS OF SUMMER The beauty of this utterly winning picture is that it doesn't live in a generational vacuum: Like the best films of its kind, its tale of young love (and all the accompanying trials and tribulations) will speak to all ages. Joseph Gordon-Levitt stars as Tom Hansen, a sweet kid who works for a greeting card company. Into the workplace walks new employee Summer Finn (Zooey Deschanel), and Tom is immediately smitten. Summer, however, isn't on the same page: More cynical in nature, she doesn't particularly subscribe to the notion of true love and sees Tom as a "friend with benefits." Tom does his best to keep their union afloat, but he obviously has his work cut out for him. Rather than spill the story in chronological order, this jumps back and forth to various points in the relationship, showing the pair happy one minute and gloomy the next. In the wrong hands, such a decision might have turned out unwieldly or awkward, but here the scenes flow smoothly, making sense not only narratively (on-screen markers always alert us to the day being shown) but also emotionally, allowing us to fully understand and appreciate how earlier incidents might affect the characters' mindsets during later ones. Ultimately, none of this would work without the proper actors, and Gordon-Levitt and Deschanel are adorable talents whose open faces and inviting eyes seem to allow audiences access to their very psyches. Because of them, we find ourselves completely invested in Tom and Summer, and their love story becomes our love story, warts and all. Don't miss the brilliant cameo of sorts by a Star Wars character, the result being the funniest moment in any film released thus far in 2009. ***1/2